That would've made HIS appearance a LITTLE problematic.

What about the Sea Hag?
dell
Top

Along with the Man From Atlantis.
'I thought Siren was perfect for Joan.'--Stanley Ralph Ross, writer of 'The Wail of the Siren'

how about......ABBOTT & COSTELLO ???? their careers were on the decline back then...but they were still very popular !!

Thinking outside the box, and with some trick photography...

Adam West in a window cameo

After the brief chat, the duo would remark "Seems I've seen that face somewhere before..."
Top

Along with the Man From Atlantis.

And the Creature from the Black Lagoon!
Top

Yes! And next week The Phantom! 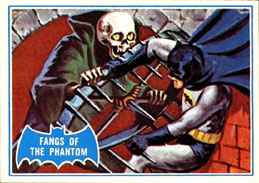 And then, The Grim Gladiator! 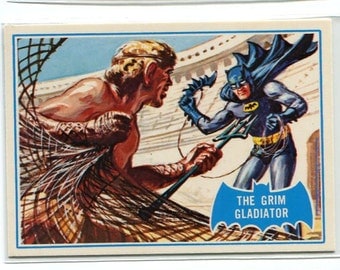 I always liked the Warlock and his 'Boiling Bath'.

The Phantom is clearly Lord Death Man incognito in Gotham, perhaps preparing for his window cameo.

A realistic window cameo I would have liked to have seen is J. Carrol Naish reprising his role as Daka-sensei from the 1943 serial, perhaps asking if the Duo had seen a radium gun. If Colonel Klink can show up, why not?
He flies and fights-BATMAN!
Purity and virtue-BATMAN!
Cowards run away!
Batman saves the day!
Also, Boy Wonder Robin.
Batman and Robin-caped crusaders at night!
BIFF! POW! BAM! BATMAN!
Top

It's too bad they never got the Wonder Woman actress from the unaired pilot, or any actor to portray Superman sticking their heads out the window.

Aquaman would have been fun to see, as he guest-starred in one of the newspaper continuities around 1966 or '67, didn't he?
Top

They should have got the guy from "It's a Bird, It's a plane ..." the Broadway show. I think his name was Bob Holiday. I used to have the Life magazine with Adam West leaping down in the bat-suit, and it mentioned the Superman musical as part of the 60's (current) comics craze. He could've played himself rehearsing, but in costume. That'd have been great! But instead they did Col. Klink, Lurch, Dick Clark and the carpet king. The Batman producers were often pretty short sighted. Let's face it Dick C Lark Ted Cassidy, Howard Duff and others were under contract to ABC . I think Werner Klemperer and Hogan's Heroes were connected to Fox in some way . the cameos were used for plugs.

As for Superman, there might have been rights issues. Filmation was producing the New Adventures of Superman for the fall Saturday morning schedule.ABC also might have been reluctant to have what looked like a plug for another network.
Top

clavierankh wrote:Let's face it Dick C Lark Ted Cassidy, Howard Duff and others were under contract to ABC . I think Werner Klemperer and Hogan's Heroes were connected to Fox in some way . the cameos were used for plugs.

Not to mention Carpet King supposedly gave Dozier a deal in exchange for the cameo.
Top

Through the magic of editing, a Forrest Gump window cameo would be great!

"I remember the time when me and mama went to Gotham City. I was in the hotel room and I opened the window to get some fresh air, and I met two nice men climbing up the side of a building. I invited them in for some Dr. Peppers, but they said they had to go because they was looking for a penguin."
/|\=^..^=/|\
Top

Elvis !
"Ah hey Batman, Robin, thank you for your great crime fighting. Thank you Verrr Much!"
The trigger: one of my riddles!
Top
Post Reply
47 posts