On the tiger trainer guy...the belt is so high that it's mere inches below the emblem! HAHAHA!
Top

I recall seeing a leotard with just the yellow oval and no bat up for auction.

I think they continued to either paint or silkscreen the area so the emblem would stick better.

Even Mark's costume had the yellow oval under the emblem...

The trainer may have worn the utility belt higher to give himself a bit more protection against the tiger's claws.
Every Day Is BATMAN DAY!
Visit & Like - https://www.facebook.com/batfanman66
Top

Yellow Oval wrote:By the way, as an aside, I'm not 100% positive, but when Otto Preminger's Mr. Freeze raids the dressing room of another beauty contest, one of the contestants has short brown hair and looks A LOT like the wife of the funny drunk who was watching the TV commenting on the Joker's Pagliacci encounter with Batman and Robin.

That same woman with the short brown hair is also in the Zelda the Great episode. When Zelda is dressed in black examining the Star of Samarkand you can see the actress with short brown hair wearing a leopard print hat off to the right of Zelda. Who is this woman? That's the third time I've seen her within two seasons. She has to be connected to the staff somehow.

Also noticed while watching Zelda that her hairstyle is short until near the end of the first episode when she is knitting while Aunt Harriet is hanging/running over the tank of fire. She suddenly has a thick, braided ponytail which disappears again in the second episode. I don't know what that was about!
"Hmmm... I don't like the twist this joke is taking. Let us away! Let us away!"
Top

Regarding the logo I have to say the Joker's Wild episode and the Zelda the Great episode are two of the times I can recall the logo being in it's actual proper position in the middle of the chest immediately under the cowl/cape cloth and not lower near the stomach where it seemed to be most of the time. I'm guessing the wardrobe person couldn't reach that high!

Batfanman wrote:The trainer may have worn the utility belt higher to give himself a bit more protection against the tiger's claws.

Perhaps, but if it had been me in the room with a tiger, I'd want that utility belt protection as "low" is it could possibly go...if you get my meaning!

Here is your mystery lady. Any other episodes she was in?

Yellow Oval wrote:Regarding the logo I have to say the Joker's Wild episode and the Zelda the Great episode are two of the times I can recall the logo being in it's actual proper position in the middle of the chest immediately under the cowl/cape cloth and not lower near the stomach where it seemed to be most of the time. I'm guessing the wardrobe person couldn't reach that high!

The Zelda, Mr. Freeze (Sanders) and Joker is Wild episodes were shown in the reverse order they were filmed.

Some other odd TV scheduling in relation to the filming of the first season:

*False Face was filmed just after the second Riddler (King Boris) episode, but shown three weeks after. Just after FF, the Joker high school eps were filmed, but shown the week before.

*Mad Hatter was filmed after Bookworm, but shown in February 1966, as opposed to Bookworm being held until the latter part of April.
Top

They make an effort to show us this table with the crystal glass before Mr. Freeze enters. While the angle of the shot is slighty different, the table and crystal glass are missing at the end, so perhaps we are supposed to believe the servant hit this table breaking the crystal even if he isn't standing where he would have hit that table (unless it's a very long table?). Also as noted, the man does shift his eyes before he falls.

Speaking of folks showing up more than once: 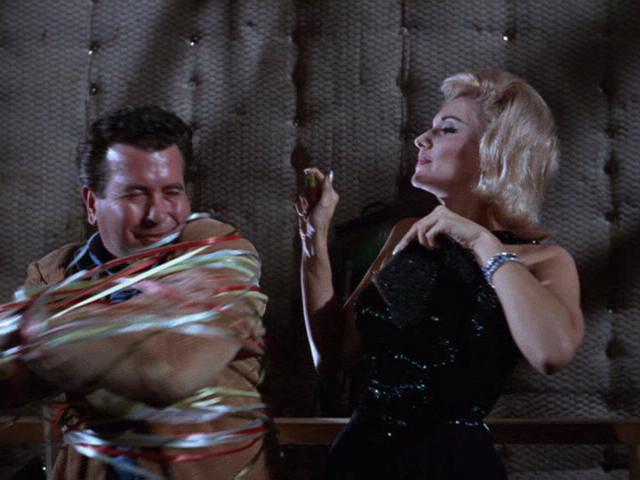 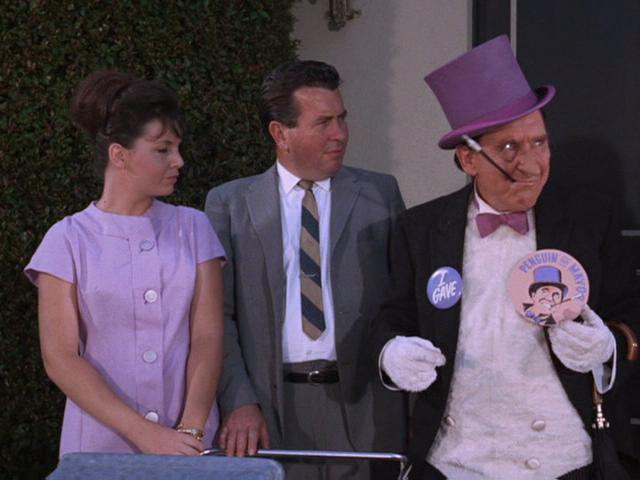 And while we're at it: 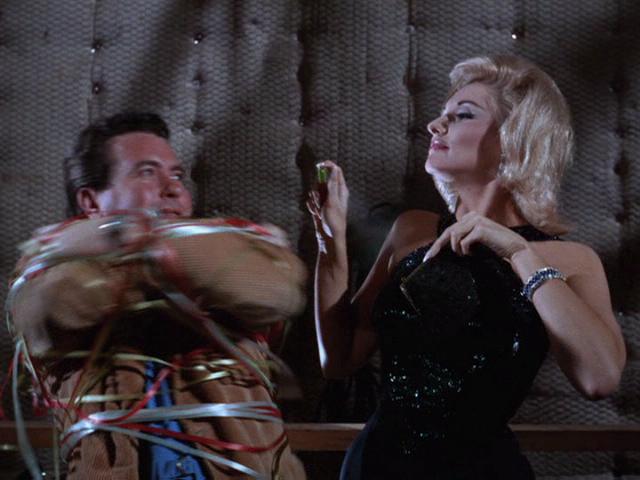 Good aim, Queenie - you just put your purse to sleep.

When watching "Joker Trumps an Ace/Batman Sets the Pace" last night I noticed...
1) in the fur salon you can see the caped Cesar take his position on his mark in the reflection in the mirror.
2) When Robin folds up the Bat Shield in Commissioner Gordon's office, he does a flourish with his cape (in an attempt to make you think he stashed is back in his utility belt) but then you see him throw it on the floor behind the desk. You can even hear the sound of it hitting the floor.
3) As Adam prepares to leave the Batcave up the service elevator back to Wayne Manor, he touches the cave wall and it wobbles.
4) Did anyone else see a foreshadowing of King Tut in the Maharaja's character?
Top

Joker's Zodiac Crimes
Batman puts out the fire in Commissioner Gordon's office, he then holds the Bat-extinguisher behind his back, as if he put back in belt, then drops on floor. you can here it.
When Penqy comes out of the box you can see the elastic string under his chin, holding his hat.
Batman's utility belt switches from square to round tabs- back and forth.
under the meteorite, Batman uses a Robin-rang instead of batarang.
@sdbatman66
@retrocoolnerd
https://www.youtube.com/channel/UCLfZhr ... K-KZxPt-gQ
Top

I just got done watching the Bookworm episode and I can see now why the character only lasted one episode. Not a very good villain I'm afraid. However, it was the first appearance of the "curved nose, checkmark eyebrow movie cowl." When Batman and Robin are in the Batcave he swaps cowls to the new one which will be seen almost exclusively from the feature film well into second season. I guess the one with the extended, painted ears was starting to turn purple and they had to start working in the new one.

This was also the first episode to feature a window cameo. And the famous blue van had TWO appearances in this one! The TV Van, and the Batmobile parachute pick-up service.

You'd think after having the Batmobile stolen so many times before (Riddler, Penguin, Tut, etc.) Batman would have figured out a fool-proof theft device by the time Bookworm rolled around. haha

And when Lydia is being interrogated in the Batcave, the 3 beeps that sound when she's telling the truth are standard ADR beeps. ADR stands for additional dialogue recording, and when an actor has to go into a recording studio and re-do lines of dialogue, those 3 beeps (or "3 pop" as its called in the business) gives the actor their "ready-set-go" cue for when the line they need to re-record is coming up. I guess since the sound mixer had them handy, he just threw them in.

But when I heard them my ears perked up, as I'm used to hearing them a lot in my biz.
Top

I finished off the first season tonight with the Penguin episode. A few quick observations...
1) For a split second you can see the little safety pin on the back of Adam's cape that's attached to the fish line that attaches between the sides of his cape.
2) Had the sensors seen this episode in Blu Ray, I'm sure a few scenes would have been cut. Particularly a few scenes featuring Finella in her bathing suit. (I'll say no more on that!)
3) When Finella pops out of the cake, I laughed to myself that the millionaires were "making it rain," to use a modern day colloquialism.
4) We get to see Alfred in a tuxedo again during the millionaires dinner at Wayne Manor during the final scene.
5) These henchmen were some of the oddest looking henchmen of the entire series. Octopus with his bald cap and bare feet, and Shark with his arched eyebrows and droopy eyes.
6) Finella tries to turn the Penguin's attention toward her with her hand and bends Burgess' foam latex nose a little in the process.
Top
Post Reply
240 posts