Sorry to have to post that my father, legendary kustom car king George Barris, has moved to the bigger garage in the sky. He passed on peacefully in his sleep at 2:45 am. He was surrounded by his family in the comfort of his home. He lived his life they way he wanted til the end. He would want everyone celebrate the passion he had for life and for what he created for all to enjoy. Thank you all for the posts and calls, your love is deeply appreciated. Peace.

George holds special place in my heart. I got to know George just a little over 10 years ago and had more than few wonderful adventures with him as he let me play Batman with his Batmobile. Always fun. Always smiling. Forever missed.

Very sad news, George was certainly one of a kind. He will be missed.
http://66batblog.tumblr.com
http://benbentleyphoto.com
Top

Ahhh man... very sad new indeed.
As a Hot Rodder, George and his brother Sam had a huge impact on me just about my entire life.
R.I.P. King George

my thoughts are with his family and Tony Wood rest well George you inspired so many
i'll stand at the bar i shouldn't wish to attract attention !
Top

He built the #1 Batmobile in the World!!!

RIP George. To the King!
Some days you just can't get rid of a ... SHARK!
Top

thankfully I was able to meet him a few years back.here on long island..got picture with him,,and autograph on my HOT WHEELS ELITE BATMOBILE...he was very nice and .. friendly,,, R.I.P. !
Top

My thoughts and prayers go out to Joji,Brett,and the Barris' family. I met George many years ago.We became friends,and did several Batman/auto shows together.I have some great memories of those shows.At one show,I won an award.George signed it for me.I also got to play Batman on a few occasions with him.I always wanted to include everyone.He was such a passionate man.He loved everything Hollywood/Kustom auto/Bike/gocart.He is a true hero and icon to me.He will always be the King of the Kustmizers.I love you George.R.I.P.
Top

Wife just told me. Strange, I took the day off today (contractor in the house) and I watched eight episodes. I thought the same thing I've thought for fifty years: Best Batmobile ever.

RIP Mr Barris. You shaped my world. Even my screen name is a Batmobile reference.
“What's important is that the world know that all visitors to these teeming shores are safe, be they peasant or king.”
Top

RIP George, and condolences to Brett. Best image I could get from my video from 2005: 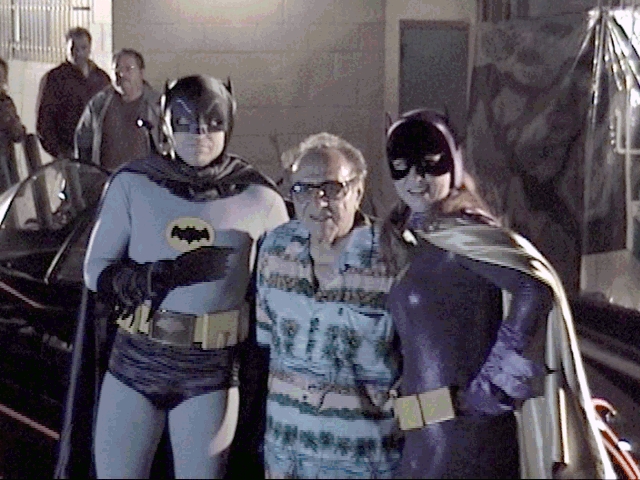 At least he and Shirley - and Sam - are together again.
"To the medical eye, such childish claptrap means only one thing, young man: You need some sleep."
Top
Post Reply
40 posts