With the much-anticipated "Batman: The Caped Crusaders vs Two Face!" featuring William Shatner (slowly and quietly) being produced, I decided to make a list of other actors who have made the cross over between Star Trek and Batman (the Adam West/William Shatner versions only).

•William Shatner - Captain Kirk himself - makes his Batman debut on the upcoming, "Batman: The Caped Crusaders vs Two Face!"
•Frank Gorshin played The Riddler on Batman and Bele on Star Trek's "Let That be Your Last Battlefield".
•Original Catwoman Julie Newmar played Eleen on Star Trek's "Friday’s Child".
•Lee Meriwether played The Catwoman in "Batman: The Movie" and Losira on Star Trek's "That Which Survives".
•Yvonne Craig who played Batgirl (aka Barbara Gordon) on the third season first played Marta on Star Trek's "Whom Gods Destroy".
•Malachi Throne (False Face) played Commodore José Mendez in Star Trek's only two part episode "The Menagerie".
•Roger C. Carmel (Harry Mudd on Star Trek) played Colonel Gumm on Batman ("A Piece of the Action"/"Batman's Satisfaction")
• Stanley Adams who played Cyrano Jones both on the Original Trek and the Animated series also played Captain Courageous on Batman ("Catwoman Goes to College"/"Batman Diaplays His Knowledge")
•William Schallert who played Nilz Baris on Star Trek's "Trouble With Tribbles" would later go on (as Retired Man) to accept an engraved watch from Batman in "Legends of the Superheroes".
• Lou Scheimer - In addition to producing both series, he also provided the voices of various secondary characters on Star Trek: The Animated Series as well as the voices for Bat-Mite, Clayface and the Bat-Computer on The New Adventures of Batman.
•Elisha Cook Jr. Played Icelander Professor Isaac Isaacson on the final epidodes of the second season of Batman ("Ice Spy"/"The Duo Defy") and previously represented Captain Kirk asthe rather unorthodox defence attorney Samual T. Cogley in the first season Star Trek episode "Court Martial".
•Joan Collins who played The Siren in the final episode of the seies also appeared as Edith Keeler in the first season Star Trek episode "The City on the Edge of Forever"

Did I miss anyone?
Top

I thought you were going to tell us about a 66 crossover comic. Darnit.

Sorry for the confusion. You never know what the future could hold.
Top

One that came to mind immediately was Leslie Parrish who played Dawn Robbins on Batman and Carolyn Palamas on Star Trek.
Top

There are probably others, but:

Sherry Jackson played Andrea the (unforgettably dressed) android in the Star Trek episode "What Are Little Girls Made Of?" and Riddler moll Pauline in "Death in Slow Motion"/"The Riddler's False Notion."

Ted Cassidy appeared as Ruk in the same Star Trek episode as Jackson, and did a window cameo as Lurch from the Addams Family in "The Penguin's Nest."

Teri Garr played Roberta Lincoln in the Star Trek episode "Assignment Earth" and made at least one uncredited bit appearance on Batman, fleeing the ice rink at the beginning of "Instant Freeze."
Top

Gene Dynarski played "Ben Childress" on the "Mudd's Women" episode of "Star Trek" and was Egghead's henchman "Benedict" in "The Yegg Foes of Gotham."

Probably lots of others.

What a shame we never got to see John Colicos or William Campbell as bat-villains!

^^^ I keep thinking Trelane could be the cause of a Batman66/Trek66 crossover.
To the Bat-Elephant!!
Top

He was a brilliant guy! In the same way as Victor Buono. And seemed universally well-liked. Like many in the Bat-Universe, he had a sad death. A lot of this is from Joel Eisner, of Bat-Book fame.

Team up with the Minstrel, Archer and Tut? The Title is perfect. IDW and DC are already doing crossovers so its could happen. Need Batman and Doctor Who also.
To the Bat-Elephant!!
Top

I let this topic run for awhile, we did a similar topic back in 2006 where we found over 30 connections with the '66 Batman and Star Trek (original series)

Here is a great photo

Malachi Throne (Falseface) voiced "The Keeper" in the Star Trek pilot 'The Cage', and played Commodore Mendez in 'The Menagerie' two-parter, which allowed them to reuse footage from "The Cage".

'The Menagerie' tends to make people (including myself) think Jeffrey Hunter had already died by this time, but he had not. Throne also voiced the narration for the original Star Wars trailer! Including his memorable turn as False Face, the only Batman villain not played by a "star", The guy made history several times!

Here he is with Bill Cosby on 'I Spy'. The only time I've ever seen him wearing a rug -- He looks good. He looks handsome! Like Jack Lord! Way to go, Malachi. 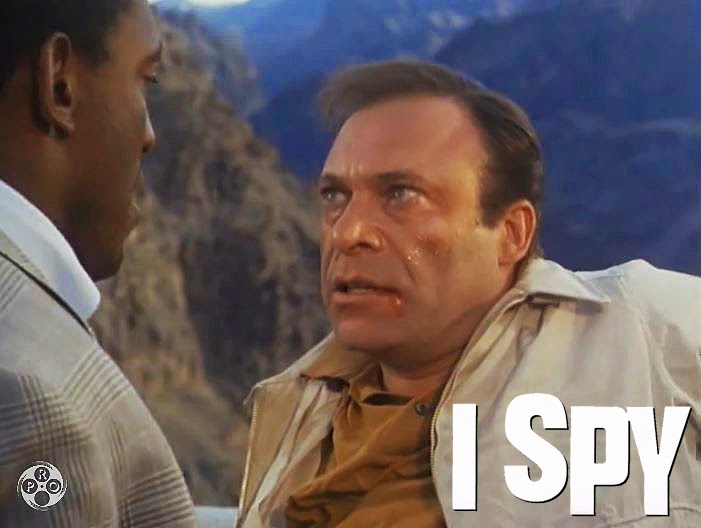 While watching Batman I just noticed that Jon Lormer, who played Dr Theodore Haskins in the Star Trek pilot "The Cage" also played Professor Dactyl on "How To Hatch a Dinosaur" on the 3rd season of Batman.
Top

I loved all the crossover acting talent!
www.racsocomics.com