With the new movie now available in the US via Digital Download from today (10th Oct 2017), I have started a new, separate thread in which we can talk about Batman vs Two Face without ruining it for anybody who hasn't seen it or might be waiting for the DVD/Blu Ray or perhaps is in another territory with a release later this month, like Europe and Australia for instance.

I'm looking forward to sitting down to watch it a little later today.
http://66batblog.tumblr.com
http://benbentleyphoto.com
Top

Just finished my first viewing and genuinely very much enjoyed it. I was unsure as to how I would feel knowing that this is Adam's final performance, but the bittersweet feelings I had washed over me as I became fully submerged in the narrative.

A fun story for sure and told in a visual style more akin to season one, which was really cool to see!

Some wonderful performances all around, not least by Shatner. It was great that Lee Meriwether also got perform this time around too. Wally's performance as King Tut steals the first act for sure, he did a superb job of channeling the tonality of Victor Buono as well returning as The Riddler.

For those of you who were all Batusi'd out and didn't watch to the end of the credits, they closed out with a fond farewell to, Adam.

Sweet! I haven't seen it yet (and really shouldn't be in here...) but I'm sure I'll love the movie if only for the fact that it's Adam West's final performance as the Caped Crusader. No one does it better.
- Boy Genius
Top

I was cautiously optimistic about this one because I'm such a huge Shatner fan but I was in the camp that was disappointed with the overall feel and way too jokey first one. I felt like that story was written with the very low brow feel of the 2nd and 3rd season writing and apparently the producers did too because at a panel at NYCC they addressed that and said this new movie would be closer in spirit to the darker first season.

Everything about this sequel was what I'd hoped the first one would have been. They overloaded it with villians again but unlike the first one they handled each one very well.

THE GOOD (and sometimes even GREAT)
1. Wally. His turn as Gorshin's Riddler is spot on again but he tops that with his take on King Tut. It sounds like Buono is back.
2. Shatner. He was brilliant as Two Face and Harvey Dent-- I mean that. And somehow Shatner doesn't sound like an 86 year old man. He sounds vibrant and vintage Shatner. He's not over the top in a Shatner way-- he's great and knew when to hold back.
3. Much better use of the Batman/Catwoman relationship, and although both Adam and Julie are sounding a bit old it's still nice to have them back here. Adam had a better performance this time than he did last time.
4. Lee Meriwether got a part here and that was great.
5. The character of Harvey Dent is clearly designed with vintage Shatner in mind-- Loved it!
6. The Music-- this time around it doesn't sound like they just popped in some stock music, it was much better placed and felt more in tune with the story.
7. A bittersweet goodbye performance for Adam. It's nice to see him go out on a high note but it's sad he's not with us any longer.
8. The story was much better this time around and much less juvenile than the first one. They did a nice job of figuring out how to put Two Face in the '66 Batman world.
9. The humor was used correctly here. Not too over the top. No wincing moments like I had with the first one.
10. This would have been a really good live action movie.

THE BAD (or maybe just weak)
1. Aunt Harriet. I never thought it would be possible to make her more annoying and less appealing than she was on the show but they did it. The clues that she knows something about Bruce and Dick's relationship are still there with no resolution to it. Just don't like her.
2. The story although as I said above is better, at times it felt disjointed and almost like they strung several episodes together. I would have liked to have had Tut have more of a role in the whole plot especially since they both share the Jekyll & Hyde persona.
3. I don't understand why they record performances seperately in animation, Wally can certainly chime in for me here, but it hinders the performances because you're never going to get the same quality of performance from actors if they are all recording their lines alone to be clipped in together later-- even if someone is reading the other lines against them. It also eliminates any kind of ad lib or last minute change to the script that can really make the whole project better. I know in the history of animation some films are done with the full cast assembled and this should really be the norm.

That's it-- is it worth watching? Absolutely.
I liked it much better than the first one which I've barely been able to get through.
Nice job by everyone involved.
Artist-Writer
http://WWW.ANDYTFISH.COM
Top

How was Burt's performance? In the first one he sounded like he did in 1966.
Top

I LOLed big time at both times the Joker winked at Harleen Quinzel because... you know.

This story had the right amount of mystery to it once it got going. Not that it was bad to start with King Tut and Bookworm because they were both terrific characters and spot on impersonations. I'm not sure if I was OK with Harvey looking normal yet ultimately being revealed to be answering to himself as Two Face. I'd have to rewatch it again to see what I missed. But I did enjoy that it was darker than the first film and on par with the first season. I'm definitely ready to break out my DVDs again.

Watched it today. I won’t put a ton of spoilers this early but figured this was a safe thread. Echoing the statements above, I think this one is better. This is what I’d hoped for with the first one. It’s very much in the vein of the first season of the show.

I’ve never really understood how the TV show has became more famous for the silliness of the last season vs its mirroring of the comic books the first two seasons, with some episodes lifted directly from then-current issues.

The first animated movie seemed to have been written & marketed to speak to the modern perception of the original show instead of actually emulating the original show. This second one feels as though someone took notice of the discrepancy and made a conscious effort to correct it.

This will be the one that I watch more often. Great performances all around, including Shatner. I get the feeling he understands the reality v perception of the TV show I mentioned above. He plays Dent the way Adam played Bruce Wayne. Well done, Mr Shatner. This could have easily been played over the top but he chose not to.

It was strange knowing it was Adam’s last time as Batman, but at least we got one more. It’s a gift. So is having my childhood-lifelong hero around and relevant for the past 50 years.
“What's important is that the world know that all visitors to these teeming shores are safe, be they peasant or king.”
Top

The first one was indeed good and I'll admit got better once Batman started feeling the effects of Catwoman's Batnip slowly but surely. Yes, that did get out of control but it was enough to make seasoned viewers go wide eyed. It was indeed campy. This one was much more faithful to the first season and did it well. It may not have been a direct translation of the "lost episode", but it did its job well.
Top

Look for both the 1939 and what might be the serial costume in glass cases in the Batcave,
Artist-Writer
http://WWW.ANDYTFISH.COM
Top

As much as I liked the first one, this one is better, in alot of ways.
Much closer to 1st season, as already mentioned. It does seem like a few episodes sewn together, but so did Return of the Caped Crusaders. Maybe an easier sell to t.v. markets?
Burt still sounds the same, Wally crushes as Tut ( weird he is not in whole movie tho), Julie is still sensual, and Adam'Smith performance is top drawer.
It is worth noting that Shatner never really does "Shatner ". That tempo you might expect is not there, and he is awesome.
On to the 4th viewing Chums!
@sdbatman66
@retrocoolnerd
https://www.youtube.com/channel/UCLfZhr ... K-KZxPt-gQ
Top

Watched this again last night with Mrs Fish who refused the first showing because she was not a fan of RETURN OF CC --she liked this one a lot and I have to say it not only held up but I spotted things I missed the first time through. I'd watch this again and probably several times unlike the first one which I would only watch again if I were held in a North Korean Prison and Cooking With The Imperial Leader was pre-empted by it.
Artist-Writer
http://WWW.ANDYTFISH.COM
Top

Oh boy, guys on their 2nd and 3rd viewing already. I am still awaiting the dvd release. I guess I'm behind the times here..
Top

It was interesting to notice that when Batman and Robin slid into the Batcave on the Batpoles, they had the sliding doors added from the old filmation series. 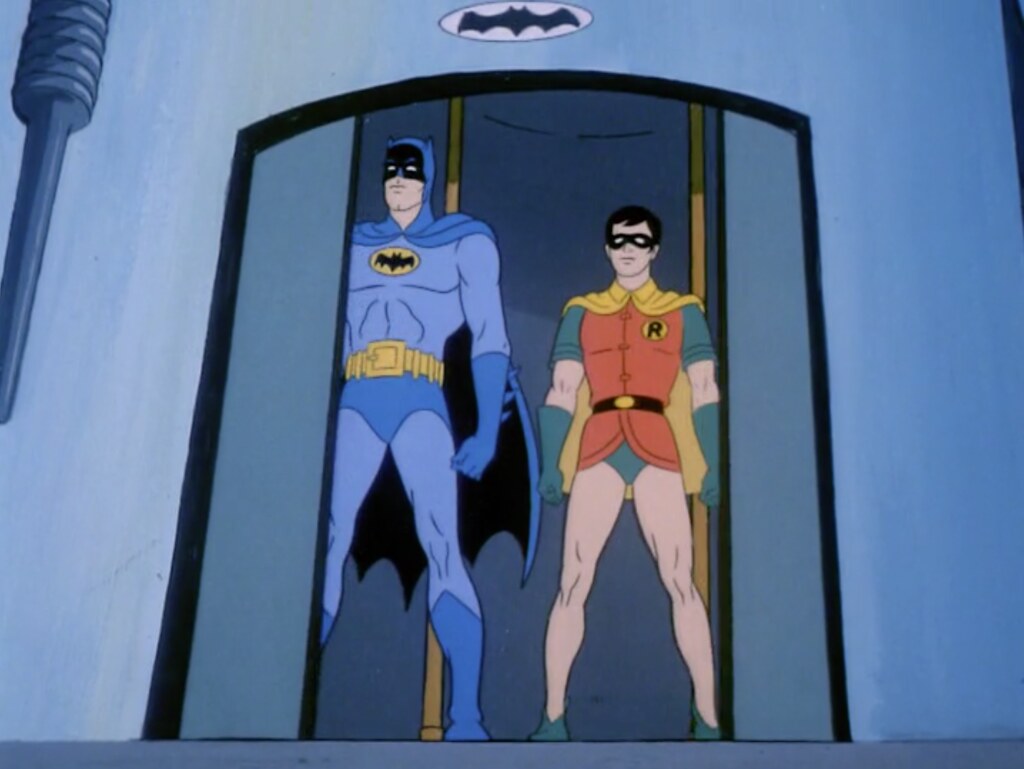 I've not heard it mentioned but I personally don't love the box art-- the composition is too sparse. It's better than the previous one in terms of invoking what you get when you buy it but I still don't love it. Planning on designing my own if I buy the Blu Ray.
Artist-Writer
http://WWW.ANDYTFISH.COM
Top
Post Reply
22 posts