The show was losing money big-time by the third season and despite the rumors, there was never any consideration to do a 4th year. (NBC was never interested.)

The reason? Dozier was hot to get Batman into syndication ASAP because that's where it would finally turn a profit. Here's an industry trade ad offering the 120 episodes from February 12, 1968. 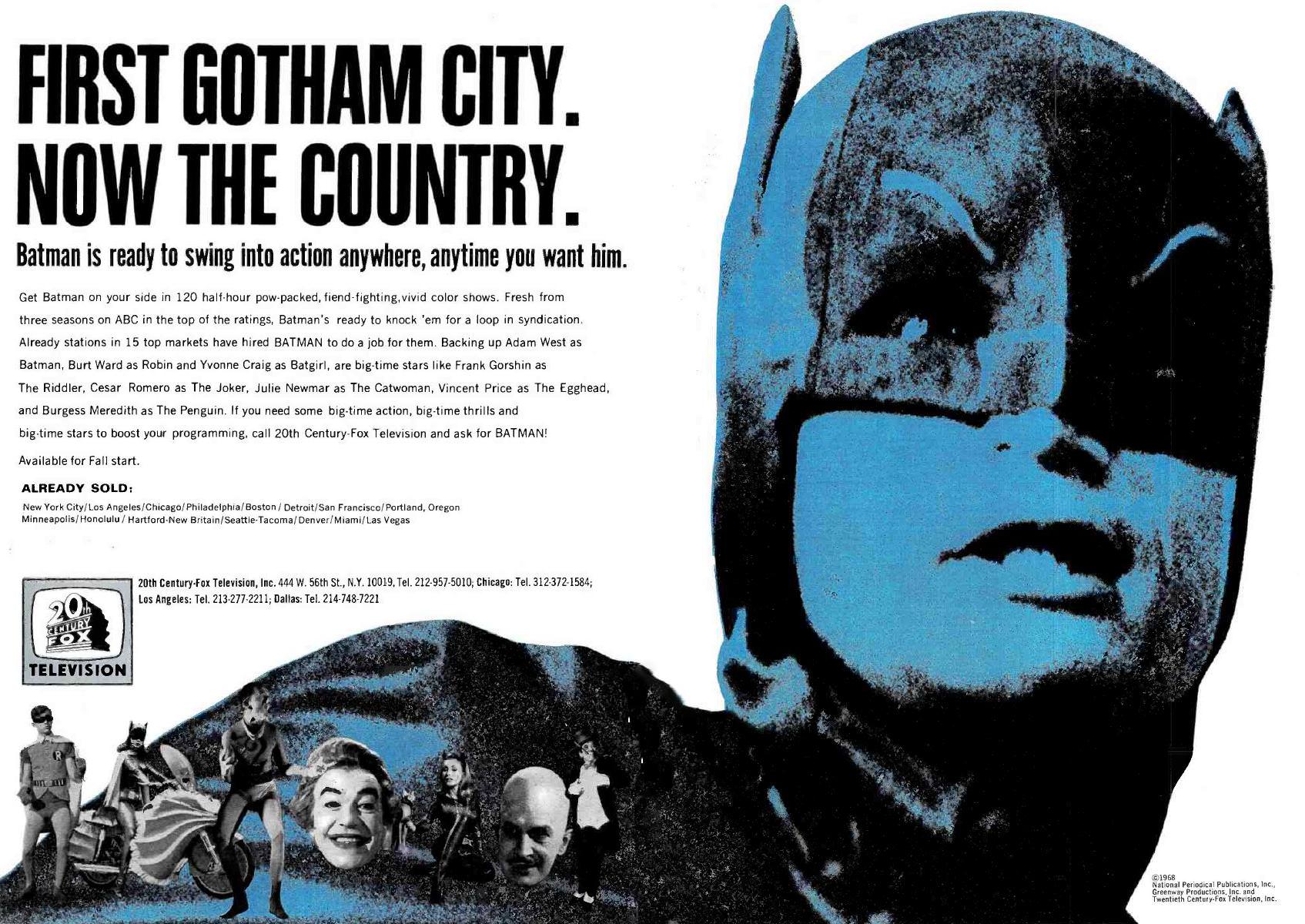 The fourth season myth makes for a good story but there's never been any proof NBC even considered it-- even though most of Dozier's records and correspondence has been made public.

Considering the decline of the show from the first season to the second and then the second to the third I'm glad they didn't go to Season four.

I think we got a glimpse of what it would have been like with the LEGENDS OF THE SUPERHEROES specials from 1978/79
Artist-Writer
http://WWW.ANDYTFISH.COM
Top

They knew is was over. See this August 1967 quote from Burgess Meredith:

Holy mackerel, they went ballistic! Adam said this, Yvonne said that, they wouldn't lie, etc. Apparently, the source of this claim is a "respected member" of their community.

Thanks so much for posting this. Great information.
Top

Thanks for posting all this, Bob, and it's unfortunate that people would prefer to believe the myths instead of the truth. I appreciate you setting the record straight.
'I thought Siren was perfect for Joan.'--Stanley Ralph Ross, writer of 'The Wail of the Siren'

Great digging. Many people don't realize that they couldn't syndicate a major network show that was still in production back then like they can now.

If they did, they'd usually change the title on the syndicated episodes; e.g., Gunsmoke/Marshal Dillon.
"To the medical eye, such childish claptrap means only one thing, young man: You need some sleep."
Top

Plus, as the ad shows, it was being sold into syndication while still on the network. It's worth noting as well, the third season did not have reruns in 1968.

Here in New York, WPIX began running it for a full hour, five days a week starting in September 1968. It was off the air in this market for just six months.

The show hit like a rocket but ratings began to dip as early as April/May 1966. The summer dipped further (reports speculated that kids were out playing when the show came on) and the fall got off to a weak start. In addition, the movie under-performed at the boxoffice.

LOST IN SPACE in color took away the Wednesday audience and that's why Dozier eventually stopped the recaps at the start of Thursday night. The three-parters were another attempt to win back the Wednesday audience. The show was on life support by season 3 and that's why the budget was slashed. That quote from Burgess Meredith is very telling. It's also very telling that ABC wouldn't even commit to a full season; just 17 shows initially for the last year.

With this in mind, why would NBC have any interest? The producer was looking to turn a profit and had his eye on syndication for a long time. If there was genuine interest, some paperwork would survive in the Dozier files. There's nothing. Instead, we have a rumor published in a book and later repeated by members of the cast. Of course, it must be true.
Top

AndyFish wrote: ↑Wed Mar 14, 2018 2:10 pm The fourth season myth makes for a good story but there's never been any proof NBC even considered it-- even though most of Dozier's records and correspondence has been made public.


Considering the decline of the show from the first season to the second and then the second to the third I'm glad they didn't go to Season four.


...and if a 4th season was even half of what Legends turned out to be, it would have been a total disaster--probably preventing the series from holding up to its current level of consideration in pop culutre.

Here's an interesting add-on--Adam appearing on a March 1, 1968 segment of Hollywood Squares, sporting a slightly different hairdo, and the biggest point of interest: a moustache--

While its not completely uncommon for actors to change their appearance between season of a continuing series, as far I can tell, Adam did not after season 1, the movie, or season two. His "new look" (Bat-pun not intended) could suggest the word of the series' cancellation came down early on in season three's production, granting him the freedom to shed the "Bruce Wayne" look. It seems Adam had already moved on, even though to the TV-watching public, Batman was still a 1st run series on ABC, while everyone at Greenway/Fox--from Dozier all the way down--knew it was over and done.

The idea of a 4th season comes off as pure myth.
Beneath Wayne Manor
Top

News of the cancellation hit on January 18, 1968 and by the end of the month, Adam was sporting mustache and sideburns and preparing for a violent western as part of a three film deal with Romar.

He wasted no time in trying to establish a new image!


THE GIRL WHO KNEW TOO MUCH began filming on June 11 while his western was delayed. In the meantime, he did a spot playing a heavy on THE BIG VALLEY.

He was working hard to spread his wings and get away from the Caped Crusader.

How is the 4th season myth still living on with this information around?
Beneath Wayne Manor
Top

Partly because nobody has bothered to do the hard research, and many people like believing the myth. You should have read the nasty comments on the Facebook page. "So you're calling Yvonne a liar," etc.

Besides, at that point, I don't think you could have offered Adam enough money to do another season.

The whole fabrication is absurd. Anybody who's worked on a production knows that standing sets are not "bulldozed," they are taken apart in pieces just as they are assembled.

Can you imagine the dust if bulldozers starting ripping apart sets on a 40+ year old soundstage!
Top

I've said it before but i'll say it once more, thanks again for the hard work you've put into this specific topic. My own research into Dozier's papers is merely supporting evidence for the groundwork you laid.


Bob Furmanek wrote: ↑Thu Mar 15, 2018 10:42 am Partly because nobody has bothered to do the hard research, and many people like believing the myth. You should have read the nasty comments on the Facebook page. "So you're calling Yvonne a liar," etc.

I had that exact interaction with someone literally a week ago when I waded into a comment thread to dispell the "NBC Myth".
http://66batblog.tumblr.com
http://benbentleyphoto.com
Top
Post Reply
75 posts