What all is there of the 60's Batman Series?

adventuremaster18 wrote: ↑
Wed Apr 25, 2018 9:08 am
Has the Green Hornet been officially released anywhere?

No, it has not. Several years ago, Bci/Eclipse released an unoffical DVD of the 1974 compilation film The Green Hornet (as it was titled in the U.S., designed to cash in on Bruce Lee), while Bonzai Media Corporation packaged the 1976 follow up, Fury of the Dragon. Both look like the 35mm film was dipped in mud, then transferred on a deck from 1980! No kidding!

If you're looking for The Green Hornet episodes where the Batman TV series is playing on TV sets, you can try youtube for the episode "The Secret of the Sally Bell". I think there's another episode with a clip of Batman & Robin in the middle of a Bat-climb, but I cannot recall the episode.


Lastly, should I even bother trying to get Legends of the Superheroes?

If you're more of a completist, then I guess you would want it. As a matter of quality, it is horrible, with West and Ward looking very much their late 1970s ages (in other words, not at all like the TV series), with poorly fitting costumes all in the middle of terrible attempts at comedy, and self-parody that only served to sell the false idea that 1966 Batman was a joke.

I will not compare it to high quality superhero productions of the 70s (e.g. Superman the Movie & The Incredible Hulk TV series), but Legends even suffers compared to the relatively low budgeted Shazam! TV series from Filmation.

Wow! I didn't realise till just now that this skit featured Batman with the Green Hornet and Kato!

by TP-6597
I didn't see this in any of the links (may have missed it). Adam West playing himself discussing the actors who played Batman since.

by Kite Kid
Even more can be found in the following; I would add these to the list:

Selected episodes of the animated series "Batman: The Brave and the Bold," in particular:
* "The Night of the Huntress" and the teaser of "Day of the Dark Knight": Both have cameos by Mad Hatter, Egghead, Archer, Bookworm, False-Face, King Tut and Louie the Lilac. Black Widow, Ma Parker, Shame, Siren, Clock King and Marsha, Queen of Diamonds also cameo in the latter.
* "The Color of Revenge": Flashbacks to the time of the TV series, with a glimpse of the Shakespeare bust and other homages. (Special guest villain: Crazy Quilt with a villainous appearance by Solomon Grundy).
* "Chill of the Night": Adam West and Julie Newmar guest star as the voices of Thomas and Martha Wayne.
* "Mayhem of the Music Meister": Cameos by all the villains from "Day of the Dark Knight" and a mention of the Batusi and Shark Repellent in the lyrics of one of the Music Meister's songs.
* "Plague of the Prototypes": Guest starring Adam West as the voice of the Proto Bat-Bot.
* The two-part episode "Deep Cover for Batman"/"Game Over for Owlman" depicts a previously unseen area of the Batcave containing "souvenirs" of some of the Joker's deathtraps: the giant key from the Human Key Duplicator ("The Impractical Joker"), the slot machine-controlled electric chair ("The Joker Goes to School") and, of course, the giant clam!!!
* "The Mask of Matches Malone": Louie the Lilac makes another cameo.
* "Battle of the Super-Heroes": In the teaser, King Tut is once again defeated by buttermilk!
* "A Bat Divided": The connection here is a bit tenuous, but Simon the Pieman and Sweet Tooth (from the two Filmation animated series, respectively) appear in the batfight.
* "Joker: The Vile and the Villainous": King Tut and Shame make further cameos, along with cameos from Chief O'Hara in his only appearance in the series and, of all people, Gladys Ormphby (Ruth Buzzi's purse-wielding "Laugh-In" character). The Joker's extra special guest villain in this episode is The Weeper (Tim Conway guest stars as his voice.)

"Beware the Gray Ghost": An episode of "Batman: The Animated Series" that guest stars Adam West as the Gray Ghost, a TV superhero who inspired a young Bruce Wayne.

"The Wizard": An episode of the 1990 "Zorro" series guest starring Adam West as Dr. Henry Wayne (ancestor of Bruce?).

"The Monkees Blow Their Minds": "The Monkees" episode in which Burgess Meredith cameos as the Penguin.

"Large Marge": An episode of "The Simpsons" containing bits of a "lost episode" where Batman and Robin (voiced by Adam West and Burt Ward) face Clownface and his henchmen Hoo, Hah and Hee.

In addition to the above, Catwoman's henchmen Leo and Felix turn up in the animated film "Batman and Harley Quinn" in a nightclub where "all the cool henchpeople hang out." Leo mocks Batman by dancing the Batusi behind his back.

by Kite Kid
If anyone is interested, I edited my post above to include some more 60s Batman references in a few additional episodes of "Batman: The Brave and the Bold" and the animated film "Batman and Harley Quinn." 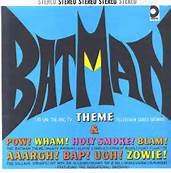 
This music LP isn’t “official” merchandise but IMO if you want the FULL “Batman Experience”, you HAVE to listen to this record while clicking through the Batman ViewMaster reels you got in your Christmas stocking.

Pretend you are a kid who sees this album at the Musicland record store and your sister buys it for you and you play it thinking it’s from the TV show you heard about but never got to see. When you finally see the Batman TV show years later, you realize, hey, they got the music wrong! ..ok, that was MY experience as a kid, and it was cool. I will always love that record!

It’s some cool jazzy “detective music” to play while you’re driving at night or on a rainy day.

by Blue Meanie
Yeah, the “Bat Boys” album pictured above is pretty cool and has a jazzy vibe to it with a groovy Hammond (at least I think it is) organ throughout. I enjoy those Batman and 007 cash-in albums from the ‘60’s as many of them had top flight studio musicians playing on them and not bad for what they are.

Kite Kid wrote: ↑
Mon Nov 12, 2018 8:54 pm
Catwoman's henchmen Leo and Felix turn up in the animated film "Batman and Harley Quinn" in a nightclub where "all the cool henchpeople hang out." Leo mocks Batman by dancing the Batusi behind his back. 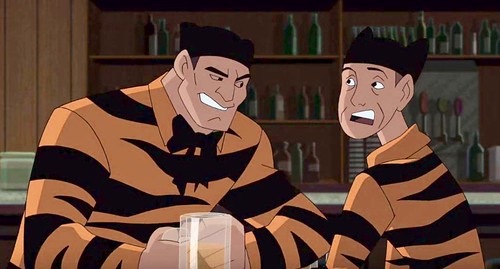 Familiar henchmen in "Batman and Harley Quinn" by Ian McLean, on Flickr 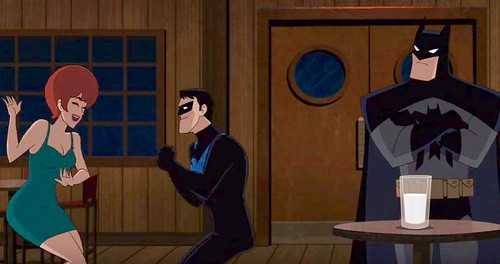 Batusi in "Batman and Harley Quinn' by Ian McLean, on Flickr

Also a glass of milk cameos. 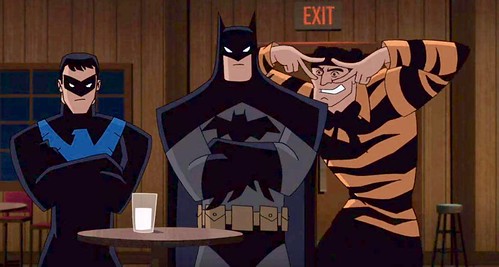 Catwoman henchman in "Batman and Harley Quinn" by Ian McLean, on Flickr
All times are UTC-07:00
Page 2 of 2
Powered by phpBB® Forum Software © phpBB Limited
https://www.phpbb.com/