by bat-rss
I'm curious about the name "Biljo". Is that "J" pronounced in the English way, the Spanish way, the Nordic way...? We're doing a "TO THE BATPOLES" on "Batmania" soon, and I don't want to pronounce it wrong!

by bat-rss
And another question -- am I gleaning correctly from the first issue that Batmania was built off another newsletter, Komix Illustrated? Batmania seems to have had a lot of resources -- many other Batfans quoted, and apparently a decent mailing list -- right from the get-go.

Well, I do see that publicity on Batman comics' letters pages brought his readership up in a hurry, he couldn't have known that was going to happen as he was writing the first issue.

by bat-rss
Well, from continuing to read the newsletters I found the answer to my first question -- his name was William Joseph, so it's the usual English "J" pronunciation!

I'm still not sure where he rounded up his initial round of readership, though.

by P “Junior Batman” Y
Andy: Thanks so much for sharing BATMANIA and for your contextual notes. Tim and I are recording not one but two shows about the 'zine this week and next. Outstanding historical resource. Makes me want to start cranking out my own 'zine on a mimeograph machine. To heck with the Internet!

by Dan E Kool
On an unrelated note, your new avatar is bomb, Andy.

AndyFish wrote: ↑
Thu May 31, 2018 5:18 am
Batmania had the tacit approval of DC, after White sent a copy of his first issue to renowned fan-friendly editor Julius Schwartz, who liked it

In 1989, two Aussie Batman fans - to their great surprise - managed to get "kind permission", from DC Comics' Phyllis Hume, to run a Batman club we called "Battalion" (she said that was a clever title that stretched the "no Bat-prefixes" rule) and published a newsletter called "Utility Belt".

All we had to do was send each issue to her in NYC - she gave written feedback on issue #1 - and we lasted eight issues (originally announced as quarterly, but we took four years to put out the eight). 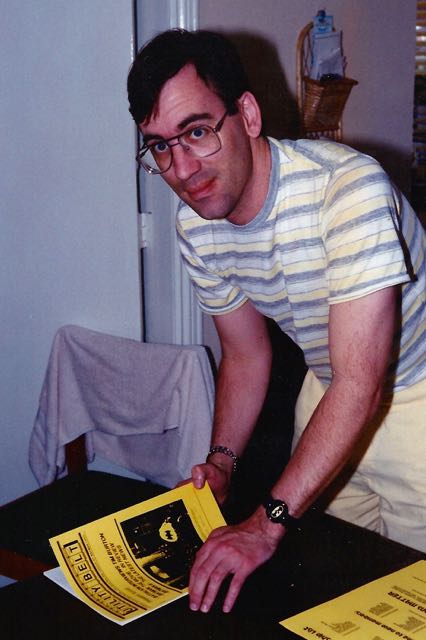 Therin of Andor wrote: ↑
Sun Sep 02, 2018 12:14 am
In 1989, two Aussie Batman fans - to their great surprise - managed to get "kind permission", from DC Comics' Phyllis Hume, to run a Batman club we called "Battalion" (she said that was a clever title that stretched the "no Bat-prefixes" rule) and published a newsletter called "Utility Belt".

Someone had added me to the "Fanlore" wiki a few years ago and I noticed numerous errors, so was correcting as much as I could this week. While my "Batman" fannish activities were briefly mentioned, I realised a lot more could be said about "Battalion, the Australian Legion of Batman Fans" (1989-1993).

When I get my eight issues of "Utility Belt" newsletter out of storage, I shall annotate them.

by gothosmansion
Thanks for the post, Andy. You always share some interesting stuff.
All times are UTC-07:00
Page 2 of 2
Powered by phpBB® Forum Software © phpBB Limited
https://www.phpbb.com/