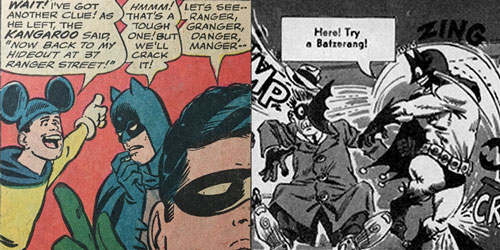 When Batman was the hottest show on TV, it naturally became a major target of humor and parody as well. In episode 115 we looked at a couple of contemporaneous Bat-parodies from 1966-67, and this episode we examine three more:

*The Adventures of Jerry Lewis no. 97, featuring the actual Batman and Robin, who are both dealing with the effects of West/Ward Batman on their own lives, and acting in ways that parody their TV counterparts;
*the CRACKED magazine parody "Batzman meets the Green Horned Bee"; and
*"Ratman and Bobbin In The Clipper Caper", an audio parody by folk-music outfit The Brothers Four!

Plus the CPCC Band version of the theme, deja vu from the Petrie household, and your mail about our "I'll Be a Mummy's Uncle" discussion!


http://tothebatpoles.libsyn.com/122-par ... t-parodies
"I'm half-demented with whimsical outrage!"
-- The Joker, in a line cut from "The Joker's Epitaph"
Top

I must have a lousy sense of humor, because I enjoyed the Jerry Lewis issue more than you did. I wasn't really expecting to like it, but Batman and Robin dealing with the after-effects of the show on their image was a pretty clever idea.

You mentioned not having a lot of familiarity with Bob Oksner. He was mostly a humor artist in the 60s. He did Jerry Lewis and a lot of Angel and the Ape. To further my rep as the "dirty old man" of the audience, Oksner was also a very good "good girl" artist, and did some really beautiful Supergirl work. In the late 1970s, he did covers on some of the Superman titles and was one of Curt Swan's inkers on interiors.

Oh, the only other issue of Jerry Lewis that I own is the Wonder Woman issue. I admit that I was looking forward to seeing Oksner's take on Diana. However, this was during the "powerless Diana" era. She injures her ankle and Jerry has to dress in drag and take over for her. Considering Oksner's talent for drawing pretty girls, that is not the plot I wanted to see.
Top

Good show, guys. I was familiar with the Jerry Lewis comic series only from the DC house ads in my family's 1960s comics, but never had a desire to read one--including the one with Batman and Robin as guest stars. Between the Lewis comic, Cracked and MAD, I see a pattern in their satires: breaking the fourth wall to take aim at the behind the scenes issues as much as anything else.

It seems the various parodies either did not know how to create a straight parody of the TV material, or thought it was more interesting to dive into the cultural impact of Dozier's brief run, hence the focus on merchandising, imitators on the street (and on TV), actor squabbles and fads in the broad sense, etc.

Perhaps it was wise to adapt the Dozier series in that way, because Batman and The Green Hornet occupied their own universe, and to the talents at MAD, Cracked, DC and Marvel, they would be more aware or sensitive to ideas such as creator greed, jealousy, overblown trends, because that was an issue in their own field.

Whatever the case might have been, at least the Dozier series received a good amount of parody coverage in the 60s, instead of decades later, when it became "cool" to mock certain old series (e.g. Leave it to Beaver).

There's one more parody that slipped my mind: "The Mean Hornet!" from Not Brand Echh #9 (August, 1968). At first glance, you might wonder why Marvel was barely getting around to a Green Hornet parody more than a year after the series had been cancelled (even Batman was gone by the time this issue hit the newsstands), but author Roy Thomas was clever in opening the piece by asking:

"Ya don't remember that, huh? Well, don't feel too downhearted, Charlie! Apparently, nobody else does, either..."

So, a few introductory lines covered Marvel's late-to-the-game adaptation. which sort of walk the same path as Cracked and MAD: 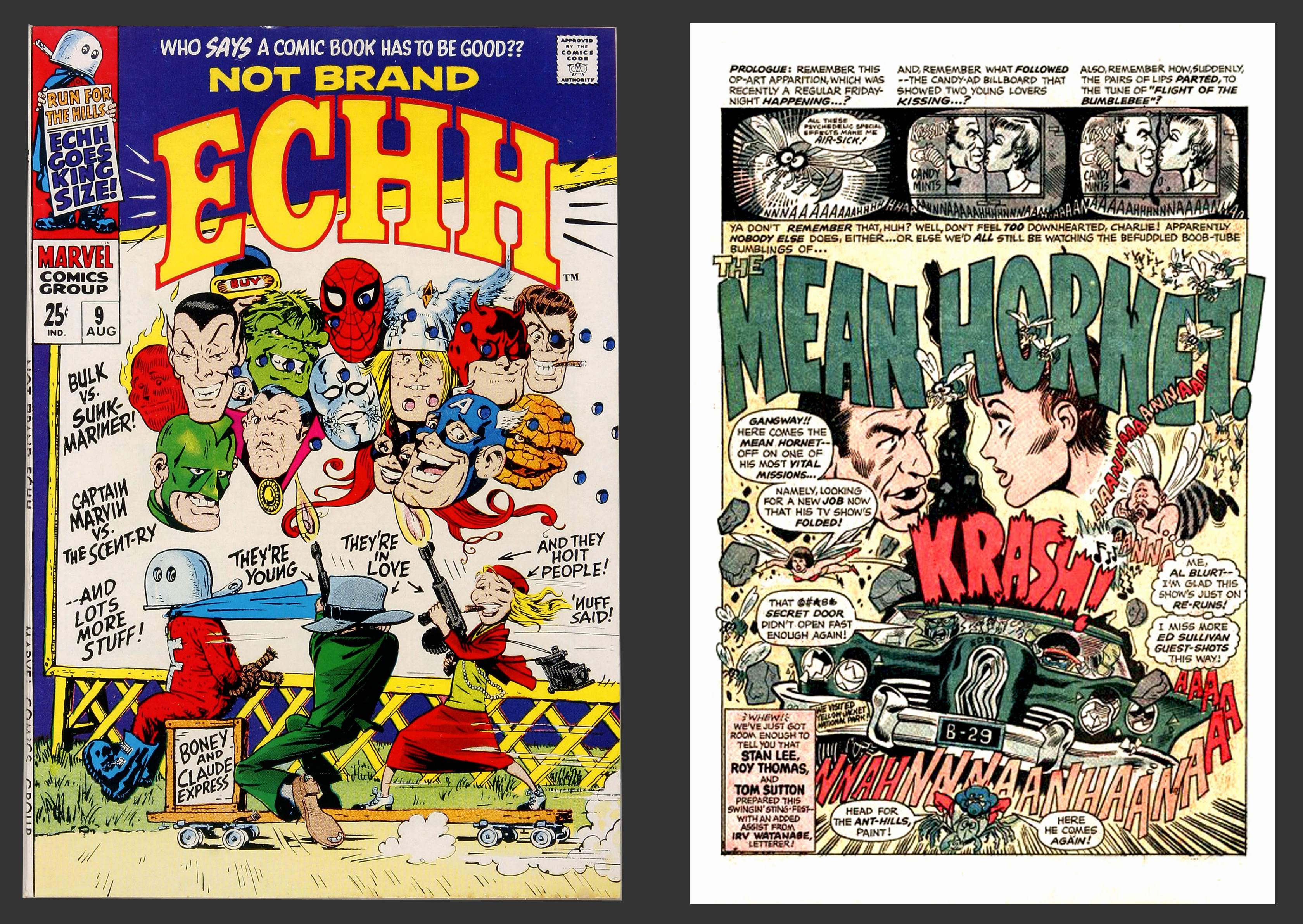 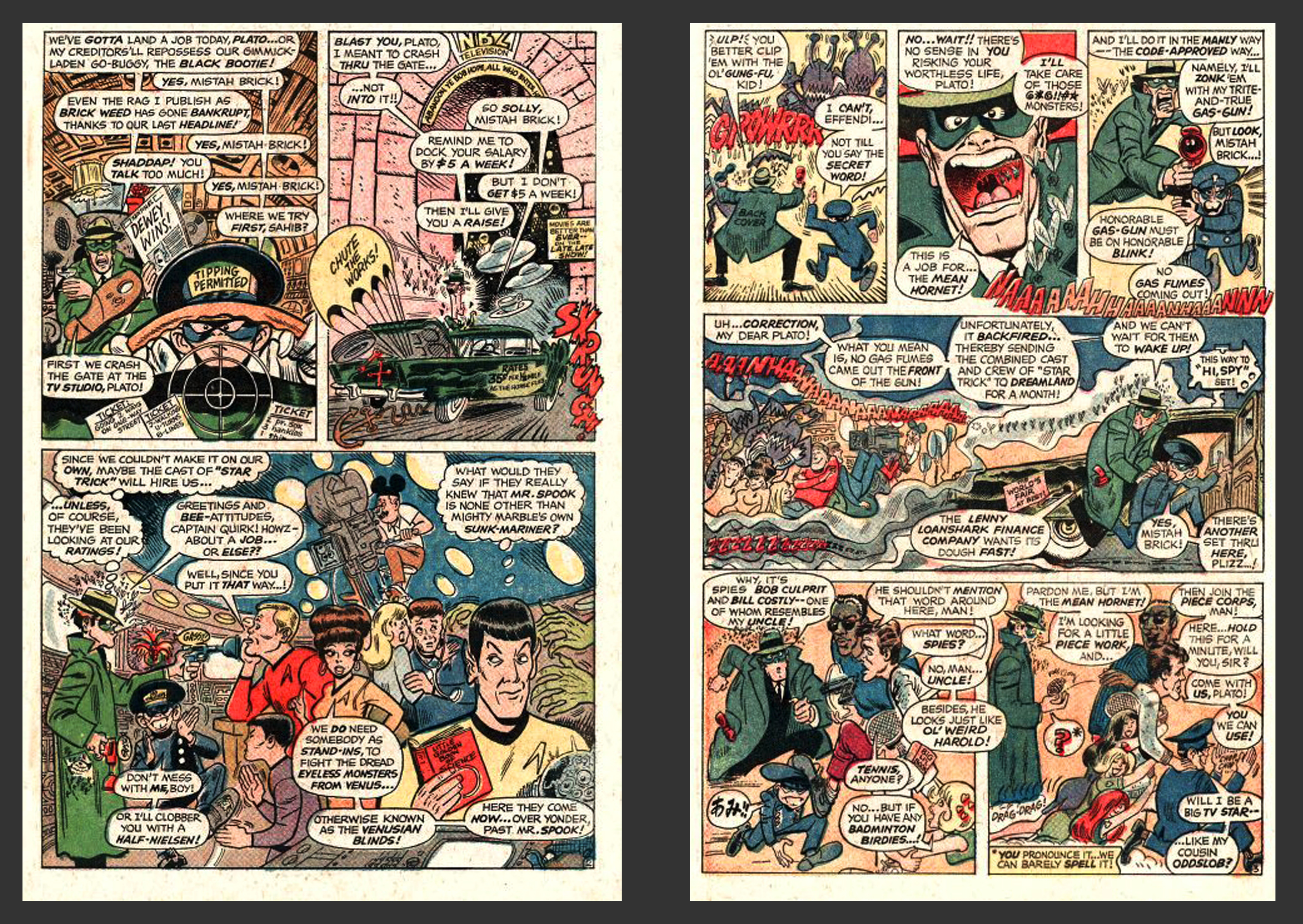 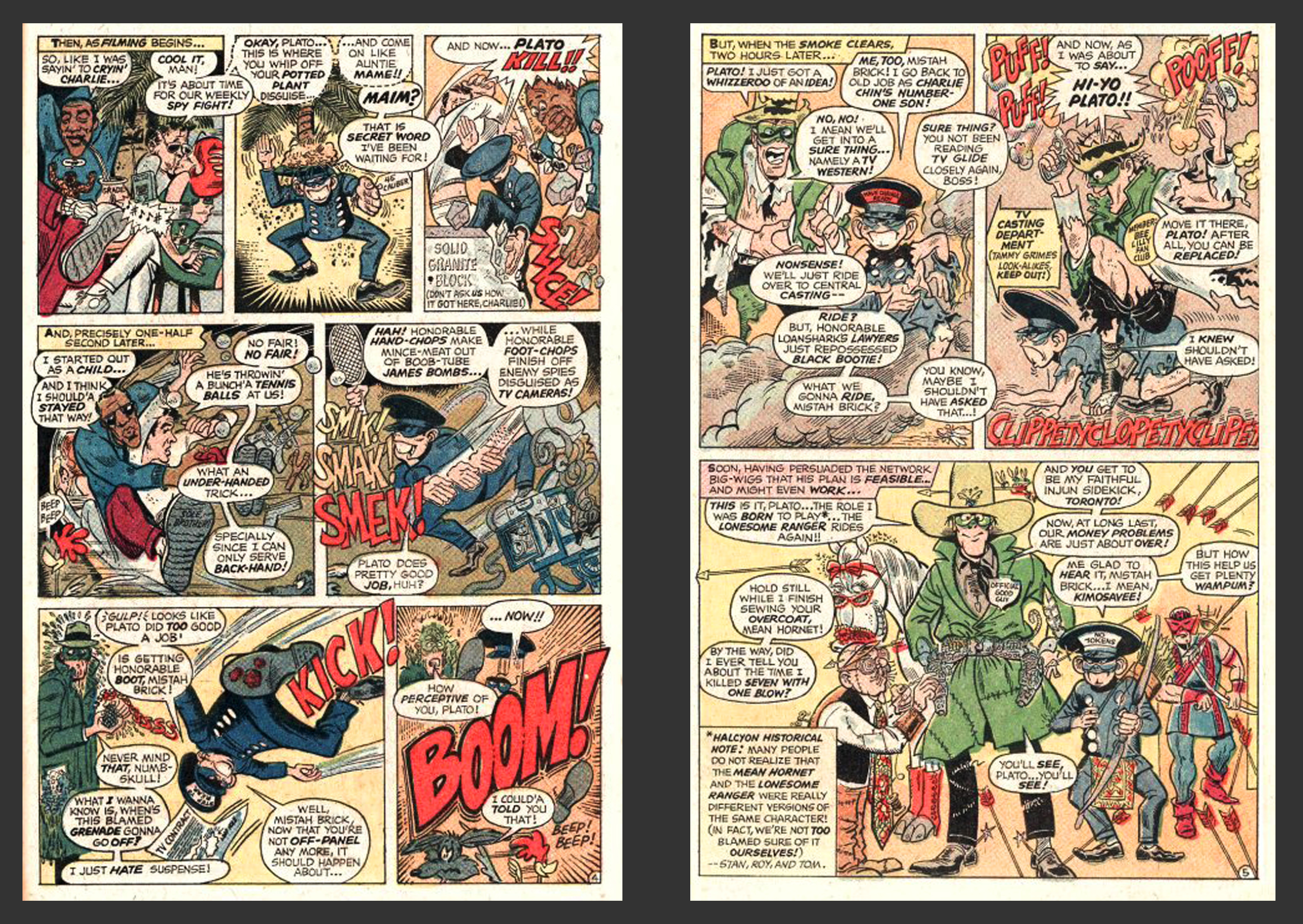 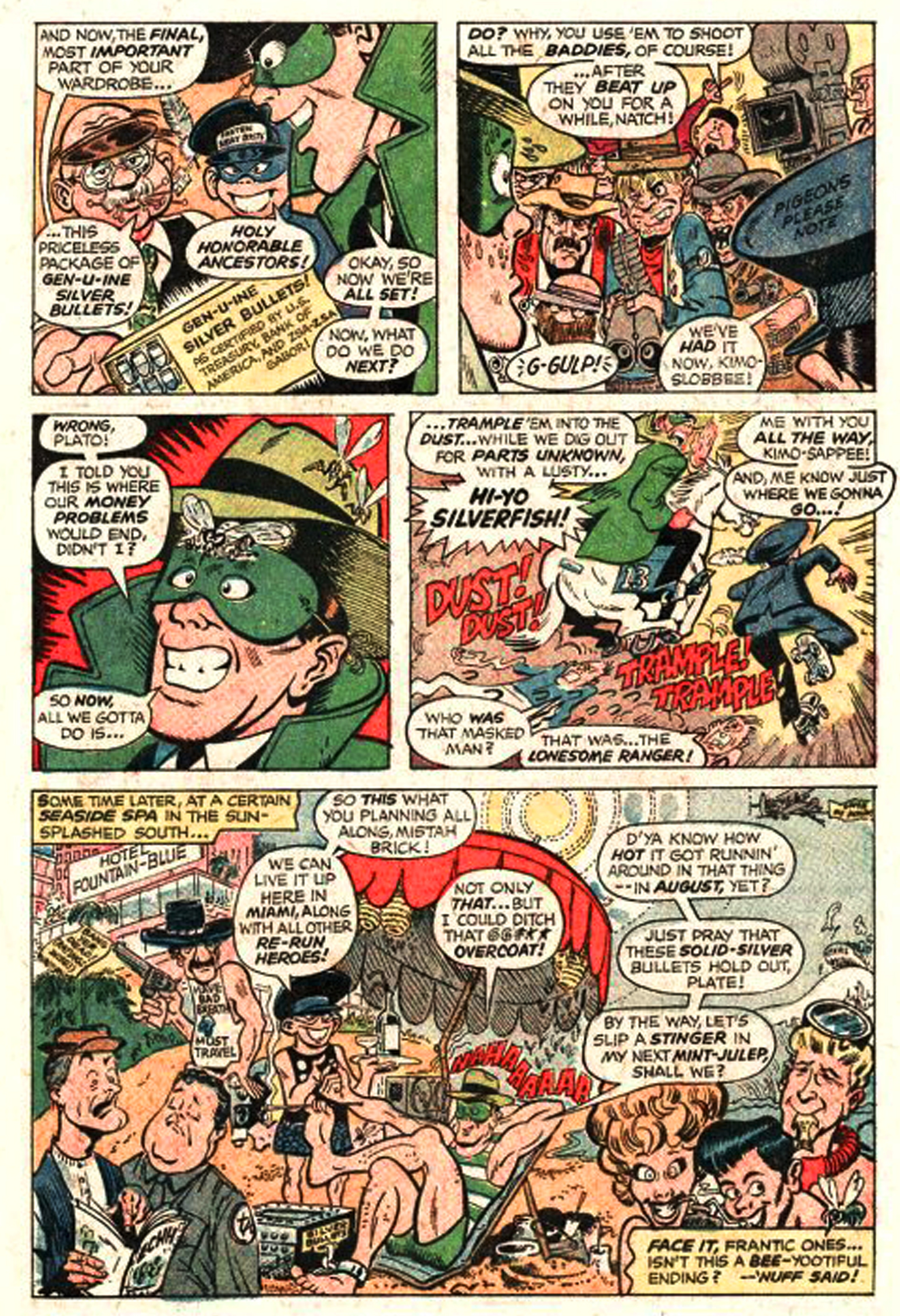 Hit and miss results, but two big cameos from the Peacock network helped to make the trip worthwhile.
Beneath Wayne Manor
Top

Unfortunately, I have a hard time turning down ANYTHING Batman from the 60s or 70s. I think I mainly wanted the Jerry Lewis issue because I enjoyed Oksner's work on the Super-titles and wanted to see his take on Batman.
Top

You may already be aware Victor Buono's "Fat Man's Prayer" is one track from an album that came out in the early 70s called "Heavy". I'm listening to other tracks as I write. It appears to be a live recording, which helps explain the audience' good humor. You've accurately characterized it as self deprecating and well written wordplay.

Tracked down a Cracked parody in Cracked 234 (March 1988), entitled "Battyman." It's written by Charles E Hall and Rick Altergott. Our Bat Parody reviewers should track it down for an upcoming parody podcast. I think it's better than Mad's classic take.

Interesting stuff, sirs. I liked the concept of the Jerry Lewis parody, although I thought the execution left a lot to be desired. I could picture even Stanley Ralph Ross rolling his eyes at some of the alleged jokes.

That said, the line about Newmar was very amusing. Too bad Catwoman was not in it.

I assume the opening panel with Jerry trapped in the bell clapper was an homage to Bookworm's deathtrap for Robin. As you said, it had nada to do with the actual story.

The third parody was the best, yes. Cutting off rock-and-rollers' long hair would be a very '66 Bat-crime.
'I thought Siren was perfect for Joan.'--Stanley Ralph Ross, writer of 'The Wail of the Siren'

'She had a devastating, hypnotic effect on all the men.'--A schoolmate describing Joan Collins at age 17
Top
Post Reply
7 posts • Page 1 of 1