TO THE BATPOLES #139: "Batman Meets Godzilla" #2 and the Battle Over the Batmobile

TO THE BATPOLES #139: "Batman Meets Godzilla" #2 and the Battle Over the Batmobile 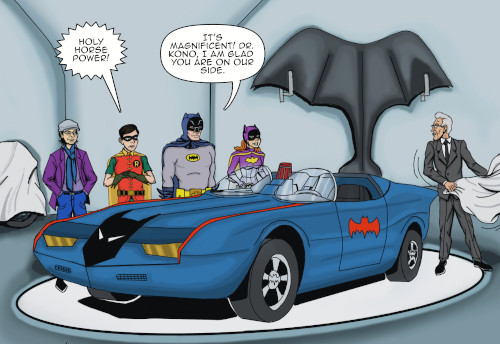 Batman Meets Godzilla issue 2 is out! You may recall we previously reviewed issue 1 of Eric Elliot’s labor-of-love project, with contributions from numerous artists (including Ian Miller, who drew the above panel), to bring life to a movie pitch from the ‘60s. Issue 2 manages to noticeably top issue 1 in numerous ways. In this episode, our review.

As 20th Century Fox and Greenway Productions were putting together the pilot two-parter of Batman, some problems arose with George Barris and his car customizing shop, Barris Kustom City. Barris seemed intent on keeping possession of the car when it wasn’t in front of the cameras; Fox’s Charles FitzSimons suspected that Barris wanted to hold the car for ransom. Some documents, from the American Heritage Center in Laramie via Ben Bentley, tell the story … or, at least, some of it. We examine these documents.

Also, a Holy Deja Vu (or two) from the Dick Van Dyke Show, a French-language record that’s both about and credited to Batman, and your mail about episode 136, “Freeze/Penguin teamup and Dozier’s ten rules”!

Tim, a 100 pound pachinko ball dropped on someone's head is more than enough to kill them. Think of those cases in the USA where someone drops a concrete block on a car from the highway. A pachinko ball of that size has greater mass and is more aerodynamic. Using some conservative figures, the impact force would have a peak value of 11.155 kN and an average of 5.578 kN. This is 11,155 N and 1 N (Newtons) is the force of normal gravity. This assumes Strange has made his machine of Teflon and prepared it to minimize friction and that the balls aren't substantially slowed down by a peg on their way down. Even a reduced impact force would do the job easily. Granted, this isn't as cool as Batman's belt communicator emitting enough decibels to destroy the universe and open black holes but Strange is after all a real scientist

I enjoyed both part 2 of the Batman/Godzilla treatment adaptation and your discussion of it. That said, I have two minor criticisms: 1--As Tim noted, the dialogue isn't '66ish enough. More '66 type dialogue, besides some obligatory 'holys' from Robin, would frame it in that era just a bit more. 2--They give Yvonne a shoutout, but the inker fails to make Batgirl's eyes green?? Come on. That's non-negotiable if you specifically are honoring Yvonne.

The Batmobile cat-and-mouse between Greenway and Barris was more fascinating than I even expected. Kudos to Ben for supplying the documents. Paul made a good point, though. Too bad we have no way of getting Barris' paperwork and a more complete look at his side of the tug of war.

I liked the memo about how Barris was about to 'spring a trap.' How did they know? Was the letter narrated by Desmond Doomsday and accompanied by Nelson Riddle's season 1 deathtrap cues?

As for Gaston Glass, maybe he was the brother of Jan Brady's boyfriend, George Glass.
'I thought Siren was perfect for Joan.'--Stanley Ralph Ross, writer of 'The Wail of the Siren'

I'm not sure you need Barris paperwork to get his side of the Batmobile matter, since the responses from Fitzsimons, et al., also serve as a view of what Barris was trying to pull. For all of his well-known ego, Barris really produced some shoddy work, if the car's ignition, the passenger door randomly opening and its other problems are any indicator. I've heard similar complaints about the construction of The Munsters' Koach and other cars he produced for TV. Brushing aside the decades' worth of Barris myths, one sees a very selfish, opportunistic man as opposed to his manufactured jokey, "King of Kustomizers" image & routine.

If Dozier, Fitzsimons and others thought they had it bad with Barris, their situation probably paled in comparison to his cut-throat swiping of credit for cars he did not design.

The following excerpt is from a profile of legendary car designer Tom Daniel and his relationship with Barris, from TwoMorrows Publishing 's Monster Mash: The Creepy, Kooky Monster Craze in America - 1957-1972:

Its clear that Barris turned to a fellow car customizer,Tom Daniel, to whip up a sketch, when, in 1964, Universal Studios gave Barris a crunch deadline to propose a design for the family car on their new sitcom, "The Munsters."

"All that Barris told me was the The Munsters TV show plot was a kind of comedy with spooky characters; how many Munster family members were to be featured in the TV show..."

"What sold the studio was my design sketch, which was done in a short amount of time."

He also drew the initial sketch for the Drag-u-la, and gave Grandpa Munster's dragster its name.

Two among Hollywood's most iconic cars..and Daniel did not receive deserved credit thanks to Barris, who had his brand not only riveted to the actual cars, but his image and name sold as the one and only designer of the Munster cars. It took before decades to pass before the truth was revealed:

"George did not like it one bit when that started to happen," Daniel said. "George called me at home, screaming on the phone about how his late wife, Shirley Barris, had designed the Munster Koach."

The reason I posted that excerpt is to continue painting the picture started by the Fitzsomons documents; over the years, this board's members have discussed the corrupt, credit-stealing actions of Bob Kane, but Barris might outdistance Kane in the Self Serving Olympics. Aside from the actions laid out in the documents, Barris is the same man who repeatedly claimed to been the one to think of all of the Batmobile's gadgets and functions. If I'm not misremembering, wasn't there a memo where someone from Greenway (Dozier?) wanted the Batmobile to be more like the gadget-heavy James Bond cars? If so, that pretty much says Barris was not the one who naturally conceived of the car's functions--essentially, he lied over the decades about how inventive he was regarding what Batmobile could do. As in the case of Tom Daniel, Barris took all of the credit (and benefits) from the work of others.

Of course, we know how little he said about Dean Jeffries while parading the Black Beauty and the Monkeemobile around for decades, so between the Fitzsimons documents, the Daniel account and his use of Jeffries' cars, the Legend of Barris should have crumbled to dust by now.
Beneath Wayne Manor
Top

Great episode. I came for the "VS Godzilla" review, but stayed for the Barris behind-the-scenes info. These deep dives are why I love this podcast so much.

I will only say, I had a laugh when Tim accused the Batman VS Godzilla fan-created comic of giving fan service to fans by including the Red Bamboo.

This is both the strength and weakness of any franchise crossover. You get that "Oh! I know what that is!" moment (which is fun) to the detriment of plot or story. But maybe no one actually reads crossovers for plots or stories. IDK! Just throwing that out there. Catch it if you dare...

Lord Death Man wrote: ↑Thu Aug 06, 2020 9:04 am Using some conservative figures, the impact force would have a peak value of 11.155 kN and an average of 5.578 kN. This is 11,155 N and 1 N (Newtons) is the force of normal gravity. This assumes Strange has made his machine of Teflon and prepared it to minimize friction and that the balls aren't substantially slowed down by a peg on their way down. Even a reduced impact force would do the job easily.

High C wrote: ↑Tue Aug 11, 2020 1:33 pm They give Yvonne a shoutout, but the inker fails to make Batgirl's eyes green?? Come on. That's non-negotiable if you specifically are honoring Yvonne.

[insert lame joke where Batgirl tells cartoonist that her eyes are up here.]


To expand on Batwinged Hornet's comments: at the risk of sounding overly negative about George Barris (god bless him), I don't really understand the hype around his contibution to the 1966 Batmobile. It's the Lincoln Futura. Painted black. With some bats on it.

Granted, it's got the gizmos and whatnot (which were, as we've heard, Semple and D'ohzier ideas). And somebody had to do all those customizations. And that was Barris, of course, and he did an excellent job. Possibly better than anyone else could have done it. But the basic design, the foundation of the car - the "bat ears" in the headlights, the great big fins in the back, the aviation-inspired bubble windshield - it's all already there in the Futura concept car.

It's still my favorite Batmobile, but I guess what I'm saying is that a little humility might have been appropriate when you're dealt such a good hand. But I guess humility doesn't pay the bills in Hollywood.

Barris had a great career and had his hands on some of the most iconic screen cars of all time. So I don't mean to be a meany about it. But... you know... It's the Futura...
- Boy Genius
Top
Post Reply
6 posts • Page 1 of 1