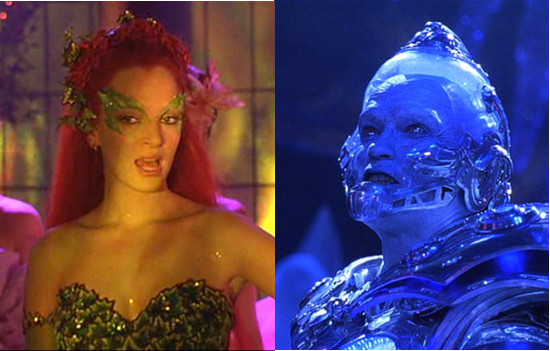 Batman and Robin (1997) is notorious as one of the worst Batman films, panned by both audiences and critics. But wait a minute. All four of the Tim Burton/Joel Schumacher Batman films have their problems. Doesn't B&R's story hold together relatively well? Isn't it kind of .... entertaining? Could it actually be the best of the four? Of course it's far from perfect, and we discuss some of its problems, including a pretty un-Batman-like Batman and a misguided "homage" to Batman '66. We discuss the bad and relatively good of the final '90s Batman film.

ALSO, Burt Ward reminisces about Bruce Lee, and we read your reaction to our episode on The Phantom Pharaoh!

I kind of figured, Tim, we would disagree on the efficacy of Uma Thurman's performance as Pamela Isley/Ivy. All that was missing was her cooing 'Oh, Battttttttttmannnnnnnnnnnnnnnn.'

Uma and Ivan Reitman must have liked it, at least the Pam Isley portion, for sure. In the 2006 film My Super Ex-Girlfriend, directed by Reitman, Thurman portrays her mousey (and I don't mean Susan Silo) alter ego of Jenny Johnson almost identically to Isley, and is made up and coiffed very similarly, too.
'I thought Siren was perfect for Joan.'--Stanley Ralph Ross, writer of 'The Wail of the Siren'

I hear too often this movie criticized by Batman fans who do not appreciate the 60’s show and it was refreshing to hear you two cite why a comparison between those two are hardly worth warranting.

Something that I appreciate about the initial series of Batman films was that there was a better character arc with our title character starting off as a dark vengeful character and eventually lighting up to except his protégés as his new family. It’s honestly gotten quite boring and for the last two and a half decades that we’ve been stuck with just the dark vengeful interpretation with the rebooted Nolan films up to what they’re doing now with the upcoming Robert Pattison movie.

Honestly, the only interesting aspect of Affleck Batman was that he had previously had a Robin, but I’m sure if Snyder had the chance to do a Batman & Robin film, he would’ve portrayed it like the very controversial Frank Miller All-Star Batman comics. Filmmakers really need to get past the collected works of Frank Miller and try to be inspired by other works.

The mentioning of the screenwriter, Akiva Goldman, made want to take note that Goldman is not good at all writing humor. The “What is Batman” speech was a clear example of what we could have had if they had kept that tone which doesn’t go well with the constant ice puns for Schwarzenegger. Apparently, the movie was originally conceived for Mr. Freeze to be much closer to his Animated Series counterpart. It’s a shame that they decided to go full-blown humor that’s more suited for The Joker or The Riddler. I’d like to hear further clarification on whose idea that was because apparently Schwarzenegger was very adamant about not wanting to play a villain so the humor was a compromise to make him less intimidating and closer to his screen persona. Schwarzenegger‘s presence in the first Terminator would’ve been appropriate for the role. I can imagine him doing the whole police station shootout scene but with his freezing gun which would be quite “chilling,” without him pointing out the obvious pun.

I hope one day there can be another attempt at trying to make a lighter and brighter Batman film closer in this vein of a Dick Sprang or Carmine Infantino comic, which the best of the 60’s show emulated.
Top

I had to stop your ambitious podcast examination of the terrible Batman and Robin movie to jump in with this bit of info on Jason Todd.

My understanding is he first appeared in Batman #357 and once he was became a significant character had a good relationship with Bruce/Batman all the way past issue #400 (and parallel issues of Detective Comics). Somehow this seems to be forgotten in the comics culture where people recall the snotty, abrasive Jason from Starlin's rather limited Batman run. Maybe the death and call-in were so shocking that it eclipsed the original much longer and more friendly, traditional mentor-apprentice team.

There's a rumor someone used an auto-dial device to skew the voting in favor of Jason's death.

I never made that connection to Batman Forever with the Bat-Visa card, good catch. Perhaps I was laughing too much at the badness onscreen. Actually, no perhaps about it, I was.

Over the decades, Batman has a few markers almost universally identified as destructive blows to the character; one would be the much of the late Golden early Silver Age Batman comics, for some, its part or the '66 series' second and most of its third season, still others point to Legends of the Superheroes and the Schumacher film discussed here. They would not be incorrect picking any of those productions, but for Batman and Robin--being a part of a continuing series to be such a cartoony, illogical, loud mess barely recognizable as a Batman film served a serious death blow to the image of the character in live action form.

Despite the desire and studio wrangling to find some way of bringing one of DC's flagship characters back to the big screen, the spectre of the gaudy garbage called Batman and Robin was a roadblock of sorts. Think of it: a genuine pop culture icon character recognized far beyond comic book readers took eight years--nearly another decade before a live action Batman would be seen again with Nolan's landmark Batman Begins.

Perhaps the idea needed distance from the Schumacher disaster--allowing it to not be so fresh a memory to audiences. That, and in between 1997 and 2005, other comic adaptations were released (e.g., Blade, two of the Raimi Spider-Man movies, the X-Men, and other, less successful entries), doing their best to be disassociated from the silly, cartoony stigma Schumacher's movie Crazy Glued to the idea of superhero films.

Whatever the case, the legacy of Batman and Robin is that it killed the first Batman film franchise, and arguably damaged the perception of the character as much as some claim season 3 of the '66 series did 29 years earlier.

Like walking on a sidewalk and seeing a pile of dog waste on the sidewalk, you don't stop to consider anything about it. You run past it, holding your breath until you are blocks away. You don't look back or inhale. The same rule should apply to Batman and Robin!
Beneath Wayne Manor
Top

Harsh but accurate. This is a terrible movie. I give the guys credit for examining it with open minds but it's garbage. Not straight enough to be campy, (!) garish yet somehow darkly lit, villains whose natural baseline is antagonistic working together ("Mother Nature" "Freeze everything!) BAAAAAANE, everything rushes along yet remains boring.

Alfred making his niece a Batgirl costume hits a sour note, Clooney, like Affleck, seems miscast (except for his touching scene with Alfred, him and Hingle remain consistently impressive considering how little they are in these, particularly Hingle) and for a movie called Batman AND Robin, not only does Dick more resemble Nightwing but their antagonism is annoying before Ivy makes the scene and nearly intolerable after.

Taking an attractive woman like Uma and making her into some overly-made up sorta drag queen is just one of the innumerable offenses in this movie. That she still somehow manages to offer some element of the femme fatale through the bad writing, direction and aesthetic is a testament both to her beuaty and acting skill. Less is more wasn't in the mission statement apparently.

I don't know if I like anything Goldsman has written but this is by far the worst thing his name is attached to.......Wow, I just checked his wikipedia page and he's written all sorts of awful movies including the Dark Tower. This still may be his worst, in my opinion.

Even the largely bad third season of Batman is better than this; having B and R suddenly have Bat-Ice Skates is something the series might have done but their execution would've worked better within the context built up within the '66 series.

Like the awful color scheme, the Schumacher movies are too much of everything mixed in a blender and dumped on the audience.
Top

Listening to this episode brought back a repressed memory of mine - a friend and I were walking past the Toronto Planet Hollywood just before this movie came out, and we saw they were having their grand opening that day so we went in. We were told that Arnold would be making a special appearance so we waited maybe 2 hours until he arrived. They weren't actually serving food that day so we walked around looking at the collection of Canadian movie memorabilia. For the last half hour or so, every screen and speaker in the building was blasting the Batman & Robin trailer on a loop but we somehow stuck it out. Arnold eventually walked out into the crowd but the room was packed shoulder to shoulder so we couldn't see him until he got on a platform. He gave a little speech, added "Toronto - I'll be back" and left. What a day.
Top

Oy vey! The final Schumacher 'Batman' without a single camping trip? Not even a quick weekend down by the river? Don't leave me hanging with all these frankfurters, Paul! The bat-buns are going stale.

Does Dan E Kool enjoy 1997's Batman and Robin? (asked by literally no one)
Yes, of course he does! But probably only ironically.

Does that make it camp?
In the strictest definition of camp... yeah, maybe? I guess?

Paul's statement that the production values in B&R are too high to qualify as "real" high camp is thought provoking.

Nevertheless, I disagree. Because what fun would it be if I didn't?

Is the execution of B&R not over-the-top enough? Was our good director Joel S. not naive enough? In what way does the budget of the film detract from its campyness?

That's a serious question and I'm dying to know the answer.

On our scale of naive camp >> campING, Batman and Robin must be graded closer to the left than the right. This is one of the greatest examples ever of style over substance caught on film. And I don't think for a minute that Schumacher realized that what he was creating was so far off the mark.

Which is more than enough reason to love it.
- Boy Genius
Top

robinboyblunderer wrote: ↑Sat Aug 21, 2021 1:53 am There's a rumor someone used an auto-dial device to skew the voting in favor of Jason's death.

That is a really interesting tidbit. The kind of thing that gets glossed over in a general-interest publication: "Batman fans in the '80s wanted Robin dead!!!" I'd be really interested in knowing if there's proof that it's not true.
"I'm half-demented with whimsical outrage!"
-- The Joker, in a line cut from "The Joker's Epitaph"
Top

robinboyblunderer wrote: ↑Sat Aug 21, 2021 1:53 am There's a rumor someone used an auto-dial device to skew the voting in favor of Jason's death.

That is a really interesting tidbit. The kind of thing that gets glossed over in a general-interest publication: "Batman fans in the '80s wanted Robin dead!!!" I'd be really interested in knowing if there's proof that it's not true.

I don't know if there's actual proof of it. Just saw this interesting article with the comics teams who worked on Batman back then: