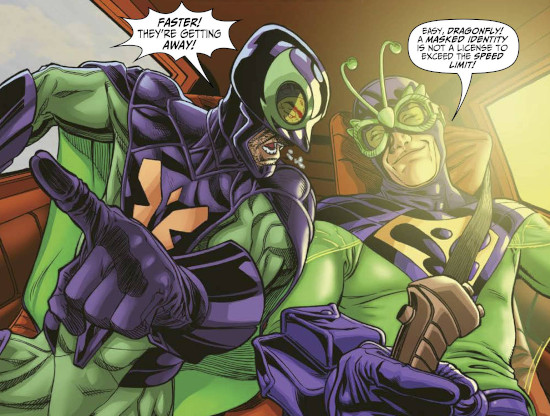 The Wrong Earth, written by Tom Peyer, is a comics series in which the super-square Dragonflyman and grim & gritty Dragonfly find themselves on each other’s versions of earth. In the second volume, recently concluded, the two meet each other on yet another earth.

Peyer, editor-in-chief at Ahoy Comics, is an industry veteran with many writing credits under his belt, including for the Batman ’66 comics series. This time, Tom joins us to discuss our favorite show and what The Wrong Earth might tell us about it.

Listen Here
"I'm half-demented with whimsical outrage!"
-- The Joker, in a line cut from "The Joker's Epitaph"
Top

Very fine interview fellas; and thanks for asking my question.

This podcast was my introduction to Dragonflyman, but I'm hooked. A great idea, well executed.
- Boy Genius
Top

Interesting interview, guys. The idea of two versions of the same character meeting and/or misunderstanding the other reminded me of one-panel MAD magazine parodies where this kind of meeting led to one character insulting the other.

For someone in the comic business, Peyer did go down a head-scratching road with one belief:

"..the Batman TV show in the 60s in particular was a VERY honest portrayal of what comic books were at the time.."

It never fails to annoy me when those who would or should know comic book history insist on claiming superhero comics published at the time the '66 Batman were like the show, when that was not really the case at all. One, if i'm not mistaken, contributors of that era's Batmania fanzine criticized the '66 series for its deviation from the comic, and speaking of the comics, the letters pages of various DC titles printed a number of letters that were less than kind to the '66 show compared to the comics (some I posted in older board threads).

At the same time the Dozier series was first-run, The Amazing Spider-Man featured such non-Dozier subjects such as Norman Osborn's psychologically abusive relationship with his son (Harry), while Captain America continued a long run of plots where he suffered from PTSD due to WW2, Bucky's death, and the rise of new fascist terrorist groups. The Fantastic Four dealt with questions about man's place in the universe, and the same year the TV series was cancelled, the Doom Patrol allowed themselves to die in an explosion (set by the Brotherhood of Evil) as a trade to save the lives of a village. In the Batman comic, a criminal (The Planner, who dressed as Batman to frame him) is allowed to die in the electric chair, still wearing the Batman costume.

That's just scratching the surface of how radically different many of the top superhero comics of the era were from the Dozier series. Comics were undergoing a steady growth period in the mid - late 60s, and appealing to college age readers who were not going to increase sales and pop cultural expansion with Marsha Queen of Diamonds, King Tut having one of his endless hissy fits, man-eating clams, Bat-Fly swatters, wind-up mice or the Minstrel.

The '66 series was--more often than not--the outlier in how superheroes were portrayed.
Beneath Wayne Manor
Top

When Tom said this, I assumed he was talking about DC comics c.1966, not Marvel (though of course he didn’t say so explicitly). Gardner Fox’s JLA stories were great fun, for example, but goofy as anything, logically challenged, and the characters? Flat as pancakes. When Tim and I read New Look Batman stories up through the end of the 1960s, I saw little to change that perception of DC’s stories. It wasn’t until Frank Robbins and Denny O’Neil got Batman out of the Batcave (BATMAN #217, 1969) that Batman stories in the comics began to approach the level of relative sophistication of the Marvel books of a few years earlier. But maybe I’m missing something.
Top

Many thanks to Mr. Peyer for giving insight into his writing process. That's always interesting to me. I found it notable that he wanted to do a Black Widow story. I was hoping maybe he had an unused idea for another underutilized '66 (well, '67) villainess, but that's how it goes.

P “Junior Batman” Y wrote: ↑Thu Sep 23, 2021 5:27 pm When Tom said this, I assumed he was talking about DC comics c.1966, not Marvel (though of course he didn’t say so explicitly). Gardner Fox’s JLA stories were great fun, for example, but goofy as anything, logically challenged, and the characters? Flat as pancakes. When Tim and I read New Look Batman stories up through the end of the 1960s, I saw little to change that perception of DC’s stories. It wasn’t until Frank Robbins and Denny O’Neil got Batman out of the Batcave (BATMAN #217, 1969) that Batman stories in the comics began to approach the level of relative sophistication of the Marvel books of a few years earlier. But maybe I’m missing something.

Actually, he did say, "...honest portrayal of what comic books were at the time..." meaning comics in general, so that would include Marvel, and other publishers. However, I did mention titles like the Doom Patrol, which was never a light book, while one can also look to Strange Adventures a title that usually featured fantasy on the less-than-happy side, and it introduced the very dark Deadman only a month after Batman's third season premiered. Of course, DC's war titles always leaned heavily into the darker themes, but the point is that one cannot possibly suggest the '66 series mirrored comics in the blanketing way Peyer did in the interview.
Beneath Wayne Manor
Top

I still find his statement to be accurate?

Batman stories of the time served as undeniable inspiration for many of the episodes..?

Zelda the Great was lifted straight from the pages of Detective Comics 346...

But I know you know that. So I guess I'm wondering if you can clarify what the difference is?

Season 1 in particular has some of the most literal live-action recreations of comic book pages ever put to film, imo. Interviews with Semple show that that was his and Dozier's intention - and that they felt the humor of seeing a comic book acted out seriously was the source of its humor.

I would agree that later '66 stories deviated from the comics by injecting more intentional humor and gags. But certainly the first 32 episodes were true to the source material?
- Boy Genius
Top

"..the Batman TV show in the 60s in particular was a VERY honest portrayal of what comic books were at the time.."

He was generalizing about all comic books--not just Batman, and considering the titles and characters I referenced which were published while the '66 series aired on ABC, his statement was extremely incorrect. You mentioned the comics adapted by the TV series, but that did not mean the '66 series was the "honest portrayal of what comic books were at the time.." as categorized by Peyer.

Again, I also cite the letters pages of Bat-comics of the period; the fans sending letters were "in the moment"-- seeing it all happen in real time as readers and TV series viewers, and their pointed complaints about not wanting to see TV-style elements in the comics meant to this group of readers, the TV style was the outlier--something they considered alien to the general tone of the comics, which supports the observation about Peyer mischaracterizing that era of comics.
Beneath Wayne Manor
Top

Hmm, I didn't hear it that way. I thought he was talking about Batman comics specifically, and not including contemporary Marvel comics of the 60s.

But to take your side for a bit, I do think it's fair to say that Batman comic books of 65-66 weren't meant to be read as fascicle. To the degree that the show purposefully presented the stories as humor, I think we can agree that you're correct - - if the '66 Batman series were 100% honest in its portrayal, even the most direct comic-to-screen adaptations by Semple wouldn't have included winks and nods to the audience as they had. In other words, the show wouldn't have tried to get any laughs at all. Which, of course, it very much did.

In that sense, Peyer's quoted comment is incorrect. It's not an honest portrayal because, though it is often a literal adaptation, it's done in a subversive tone that purposefully goes against the original intention of the comic.

But on the other hand, many of the comments from contemporary Bat comic books that you mentioned were also calling for Batman to return to his "darker roots" from decades earlier, which does suggest that readers of the time felt that Batman had become lighter in the 60s, not just on screen but in the comic pages as well. And that supports Peyer's opinion that 66 Batman the show was closer in tone to the comics of its time.