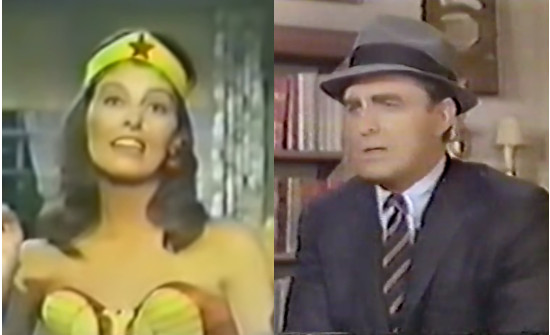 In 1966, William Dozier’s Greenway Productions was riding high, seemingly on the verge of building a TV empire built on superheroes: first Batman, then the Green Hornet. Why not keep going in that direction? An entire pilot episode of Dick Tracy was made, starring Ray MacDonnell, and all signs point to Dozier having confidence that the show would be bought by NBC - but it wasn’t. Meanwhile, Greenway also made a test film for Wonder Woman, starring Ellie Wood Walker, with a script that would have been more more appropriate for a MAD parody.
While Dozier’s Wonder Woman experiment was NOT a success, the question lingers: Why wasn’t Dick Tracy picked up? We suggest some answers in this episode.
Also, we go down to the Bat Research Lab to try to figure out what Lorenzo Semple Jr’s Mr. Zero idea was all about; Burt Ward talks about “holys” and ad libs, and we read your mail about our “Mr. Freeze(s)” episode.

Listen here, and find many reference links
"I'm half-demented with whimsical outrage!"
-- The Joker, in a line cut from "The Joker's Epitaph"
Top

The Lon Chaney Jr. as Pruneface is highly likely to be non-associated with Dozier’s Dick Tracy pilot. Pictured below is a photo that features John Chambers with his makeup creations for not only Pruneface, but The Brow, Flattop and Mumbles, all in the style of the early 60’s UPA animated series and not Gould’s original artwork.

The format document you shared and the scripts/story treatments that were available didn’t mention them. It was interesting that you both theorized that they wanted this to not conflict with the comic strip, which may have been a request from Chester Gould. He apparently wanted more input on his characters’ translation to other mediums in his later years, which was a factor into why the eventual Dick Tracy movie got made after his death. The villains Gargles and Needles mentioned in the format were actually Chester Gould creations that appeared in the 40’s, so there may have been an option to have older and deceased villains from the strip appear in the show if it had been picked up.

As for the origin of the picture, this could have been for the NBC pilot that apparently was being developed before Dozier’s turn and the Dick Tracy soaky in the center of the table gives the impression that this may have been for an advertisement but it seems unlikely that such high production values would be utilized for a commercial. Bill Mumy did a number of Dick Tracy merchandise (namely toy guns) commercials but never got a chance to face down real villains from the comic strip.

I appreciate your take on why Dick Tracy seems to only work within the confines of his comic strip. He’s too square of a character to be portrayed in a live action setting and would risk itself from becoming a parody of the source material as you mentioned how Dragnet is viewed with today’s senses. It would be great to see something on the scale of Beatty’s film but even that was faulty when compared to the source material. Doing something dark and gritty like the recent HBO Perry Mason series would go against the black and white morality Chester Gould portrayed.

I believe a Dick Tracy musical was at one point in development long before the 1990 movie came out. One of the complete Dick Tracy comic strips books talked about it.
Top

Re the pathetic Wonder Woman short: Not surprising that Dozier didn't have his finger on the pulse of women's abilities, rights, expectations, etc. and that he couldn't 'read the room,' as it were. I mean, yes, Honey West had been canceled, but The Avengers was airing on ABC at the time. Plus, The Mod Squad, with Peggy Lipton as one of the leads, was warming up in the bullpen. I could go on, but the less time spent, the better. As you said, the Mad magazine influence is obvious and does not work.

Again, the fact that even Stanley Ralph Ross, of all people, had a treatment with Batgirl delivering a judo chop, shows how out of step Dozier and Horwitz were compared to the world at large.

As for the more worthy Dick Tracy pilot: As you guys said, the casting was fine. Ray MacDonnell was more than adequate and the supporting cast is good, too, for what they are given to do. I've seen Davison--not seen here--in other stuff and she was solid.

I think the problem is in the premise, and it ran into a couple of problems Batman had. Much like with the original concept for False-Face, makeup costs would be prohibitive to bring Tracy's own actual rogues gallery to live action. But without them, and that obviously seemed to be the plan, you lose the flavor of Dick Tracy. Remember, one of the knocks on Batman, especially the front half of season 2, was that there were too many made-for-TV creations and not enough of the Big 4 villains. The audience didn't like the newbies.

I could see a similar problem here. There is an expectation with Dick Tracy that you are getting those classic villains that are part of his universe. Without them, he's kind of a high-tech Joe Friday.

***
As for the bizarre Mr. Zero test scene, it reminds me of a later TV movie that was inspired by this novel, which, lo and behold, was published in 1962 (things that make you go hmmmm):

I guess the Zero would be a hero (yuk-yuk, paging Stanley Ralph), but where are they going with it? So he freezes the baddies, figures out their plans, and then thwarts them. And that will be interesting for about, I dunno, two episodes? If that many?
'I thought Siren was perfect for Joan.'--Stanley Ralph Ross, writer of 'The Wail of the Siren'

High C wrote: ↑Tue Oct 05, 2021 4:27 am I think the problem is in the premise, and it ran into a couple of problems Batman had. Much like with the original concept for False-Face, makeup costs would be prohibitive to bring Tracy's own actual rogues gallery to live action. But without them, and that obviously seemed to be the plan, you lose the flavor of Dick Tracy. Remember, one of the knocks on Batman, especially the front half of season 2, was that there were too many made-for-TV creations and not enough of the Big 4 villains. The audience didn't like the newbies.

I think the inherent problem with the Dozier office in regards to made-for-TV creations is that their writers were not comic book writers and the production team didn't even understand comics, comic readers and what made a lasting comic villain character work in the first place. Thus, the newbie villains came across like knockoffs or sketch comedy caricatures much like the one Milton Berle did. Especially Season Three, baby. Groovy!

Scott Sebring wrote: ↑Tue Oct 05, 2021 8:20 am
I think the inherent problem with the Dozier office in regards to made-for-TV creations is that their writers were not comic book writers and the production team didn't even understand comics, comic readers and what made a lasting comic villain character work in the first place.

That's interesting. Yeah, I can totally see that. The stories that worked best leaned most heavily on the source material. The campiness (in the case of Batman) came from the writers not fully grasping what they were doing. The further that the writer deviated from the source, (let's use Semple and the 66 Movie as an example) the less it worked. Because the anchor of the comic book source was no longer there to ground Batman in his natural habitat... the pages of a comic book.

Another winner, guys. You were wondering how films like the Wonder Woman short were used, and you were on the right track by theorizing that it was aired for the networks. Even very successful producers still needed to go the "proof of concept" route when trying to get a new series greenlit, as in Irwin Allen's case, when he produced short pitch films for The Time Tunnel, Land of the Giants and City Beneath the Sea. As we know, Tunnel and Giants became series, but City did not, leading Allen to produce as a TV movie (for NBC) in 1971.

I'm almost sure you're aware of it, but The Green Hornet also had a "test film" with two notable casting difference: Jan Murray was the Hornet, and Richard O'Brien had the Mike Axford role instead of Lloyd Gough--

Needless to say, Greenway was wise to sign Van Williams and Lloyd Gough. Jan Murray lacked any sort of charisma and while I understand that the distinctive first Hornet mask was not available at the time this was shot, I doubt it would have helped Murray's attempt to be TGH. Of note is noted actor / director / acting instructor Jeff Corey appearing as a villain.

About Dick Tracy...even if it made it to series, I seriously doubt it would have lasted a season, if the pilot is any indicator of how it would have been produced. MacDonell was just so bland in the role, which--contrary to the opinion of some--was not how Tracy was written in the comic strip. Yes, he was very forthright, but not a piece of wood laying on the sidewalk, which is the impression MacDonnell's performance gave me.

About writers Stan Hart and Larry Siegel, I REALLY disagree with the criticisms about their contribution to MAD; I would strongly suggest Seigel played a major role in building the MAD that became the most famous satire magazine of the 60s and arguably part of the 70s (yes, more than often overrated National Lampoon).

Being "pessimistic" (among other things) was the point of MAD at the height of its creative / pop cultural powers, where digging into & exposing the parts of humanity others pretended did not exist (for some, based on their Ozzie and Harriet-ized sensibilities) was the joke. It was not limited to Hart and Siegel; if you read Berg's The Lighter Side of... feature over the course of say, 20 years, you would find stinging commentary about everyday life, along with the usual "Roger Kaputnik" material.
Beneath Wayne Manor
Top

That Tracy villain pic is incredible. I’d seen the Pruneface and Flattop makeup test pics before, but never that one. And in color! Wow.
http://wrestlingmemorabilia.blogspot.com/
Top

The make-up in that photo looks very impressive.

I could see the Wonder Woman pilot as a segment on Love American Style. "Love and the Wonder Woman". A final scene added meeting up with Steve Trevor.
Top
Post Reply
10 posts • Page 1 of 1