Here's one up at 13th Dimension that you may dig:

I really wish I had the opportunity to see this in person. I’ll just have to enjoy it here through the generous board members that have shared the links and pics. it sucks being so far away.
Top

You can't get much further away from it than Sydney, but against numerous odds, I got there!

It was so worth it! 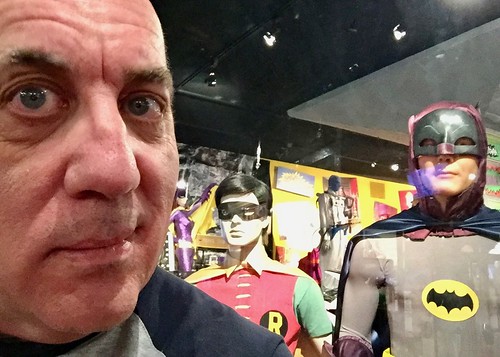 I wonder what the odds are of it getting extended any further. If it gets into March, I might have a chance to go. Paul has gone, and we'll be discussing in a future TO THE BATPOLES episode.

I recall from the BATCAVE podcast last winter that there was said to be no chance of the exhibit traveling, because the materials in the exhibit are owned by so many different people local to L.A. As the thing appears to be wildly popular, are there any rumors of reconsidering and taking it on the road?
Top

On Wally's Facebook page, he discussed the new King Tut dressed statue (with a face created by the Victor Buono life cast found in the "Planet of the Apes" display) is one of the additions that will become a permanent exhibit at The Hollywood Museum. There will also be a new permanent(?) exhibit celebrating 60s' TV Batman, Robin, Batgirl, 70s' TV Wonder Woman and Christopher Reeve's Superman. 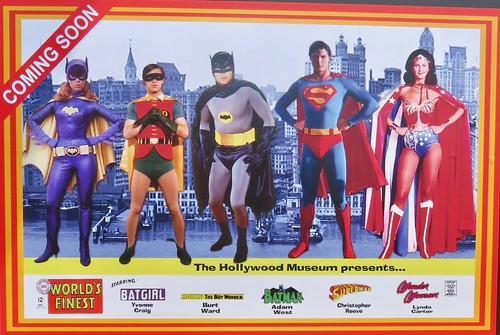 Wally Wingert says: "Coming to The Hollywood Museum... 'The World's Finest Five' exhibit! It's a fan-fantasy-inspired exhibit featuring our favorite super-actors assembled together in a 'what if' scenario. This is the cast we've always wanted to see together! Stay tuned for more."

The Museum already has a Reeve "Superman: The Movie" costume on display, but the mannequin doesn't look like him (yet). 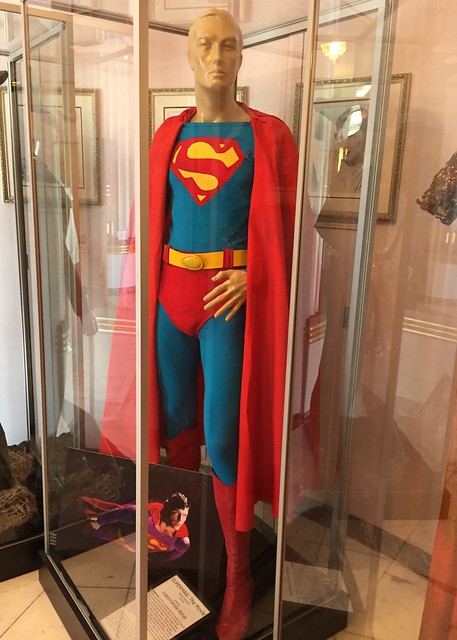 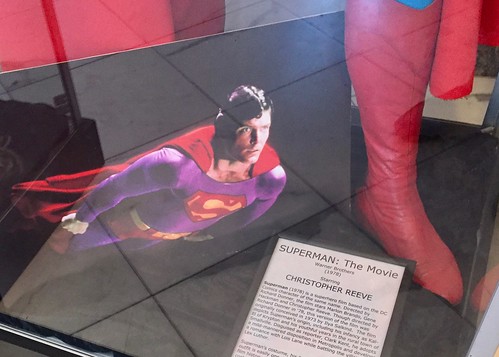 OK, so it sounds like there would be SOMETHING there to see no matter when I go.... Thx
Top

Sad to be missing this new event! 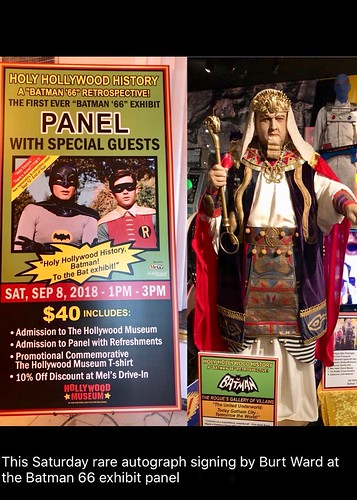 King Tut at the Hollywood Museum by Ian McLean, on Flickr

At least King Tut will be part of the permanent Museum Collection.
"Holy nostalgia, Batman!"
Therin of Andor

I'm also so sad to miss this, darn it

,but I wanna thank Wally and everyone, who put together this amazing exhibit for everyone to see,someday ill get to see a version of it

I was just in Hollywood and went to the Museum for the second time. I didn't know about the addition of Tut, but it is very impressive.

A number of items have been removed from the display, probably due to the fact that they didn't expect it to run this long. It's still worth seeing, but I'm glad I was able to go back in January.

Hey there, does anyone know if the Hollywood museum exhibit is still running? Wally? Thanks!!
Top

From their web site, it appears not. It's become what they promised a while back, a museum of the costumes and likenesses of the Terrific Trio and several other '60s-'70s live-action superheroes.

bat-rss wrote: ↑
Mon Mar 18, 2019 5:34 pm
It's become what they promised a while back, a museum of the costumes and likenesses of the Terrific Trio and several other '60s-'70s live-action superheroes.

Correct. King Tut was a late addition to last year's exhibition, and now a permanent display item, since the face was made from the Museum's own life cast of Victor Buono. Plus they have a new Reeve Superman mannequin wearing the uniform that was already on display, and the West/Ward/Craig mannequins from the "Batman '66" exhibit, a new Lynda Carter mannequin - and display items from Lindsay Wagner.
"Holy nostalgia, Batman!"
Therin of Andor

I finished my LA trip yesterday with a visit to the Hollywood museum, and the Batman '66 exhibit is still up and running. I have to say that as I was walking up the steps to the third floor and rounded the corner, the glimpse across the doorway to the exhibit took my breath away. Thanks, Wally, for putting it all together. It was a highlight of my weekend in LA alongside finding the Batcave at Bronson Canyon.
BAT 77 - My '70s Batman Childhood
Subscribe to the Podcast at http://bat77.libsyn.com
Visit me on Facebook.com/bat77podcast
Top
Post Reply
13 posts • Page 1 of 1