Another proud owner of the classic batman Lego Batcave here

Szabol wrote:Just ordered: Inspired by the 1960's T.V. Batman series. This hand crafted beauty is 1-9 scale and stand nearly 7 3/4 inches high. The Bat computer has working L.E.D.s and is powered by a 9v battery with an on off switch.

image.jpeg
Perfect for that FTC Alfred with Apron to clean.

Love this piece! I'm waiting for the 1/6 version to go with my HT figures and my 1/6 Bat Signal.
Top

Love that Burry sign Ralph-- that is a tough get!
Congratulations!
Artist-Writer
http://WWW.ANDYTFISH.COM
Top

I was absolutely blown away back in December when hannibal8 posted pics of his SPECTACULAR Catwoman paint-up, and I just received my copy of the kit yesterday. I am VERY pleased with the quality of both the sculpt AND the castings, so I thought I would shoot a few pics for folks that maybe are not as familiar with garage kits and what they should expect.

Head is molded separately from the body to make painting easier, I just placed it on there for the photos. In the third photo you can see the slightly offset seamline (this side is actually the WORSE of the two sides, which speaks for the quality of the castings!) I will most likely try and match the texture after sanding by applying either "Snowtex" craft paint or acrylic modeling paste with a stippling technique using a stencil brush. Anyway, thanks again to David for inspiring this purchase, if these pics inspire anyone else, I believe there is one up on eBay right now, or feel free to PM me for more info!

Just received my autographed copy of "Bat Bad Girls" by Renato D'Angelo. For those who haven't seen it, it's a captioned scrapbook of "Batman '66" series (and movie) villainesses and henchwomen. Nice work Renato. Thank you! Dr Cassandra found pics of her dress, but not of herself. 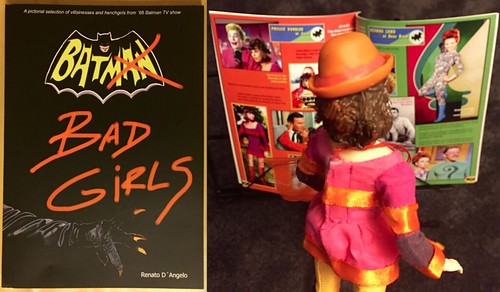 Got this today. Goes well with my Contaminated Cowl bobble head.

Ralph, is that the one American Pickers grabbed a couple of episodes ago?
Top

PDpuck16 wrote:Ralph, is that the one American Pickers grabbed a couple of episodes ago?

I was wondering that also.
Top

I'm actually planning on painting the "removable cowl" (from the next Batman) bright pink so that my Mad Hatter can hold it! I missed getting Alter Ego Bruce a few waves ago, but recently weakened on a Dick Grayson I found in a store, so I'm planning that a Bruce in Batman outfit would look good standing beside him. 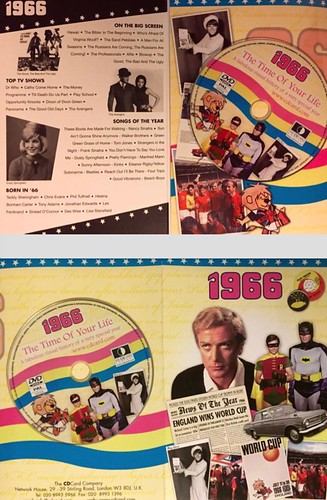 Above: A 1966 CD gift card I bought today. Celebrating 50 years, hence the Batman and Robin photo. The CD is mainly b/w British newsreel footage (60 mins, some garish colour) and, as warned by the fine print on the card, there is no actual Batman movie or TV series featured on the CD. Nice card, though!
"Holy nostalgia, Batman!"
Therin of Andor

Got this today-- one of my favorite covers classic Dick Sprang work!
Artist-Writer
http://WWW.ANDYTFISH.COM
Top

I bought the replica Utility Belt about 8 months ago. However I just mounted it in a shadow box for display in my home office/studio.
I want to put a Batman TV Show style Label on it that says "In Case Of Emergency Break Glass"

I just purchased one of the Modern Batman Premium Format Statues by Sideshow Collectibles! It's 25" tall and is absolutely AWESOME!!! I placed a deck of playing cards next to it to show the scale.

Here's another shot of it standing on top of my case with the Batman & Robin Tweeterhead Statues below it.

The Early Bird may get the Worm, but it's the SECOND Mouse that gets the CHEESE!
Top
Post Reply
2152 posts