Apparently there are two versions of this out there because the one I have is a plain notebook, which fits my needs better since I already have a 2017 planner.
Artist-Writer
http://WWW.ANDYTFISH.COM
Top

"Someone might be able to substitute for Batman, for a very short time, but no one could ever replace him!"
Top

I've just purchased Batman: the Movie (on Blu Ray), Return to the Batcave and Holy Batmania - so it's going to be a Bat Weekend. Holy Mainline!

Looking forward to seeing the film again - last watched it about ten years ago. Looking forward to pondering who the better Catwoman is: Newmar or Meriwether... I'm just getting back into the show right now, as we speak.

Return to the Batcave looks pretty daft and I'm a real nerd for behind the scenes bits and bobs so hopefully Return and Batmania will satiate me in some way or fashion.
Top

Anyone interested in a planner like Ben has, or a Cesar Romero Joker one-- Moleskin is having a 15% off sale making the Batman one $21 and the Joker one $18 and free shipping this weekend on orders of $35 or more.

My partner Jess had pre-ordered me the "Surfs Up" Pop way back in July around my birthday, it took nearly three months to arrive in the UK and another couple for me to take it out of the box, haha.

Most Excellent, Ben! Which POP is next to the "Sur's Up" figure?


Happy and Safe New Year to You and Yours!
Larry
Top

Larry A. wrote:Most Excellent, Ben! Which POP is next to the "Surf's Up" figure?


Happy and Safe New Year to You and Yours!

To you too, Larry!

The Pop to the right is just the original version of their 66 TV Batman figure.
http://66batblog.tumblr.com
http://benbentleyphoto.com
Top 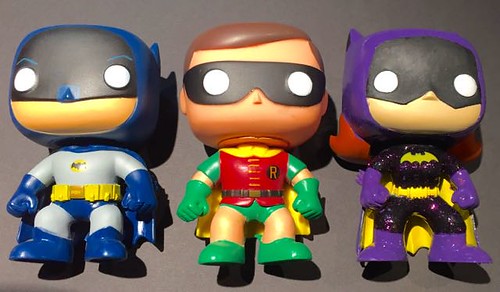 I got impatient waiting for a TV Batgirl. Sold as a "Black Friday" special GameStop/EB Games exclusive, the base figure for my customized Batgirl had an already-yellow cape made repainting (only the back) much easier. Purple "glitter glue" over the black uniform and purple paint on the cowl, back of cape, gloves and boots.
"Holy nostalgia, Batman!"
Therin of Andor

Happy New Year Ian. I simply MUST get myself a POP Bat Girl and do a repaint.

Larry; if you have a "Michaels" craft store close to you, they carry the POPs for around $12, but they ALWAYS have a coupon for 40 to 50% off in the weekly ad. Local store never got the '66 figures but they DID get some DC figures and I'm pretty sure I've seen Batgirl in the mix.
Tom
Top

I did a slight repaint on Robin. I didn't like the flat yellow of his cape so I gave it a metallic do-over:

Saw these, buy one get two free at fye, couldn't pass it up.

The Batker wrote:Saw these, buy one get two free at fye, couldn't pass it up.

That's an awesome deal! I have the Batman but i'd love the Robin, Joker and Batgirl if they were on a great deal like that!
http://66batblog.tumblr.com
http://benbentleyphoto.com
Top

My brother got this watch for me for Christmas (although it just arrived last week).

Just picked up the Matty Cowl and Belt from Walmart thanks to seeing a post about it here. Thanks!!
Top
Post Reply
2204 posts