I recently picked up this Batman Christmas Shirt.

I've had this one for a while. It features Rich Buckler artwork from the old Peter Pan/Power Records DC Christmas album.

Where did you find those, if you don't mind me asking?

I could've sworn that Power Records one was Neal Adams. Well done, Rich, wherever you are (and RIP).

I got the top one last Christmas. Its from a 1940's cover IIRC. The bottom is from the Christmas album, but not the book and record series.

They are collected from individual comics - I think the Batman story is from a Detective Comics issue.
Some days you just can't get rid of a ... SHARK!
Top

I got both shirts, at different times, from third party sellers on Amazon. I thought that Christmas album cover was by Adams, too. I read somewhere (the Power Records blog, maybe?) that Buckler was the artist. On closer examination, I thought Superman did look a little "stockier" than Adams normally drew his characters. I read that Buckler also drew the Wonder Woman book and Record set. I thought it was Adams too. It is really beautifully drawn if you get a chance to see it.

Oh, the audio for the stories on that Christmas album are available around the net, but I didn't post the links because I thought that might violate the copyright. One of the reasons I immediately picked up that shirt was I have the album. Really, even thought I don't currently own a vinyl player, I saved all my old Power Records albums for the beautiful cover art.
Top

Batman, Superman, and Wonder Woman smiling and wearing awesome costumes? DC upper management is going to have a fit if they see this! Still, those sweaters are fantastic. I'm tempted to look for them myself.

On another note, my latest purchase was a 7-inch wide plastic yellow oval Bat logo light. Looks great in the dark but doesn't actually have the illumination of any sort of lamp. It just looks cool.
"Hmmm... I don't like the twist this joke is taking. Let us away! Let us away!"
Top

I was going to say that Superman "S" is very, very "Adams," but on reflection it's also curiously flat given Superman's pectorals, so possibly it was just an Adams "S" pasted onto a Buckler figure. Anyway considering how much of a career Buckler made out of copying Neal's style, I shouldn't be too surprised if he got it really, really right in this image, especially if, as I suspect, he's inked here by Dick Giordano.

I don't know, though: the kids in the background -- which is a part of the image I'd never seen til this thread -- really, really look like "Neal" kids. (Someone once famously said, "Neal Adams draws people the way they would really look...if they looked that way." LOL)

BTW, one of the first comics I ever owned was Batman #239, featuring an Adams-drawn Batman in a Santa beard, so I'll always be a sucker for images like this. 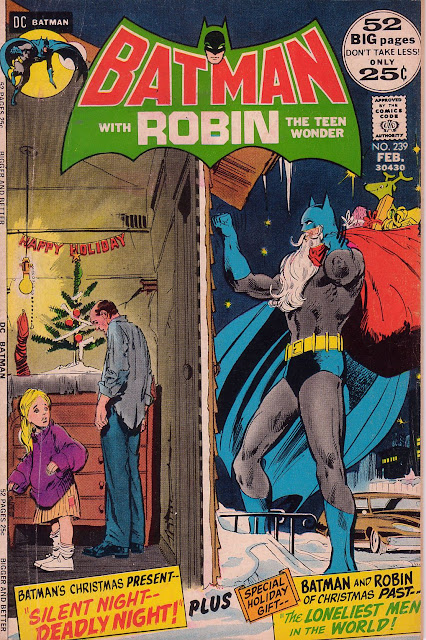 Maybe Superman's S is a metal chestplate? I'm just grasping at straws so...

Looking at that wonderful Batman #239 cover I'll say it again - DC would go into full blown conniptions if they had to put out something now that had any touch of or any sings of cheerfulness, hope, values, etc. What a pathetically sad company they are now.
"Hmmm... I don't like the twist this joke is taking. Let us away! Let us away!"
Top 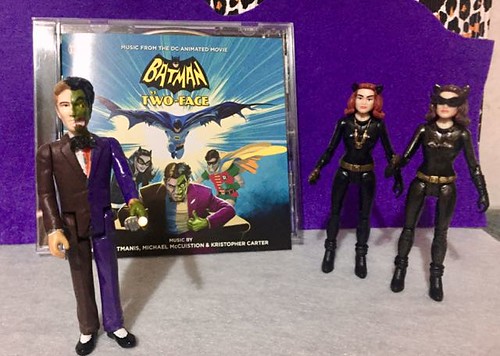 Batman vs Two-Face soundtrack CD by Ian McLean, on Flickr

Arrived in this week's post: the “FYE” exclusive soundtrack CD for “Batman vs Two-Face”. There is even music from the Harley Quinn & Joker hidden bonus Easter egg (on the Blu-Ray)! Thanks to my US pal, Matt, for tracking this down for me and posting in to Australia!
"Holy nostalgia, Batman!"
Therin of Andor

A few Bat-Items made their way into my stocking again this year...shock horror!

The DK publishing DC Comics Year by Year book looks fun-- the pic cuts off the closing date Ben, is it 1930-1960? I could get behind that because too many of these types of books go to today and for me there is nothing more boring than the comics era 1990-today.
Artist-Writer
http://WWW.ANDYTFISH.COM
Top

AndyFish wrote: ↑
Tue Dec 26, 2017 8:04 am
The DK publishing DC Comics Year by Year book looks fun-- the pic cuts off the closing date Ben, is it 1930-1960? I could get behind that because too many of these types of books go to today and for me there is nothing more boring than the comics era 1990-today.

I know I´m late, but finally I had the chance to get "Batman: A Celebration Of The Classic TV Series". It seems I´ll get it at home tomorrow! I also ordered "Batman VS. Two Face" on Blu Ray, but it seems I won´t get it till next year (bad times to get something outside your country with all the X-Mas stuff going on).
David Buceta
http://www.capitanpepinillo.com
Top

I haven't seen those Teekeez at my local Wal-Mart.

My Batgirl Omnibus just arrived yesterday. To be honest, it is very disappointing. This is one of the thinest omnibi I've gotten. The original product listing wasn't listed as volume 1 and had more stories. I think the other stuff was left off simply so there would be material for a volume 2.

Batman 214 was omitted, as were Batgirl's appearances in World's Finest, Justice League of America, Superman and Superman Family. Those were included in the Batgirl Showcase. Really, I should have passed on this, since I have all the stories in it elsewhere. The book itself is nice, if too thin for an omnibus, and probably would be a good purchase for those who haven't read the original stories elsewhere. Even though the title is Bronze Age, the book does include her appearance in Detective Comics 359 and subsequent Silver Age Detective appearances.