Anybody restore a Corgi 267 Batmobile?

I have one now and bought restoration parts so it will eventually be restored, the 1966batmobile forum has a thread of parts restorers. Since the release of the newer cars, the old Corgi restorers seem to have dried up.

I suggest buying the restoration parts and trying it yourself. The hardest parts (or scariest for a novice) are removing the rivets, painting the red trim, and mounting screws to replace the rivets you drilled out in step one.

See if you can buy a restoration step by step guide, so you know what drill bit size you require. https://www.ebay.com/itm/CORGI-3-PAGE-I ... XQ~6VQ4j-c


Also post in both our craft page and on that Batmobile forum, take pics, and ask for help. I’ve done a couple of builds and posted the step by step guide, and if/when I was stuck, people were always supportive with suggestions and custom parts too.

Personally, when I do mine, i’m Gonna try for the black chrome. The red trim will be the most frightening for me. The little figures will be fun to repaint, particularly Batman.

One of the coolest restorations had the Batman figure under the car painted in the 1960’s colors. Wish I still had that picture.

Thanks for the links, Szabol! I will do much more research before I take the drill bits to those rivets.

The windshield is cracked so I’ll have to get those rivets out if I want to replace it. SInce I regard the Corgi as a toy, and there are lots of screen accurate Batmobiles out there already, I might try a different approach.

1. Keep original: No repaint, just straighten bent axles, clean off dirt, replace only what is broken, leaving the car as original as possible. More of a clean and repair project.

3. Custom: I identified mine as a ‘75 with whizzwheels and green windshield. I might install the “wrong” earlier wheels (with the red bats) and rubber tires and strip and repaint it flat black also, quite “wrong”. The idea is to make it as classic and cool as possible.

Not sure what I’ll do yet. My thoughts starting out were to resurrect a total loss car from eabBay and customize it. Since what I got seems to be in pretty good shape with original figures, now I’m on the fence.....stay tuned...

by Blue Meanie
Although not true to how the Corgi Batmobile looked, this custom restoration still looks pretty awesome. 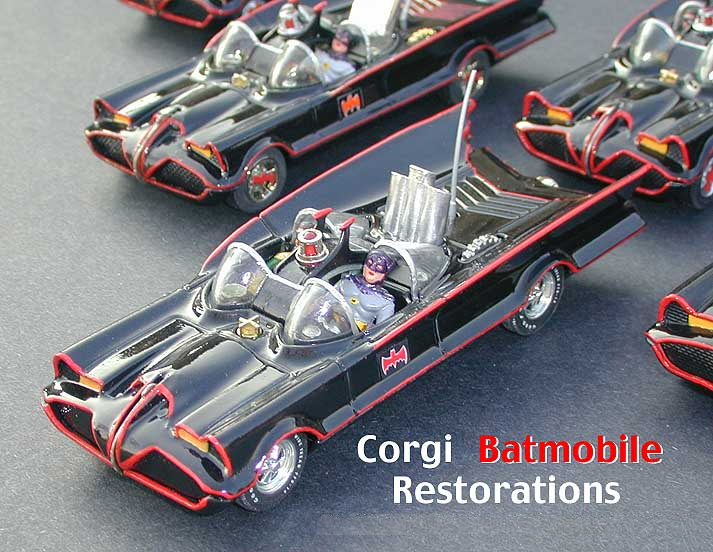 Blue Meanie wrote: ↑
Mon Mar 11, 2019 5:55 am
Although not true to how the Corgi Batmobile looked, this custom restoration still looks pretty awesome.

That seems to be THE definitive site on the Corgi 267 Batmobile! If you dig deep enough, you can find exactly which car is yours based on the info there. Somebody did an enormous amount of work on it.

While those pinstripes are cool and the restorations are excellent, I think they went a little too far. If a car owner wanted that, then a newer version would be even more accurate, like this one: 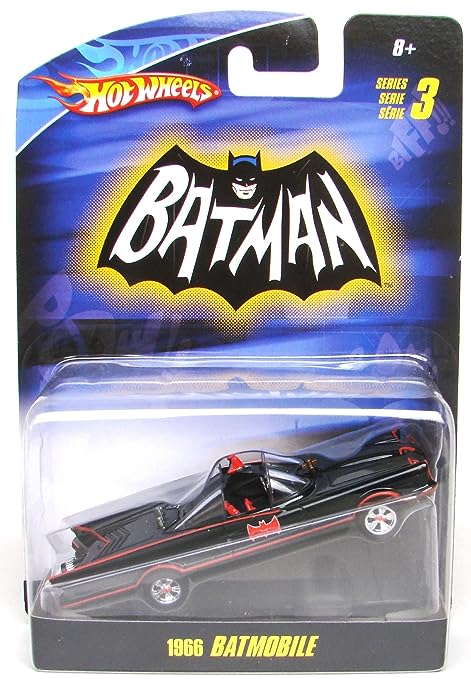 I actually like the original look and feel of the picture of your childhood car that you posted earlier! I think the eBay car I bought, coincidentally, is pretty close to yours. I am leaning toward a repair/clean job on the one I just bought.

I am using this page to get educated:

by Lou Szabo
In the case of a restoration, see if you can find the right packaging too. I have a reproduction package, and a diarama. Back in the day, a guy named UKSteve made some really excellent backdrops,including an airfield for the Batcopter

Szabol wrote: ↑
Mon Mar 11, 2019 5:27 pm
In the case of a restoration, see if you can find the right packaging too. I have a reproduction package, and a diarama. Back in the day, a guy named UKSteve made some really excellent backdrops,including an airfield for the Batcopter

Thanks, Szabol! I’ve thought about that. The “period correct” packaging that goes with my ‘75, 8 spoke whizzwheels, green windshield, unfortunately isn’t the one I like.

The earlier one, is awesome! I am thinking about breaking some rules and using the “wrong” packaging with my whizzwheels ‘70s acquisition, lol!!

I might just draw my own silver age Batman backdrop for the model. I drew the DC No. 27 version as well as other versions of Batman everywhere when I was a kid, ha ha! ...I am waffling all over the place thinking about what I’m gonna do with the thing.

Thanks for the info!

by John Mack
My 1966 Corgi came in this box. Mine was shiny black, had gold hubs with the Bat logo on them, blue window bubbles, a flame that moved as the car was rolled with no tow hook (trailer hitch) and a detailed interior with Batphone and fire extinguisher. The box was apparently the "B" type. I was too young to have had the first issue box. Oh, and apparently Corgi made different color "rocket pellets" as well. Mine were yellow, but I've also seen red ones as shown above.

by Lou Szabo
Buy more than one. I have one all done up in a midnight blue with red trim. Until I saw the show in color, I thought the car color followed the books

I’ve been watching those videos! I like the British guy who works on those old models in his garage. If you’ve still got a corgi Batmobile painted blue or a different color, please post some pics! Yes, the car and Batman’s suit looked blue in the comics. I believe they were depicting black with blue....or something like that, I could be wrong.

My car came in today and to my surprise it is in way better condition than I thought. Chain cutter, rocket tube wheel both work, the car rolls straight...I can’t justify breaking out the drill and cracking it open. I think I am going to leave it as is because some child obviously played with the car, but he didn’t really mess it up. It has character, ha ha! Maybe I’ll get some new decals and rockets, that’s it.

by Lou Szabo
This guy has stickers for the Corgi
https://diecaststickerman.webs.com

There are many more videos on restoration. Also there is a larger scale version of the Corgi. The Corgi is 1/43, and this other one is a POLITOYS POLISTIL 1/32 scale. It’s kind of neat to see a slightly larger Corgi. I have an old thread on Batmobiles, let me see if I can find it.
viewtopic.php?f=4&t=31&p=50112&hilit=Polistil#p50112
Polistil dark blue custom

There are many more videos on restoration. Also there is a larger scale version of the Corgi. The Corgi is 1/43, and this other one is a POLITOYS POLISTIL 1/32 scale. It’s kind of neat to see a slightly larger Corgi. I have an old thread on Batmobiles, let me see if I can find it.
viewtopic.php?f=4&t=31&p=50112&hilit=Polistil#p50112
Polistil dark blue custom

Hey, thanks! It deserves stickers and rockets, also.

I’ve been looking for a Corgi Batmobile for soooo long, I can’t imagine taking a drill to it. Go ahead....call me a chicken. I’m leaving it as-is.

1. It’s very similar to the die cast toy cars my son played with when he was young. We have a toy bucket full of them..chipped and scuffed like the Corgi. The main difference is my son’s toys all had that pull back gimmick. Aside from that, they’re all very similar.
2. It’s definitely a toy, not an adult collectible.
3. It’s a little smaller than I remembered but I must’ve been 8 or 9 when I first saw a Corgi Batmobile.
4. The Batman and Robin figures....wow. Uh, that’s the most half a**ed paint job I’ve ever seen, ha ha! If I were a kid, I really think I would’ve removed them because the car looks cool, the figures DO NOT, lol! (They’re not going anywhere). 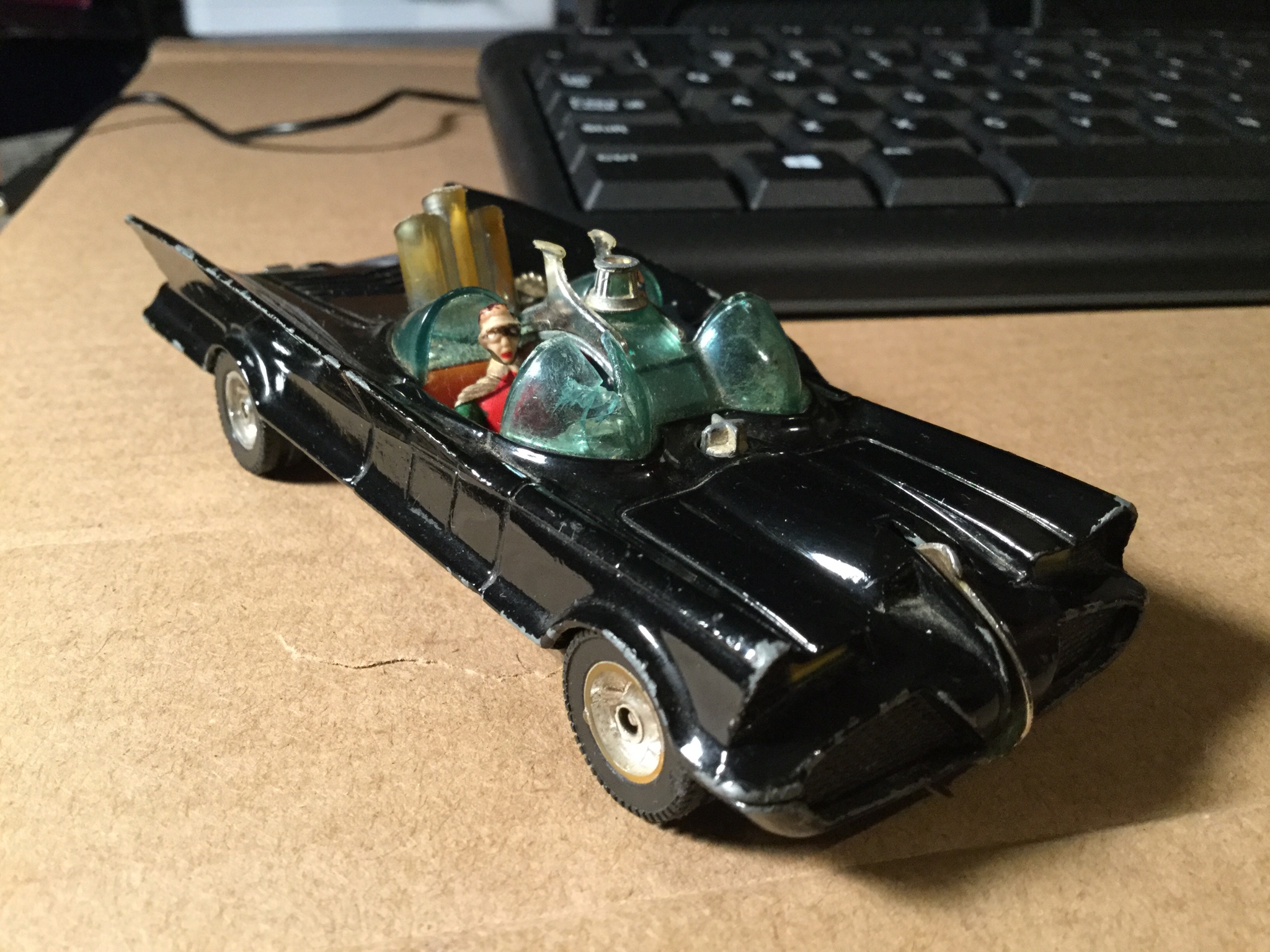 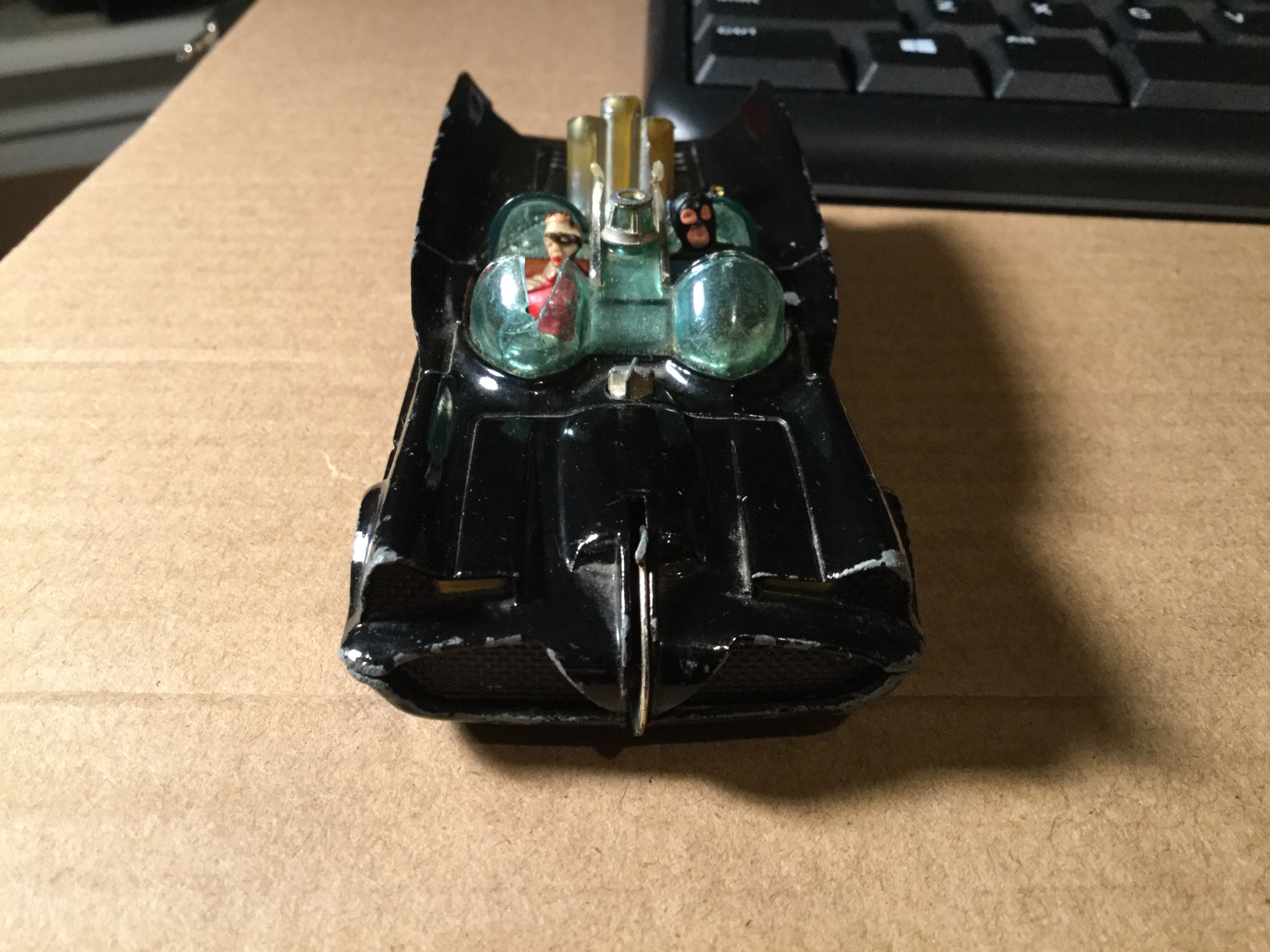 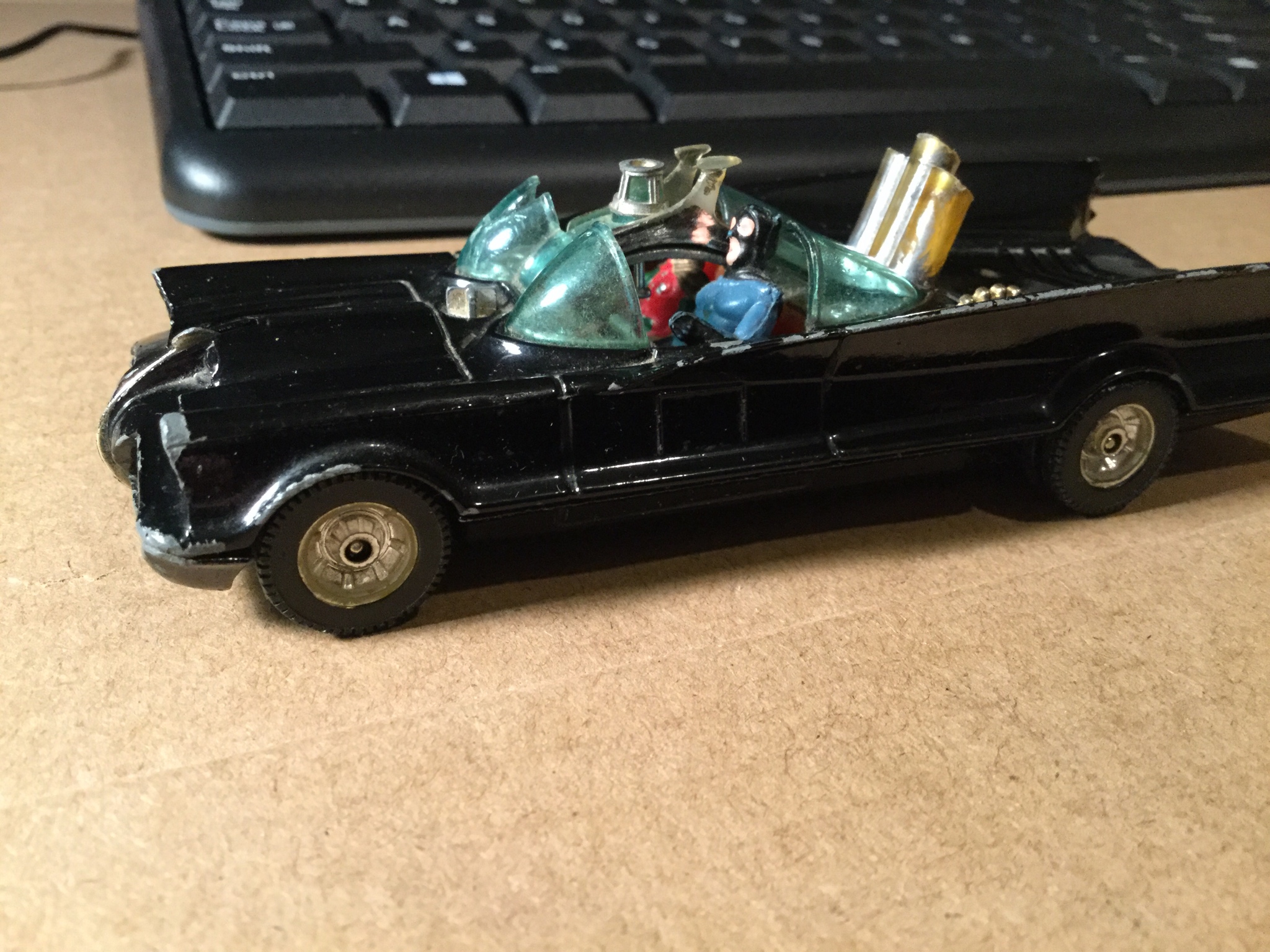 by Lou Szabo
A little touch up and you are good to go.

I can tell a little about the Batmobile from it’s condition. It looks like “little Timmy”, who is probably in his mid fifties now like me, pushed it across the room and smacked it into the wall or some Hot Wheels cars a few dozen times. The front of the car is dinged and chipped. The metal is slightly deformed from one of the impacts.

He probably broke the windshield trying to get Robin out.

He got bored with it after a few months and it ended up in a toy bucket, drawer and/or the attic for the next 40 years. If it’d been played with more, it wouldn’t have survived, lol!

I think it’s cool that I’m rolling an original 1975 whizzwheels Batmobile around on my desk at work! The least I could do is get a beacon, bat decals, and replacement rockets. Maybe soon...

by Lou Szabo
There are a ton of Corgi 267 Batmobile parts on eBay now. Good luck
All times are UTC-07:00
Page 2 of 2
Powered by phpBB® Forum Software © phpBB Limited
https://www.phpbb.com/