Forum rules
You must read the MERCHANDISE RULES before participating here.
Post Reply
7 posts • Page 1 of 1

Anyone see the comic con images of the new Alfred figure coming out? It’s got the comic, 1989 and 1966 Alfred head sculpts with it!!!

It'll be pretty cool after all this time to add an Alfred figure of this kind to our collections. Now the small matter of finding a suitable donor figure with a more suitable costume...
http://66batblog.tumblr.com
http://benbentleyphoto.com
Top

Mattel? So this is in the 6-inch scale?
Beneath Wayne Manor
Top

I'm not sure, but I think the first head on the left might be The Outsider, a villainous alternate-Earth version of Alfred. Can anyone who went to SDCC confirm?

The character is an updated version of a villain dating back to comics published at the time the TV show debuted. Alfred had been killed saving Batman and Robin in a 1964 comic—an event with many repercussions, including prompting Aunt Harriet's arrival at Wayne Manor. Plans to include Alfred in the TV show made DC reconsider the butler's comic-book death, so the comics scribes cooked up a months-long mystery storyline in which Batman and Robin were tormented by The Outsider, an unseen, near-omnipotent alien. It eventually turned out The Outsider had taken possession of Alfred just before boulders crushed him—learning all of Batman's secrets in the process—and used the info to try to destroy the Dynamic Duo. Batman eventually restored Alfred to his old self, after which Alfred and Aunt Harriet agreed to co-manage the Wayne household.
Top 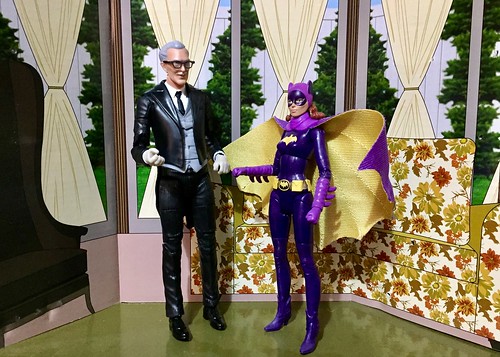 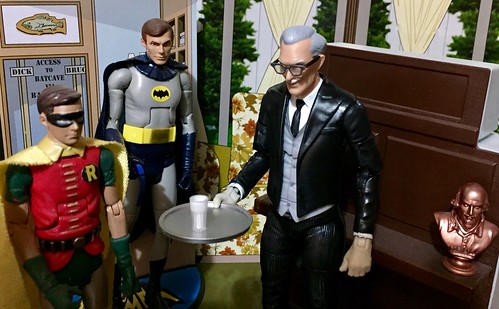 Robin with Bruce and Alfred by Ian McLean, on Flickr
"Holy nostalgia, Batman!"
Therin of Andor