Over on another thread I posted some pages from a 1969 Batman Comic Book-- and I mentioned that at one time I owned one of the original pages-- I sold that page during my divorce and I regret it to this day. It got me to thinking, are there some things you just would never part with? I have several, which surprised me because I'm in a cleaning house get rid of stuff mode lately. Here's a few off the top of my head (I'll try to keep it Batman centric but I might toss in an item of the era which I think fits). 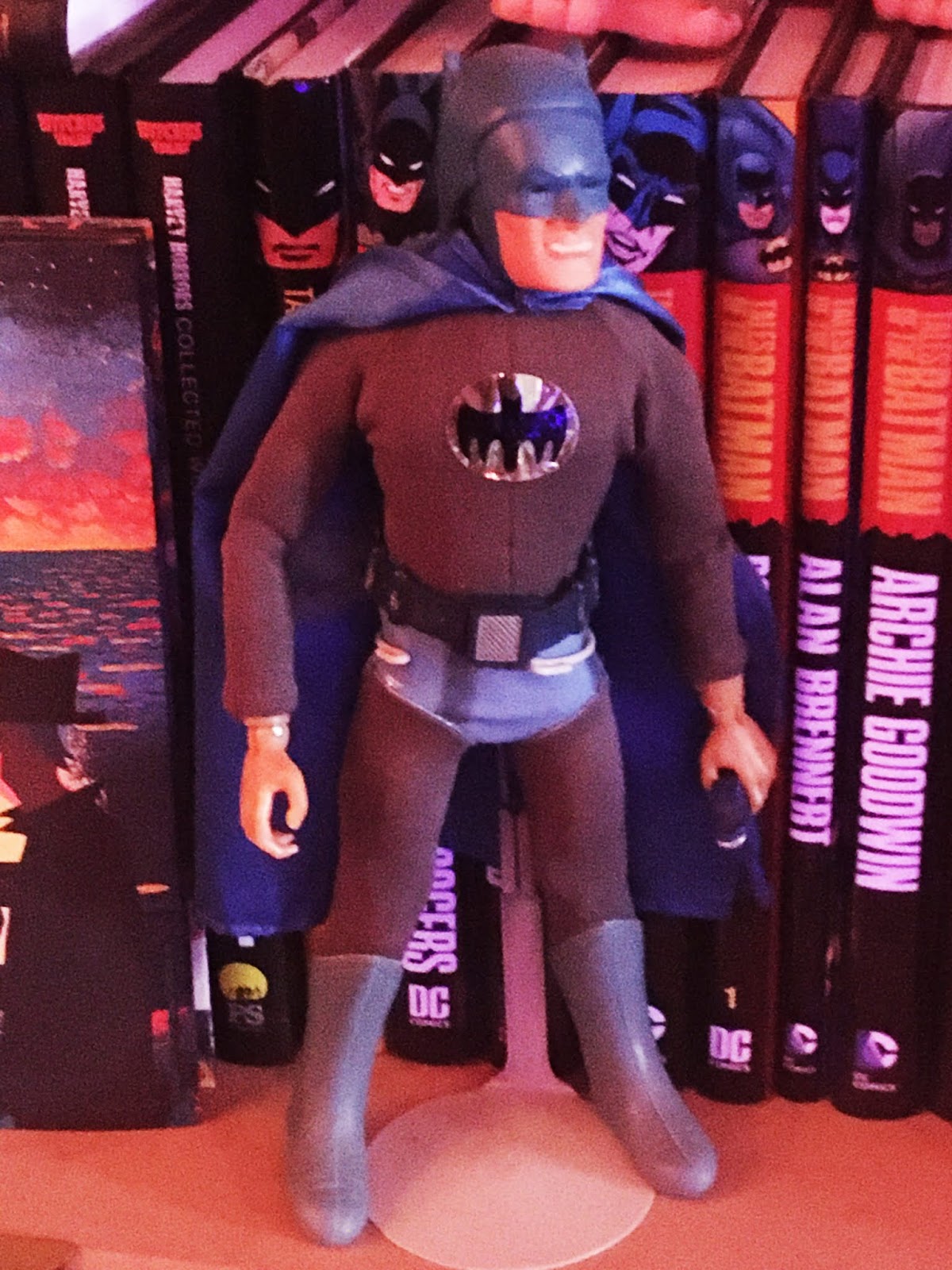 1- Ideal Captain Action Batman; this was the first Batman action figure in the US, and I had one (as well as most of the other costumes as a kid. He's the third one I've owned and this one is going with me to the grave. I lost the original one to the ravages of time, sold the second one and regretted it immediately and bought this one. He's got the wrong cape but I kind of like how it looks because the vinyl one was constantly falling off. I may get one of those someday. 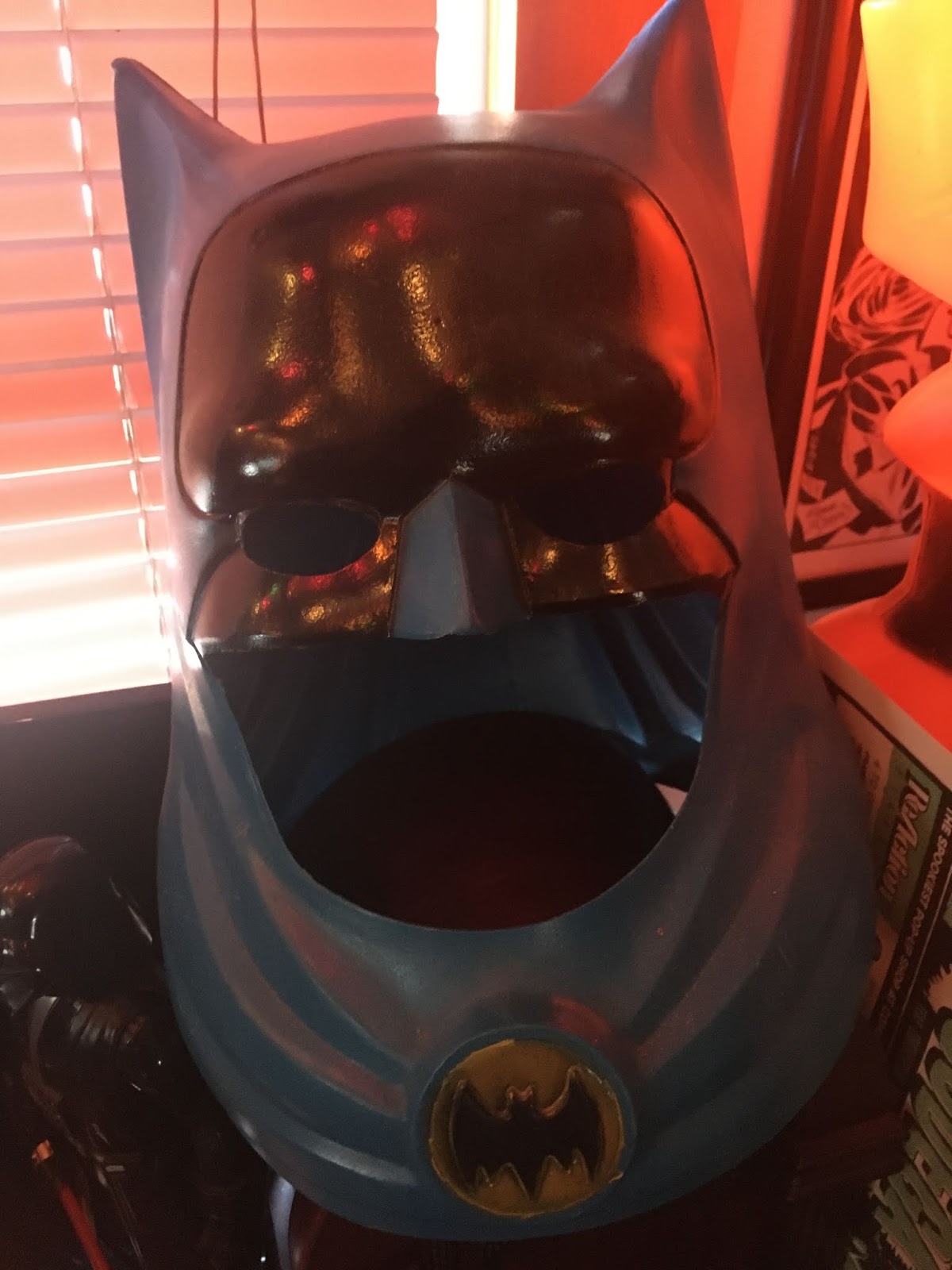 2- Ideal Batman Helmet; NEVER had one of these as a kid. I missed out. In the 70s I was walking through a flea market buying old Batman comics for $1 each and saw this in dead mint condition (also for a buck). I grabbed it and the guy asked me if I'd bought it for my kid brother-- heck no-- it was for me (i think I was maybe 13 at the time). Sold that one during the divorce too, this one I bought for more about ten years or so ago. I regret not buying a mint in bag one that was on eBay for years, this one is in nice condition but I'd love a really mint one.

I'll post more but let's open up the floor to other members.
Artist-Writer
http://WWW.ANDYTFISH.COM
Top

Yep, I didn't have the ideal helmet in the 60's either.
Grabbed one last year.
I will be in the old folks home with it!

I had the Action Boy Robin costume but no figure when I was a kid. Stuffed it with cotton.

One day I hope to get the Cap Action Batman and Robin...Oh, they will be mine! and never leave!
Quick, Everyone, Flee for your lives, into the street!!!!
http://www.williamsstudio2.com
http://www.etsy.com/shop/WilliamsStudio ... eller_info
Top

The Batman Strangest Cases Treasury Edition, which I got when I was 6 and which may be my favorite comic that I own.

The first Power Records Batman album. My jock dad has always hated that his nerdy son liked comic books. I asked him for the album when I first saw it in the store. Of course, he said no. My grandfather on my mother's side was with us and he told me to go get the record and he would buy it. Now that he's passed, I treasure the gift of the record even more.

The Hamilton Batman from the late 80s. At the time, there wasn't a lot of Batman merchandise and my mom stumbled across this and got it for me for Christmas. I think it is still one of the best looking Batman figures that I have...very Jose Luis Garcia Lopez.
Top

Took me quite a while to get both Hot Toys so I'd say they'd be the last to go.

Captain Action Batman for me too. I remember as a kid staring at the CA ads in the comics wishing I had one. I was born the year they were released but in the early’70s had access to several comics from ‘66 and ‘67 that featured the ads. My current one is my second one; I, too, sold my first one and quickly regretted it.

I have a caped Batman Pez dispenser from ‘66 that I won’t part with. I also have the yellow Topps card box and blue real photos Topps wrapper, the original Corgi Batmobile box and all six Pop-Tarts comics. I think those will all be with me until my dying days.
Top

I guess it is not surprising that the most important items in my collection are from my childhood when that sense of wonder was still in full force. So...

1. The comics: All of the 100 Page Super Spectacular issues of Batman circa 1974-75. They featured a new 20 page story by O'Neil, Novick, and Giordano backed with theme reprints like Meet The Batman Family, Batman's Trophies, etc. What a great way for a young fan to have access to the history of the character! Include the tabloid size Limited Collectors Editions and Famous First Editions of Detective 27 and Batman 1 as well as the hardcover Batman From the Thirties to the Seventies.

2. Transogram Batman bank: A blow molded plastic bank that served as the first Batman figure in my collection. Hollow and oversized, I repainted it back in 1989 when I wanted to display it during the second wave of Batmania and regret it to this day.

3. Corgi Batmobile: This was not entirely screen accurate, but close enough to provide hours of play. It has held up remarkably well, so it sits in a display with the other Corgi Batmobiles based on the comics of a decade ago.

4. The Golden Records Batman book and record set: This was released in 1966, but I got mine at retail in an S. Klein department store in 1973. It included a comic book with the origins of Batman and Robin and The Joker's Utility Belt. I remember having lots of fun watching the tv show adaptation to follow the story beats. The show was fairly faithful, but did not give the comic any credit. Anyway, the set also included a Batman Club membership card and button and framed needlework of Batman. FWIW, I also bought the corresponding Superman set that day.

1. The series blu ray: The best representation of the series to date and I started out taping on a VCR in 1985 when a Philadelphia station was running terrible film prints of the show. The show was my first exposure to the character, so my collection would be incomplete without it.

2. The Hot Toys and NECA figures: Great representations of our heroes and not inexpensive. I appreciate that I can change their poses when I tire of seeing them in one position.

3. Tweeterhead Batgirl and Catwoman: These are the only two characters that I own from this company, but I love how the sculptor captured not only the features of Julie Newman and Yvonne Craig, but the characters' grace and body language as well. Clearly the best depiction of each character in the recent flood of 66 tv merchandise.

I also have great fondness for those Power Records and the Hamilton Batman.
Top

This is the only remnant I have of first-wave Batmania. It was in the bedroom I eventually shared with my two brothers (the younger one having been born during the series run). I took possession of it sometime during my college years. I love it, but it's no museum piece. It's rusty and a little dinged up, and I still in use as a trash receptacle.

Great stuff folks, thanks for sharing.
I love that waste basket and the DC Comics 100pagers are a favorite of mine. Those were how I discovered Batman's golden age, which IMO is his best period.

For the modern stuff, love the Hot Toys figures -- and Wally convinced me to go with the Tony Mei suit replacement which actually did make a difference, but these are definitely keepers; 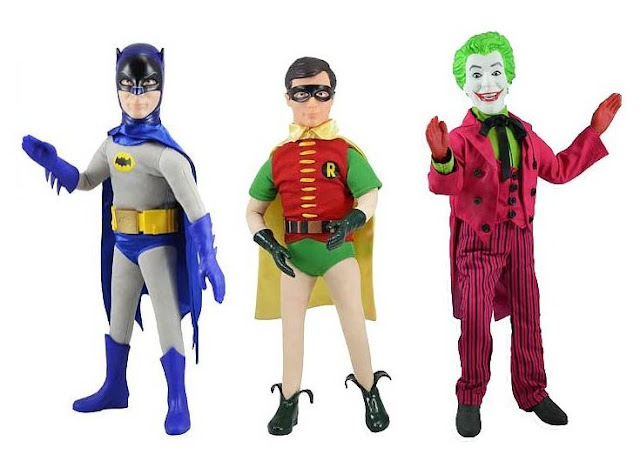 Wonderland Toys talking dolls-- love these things! Wish I had bought more at retail. I think these'll be worth something when I'm in the nursing home.

AndyFish wrote: ↑Mon Nov 04, 2019 1:31 pm Wonderland Toys talking dolls-- love these things! Wish I had bought more at retail. I think these'll be worth something when I'm in the nursing home.

I keep my Wonderlands on the shelf with my NECAs. Love them both.

Are those wonderland figures particularly pricy or hard to find? They look nifty and I might try and track them down.
"Batman told him a super funny joke. When the creature didn't laugh, that was proof!"
Top

THE BATPHONE! wrote: ↑Mon Nov 04, 2019 3:42 pm Are those wonderland figures particularly pricy or hard to find? They look nifty and I might try and track them down.

They got a very limited release so there are not a lot of them-- they are in the $60-$100 range when you can find them. Each one talks in the actors voice.
Artist-Writer
http://WWW.ANDYTFISH.COM
Top

Dang! I guess I’ll keep my eyes open for a deal. Thanks for the information!
"Batman told him a super funny joke. When the creature didn't laugh, that was proof!"
Top

I wanted the Captain Action figure, but with the costume it was too much - I think we got a Stony Smith 4 pack with a ton of accessories for about the price of Captain Action.
We had a Marx Batmobile for a short time. I don't know what happened to it.

Wants (from my 1960's mind and the Sears catalog):
All the Aurora Monster and Superhero models in the 1960's (I bought them in the 1970's)
Ideal Batman Cowl Cape, Utility Belt
Batman Gloves (saw them in a store, but too small for my hands then)
Batman slippers and PJs, and Batmobile sheets
Captain Action with Batman, Superman, Spider-man
Ben Cooper Batman Playset with later Batman mask from the costume (Have it now!)
Some days you just can't get rid of a ... SHARK!
Top

Couldnt part with this