I was going to make a goof post (sort of) about how I’d never part with anything Batman, including one of my T-shirts that is almost illegible.

Then I remembered I have gotten rid of a Batman item once. It was a simple coffee cup, black with the common yellow emblem. Well made and I’d still be using it as my daily - except - it was huge. It probably held a pint. When I’d take a sip of coffee, I could see inside of it (not kidding). It was just too big.

I ended up giving it to a coworker. It’s his daily cup and he uses it constantly. Funny, I just saw it today.
“What's important is that the world know that all visitors to these teeming shores are safe, be they peasant or king.”
Top

This thread got me thinking about all the stuff I've already parted with, somehow or other, including my blue AHI "bump and go" tin Batmobile (disappeared somehow over the years and much missed), my Corgi Batmobile (likewise vanished, but since replaced) and Batboat (not yet replaced, though I somehow held onto the trailer), all my Mego figures except a (capeless) Batman and The Joker and Penguin, a copy of Batman #251 I bought off the spinner rack and probably couldn't afford to replace now (likely stolen and I can guess by whom), the old record that came in a kit with a comic and embroidered Batman "portrait" (I have both of those, but not the record), the old Leo the Lion record "Adventures of Batman" with that immortal Infantino cover, the talking alarm clock, the Aurora kit, the Colorforms set, a radio, various beautiful old coloring books, etc.

Then there's the stuff I crossed paths with but didn't have, like the Remco Batmobile dashboard toy a friend had and I could only pine for as it was a hand-me-down from his older brother and no longer being sold. A Batcopter model my first grade teacher gave away at the end of the year, but my name wasn't the one pulled from the hat. The Ideal play set from 1973 with little cardboard figures (I opted for Superman instead). A Pix-A-Go-Go set that turned up still new-in-box in a going-out-of-business sale at a department store in 1985 or so, discovered in a storage room and offered for the original price even though it was from the 60s, but insanely I passed it up (!?!?). I actually had the coveted Lego "Wayne Foundation" play set but I sold it a few years ago for a princely sum. Sometimes I wish I had it back, but only so I could sell it again.

So let's face it, I'm the worst collector ever. But what did I manage to get and hold onto? At the top of my list would be the "Batman from the 30s to the 70s" book and the Viewmaster reels I looked at a gazillion times, vintage posters and comics I had autographed by Carmine Infantino, Nick Cardy and Dick Giordano after nice chats with each gentleman, the "Batman vs the Cheetah" Big Little Book that for some reason fascinated young me, my autographed photo of Adam I got at Mid-Ohio Con, a DIY custom "Mego" '66 Batman I finally completed with help from a friend in the UK, the NECA Adam figure and a couple storage boxes full of bat- stuff I haven't opened in years, Warner store stuff, BTAS figures, who knows what all.

In the end it's all just stuff, but it's been fun acquiring it. Not sure I couldn't live without any of it, except for the memories attached.

Those tin Batmobiles are plentiful and reasonable in Japan at yard sales and antique stores. I found a Blue one (since resold) for about $100 in C8 condition on my last trip. We're planning another one for 2020 so I'll keep an eye out.
Artist-Writer
http://WWW.ANDYTFISH.COM
Top

That would be phenomenal. For such a kind act, I'd be sure and remember you in my will. Of course the only thing I'd have of value would be a tin Batmobile.

Batman stuff I once owned, but are gone now. During the run of the TV series Down Under, Santa Claus brought my brother and I a Batman figure each (1967?). These were not fully articulated, like the 8" Megos that would turn up in 1972. If I recall correctly, Batman would have been about 11" and only the cape was fabric (or thin, blue translucent plastic?). A sticker on his grey plastic chest?

In the bottom of our Santa sacks was a Robin figure each. About 4", non-articulated and posed in a slight crouch, rather like the Pocket Action Heroes of the late 70s. He was a "dangler", with elastic attached to a loop on his head, or around his neck? The cape was rubbery and metallic gold. There was probably a matching Batman in the same scale, but my grandmother had already found the Batman figures.

Probably both unlicensed knock-offs. The differences in scale didn't really bother us at the time.

Actually, the Robin was not unlike the one depicted here. I was sure the cape on mine was gold, same colour as the Robin cape in the diecast TV Batmobiles.
http://batcavetrophyroom.blogspot.com/2 ... glers.html
"Holy nostalgia, Batman!"
Therin of Andor

I would hate to part with anything in my collection as I've worked so hard to build it (somewhere over 2,000 items now). That said, I do miss some things I had when I was younger like my original 1st-issue MEGO Batman figure with removable cowl. I remember how over the moon I was when first walking into K-Mart and seeing all those figures. The world had suddenly changed - and for the better! I also wish I still had my Simms/Duncan Batmobile. It was simple but so neat and so much fun. I had Batman puzzles in the late '60s I would make over and over just to marvel at the complete images. I had a Batman bicycle license plate from Expo '67 that would have been worth something now. What I miss most? A Milton Bradley Batman board game I got in the early '70s. This was before MEGO and for me was a major Batman coup at the time (along with the colorform set) when it seemed Bat merchandise was scarce. I really regret not keeping it.

Therin of Andor wrote: ↑Sat Nov 16, 2019 12:22 am Batman stuff I once owned, but are gone now. During the run of the TV series Down Under, Santa Claus brought my brother and I a Batman figure each (1967?). These were not fully articulated, like the 8" Megos that would turn up in 1972. If I recall correctly, Batman would have been about 11" and only the cape was fabric (or thin, blue translucent plastic?). A sticker on his grey plastic chest?

Well, that's weird. Just hours after typing that remembrance, this image popped up on Facebook. I think this one is a bootleg from the 1970s or 80s, but probably using the same moulds? 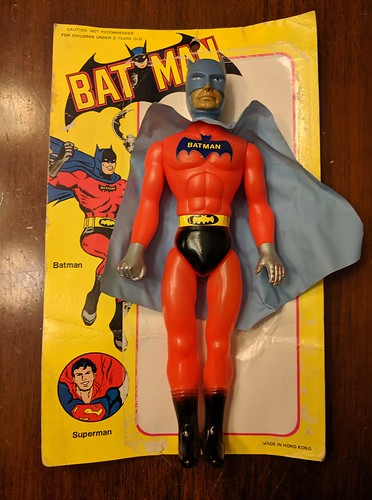 Therin,
Was it this one?

Definitely not with that face! 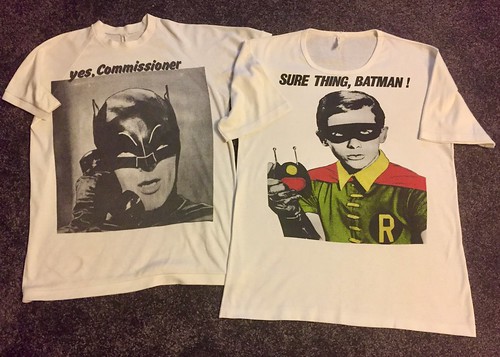 My niece just volunteered to take on my cushion challenge. They will be separate cushions, Batman backed with blue satin and Robin with yellow. I also sent her an "Adventures of Superman" T-shirt, of similar vintage, with Lois Lane (and edelweiss bouquet) and Superman, which will be backed with red satin.
"Holy nostalgia, Batman!"
Therin of Andor

My niece just volunteered to take on my cushion challenge. They will be separate cushions, Batman backed with blue satin and Robin with yellow. I also sent her an "Adventures of Superman" T-shirt, of similar vintage, with Lois Lane (and edelweiss bouquet) and Superman, which will be backed with red satin.

Some of my favourite T-shirts of the 80s and 90s, now preserved as scatter cushions by my niece! 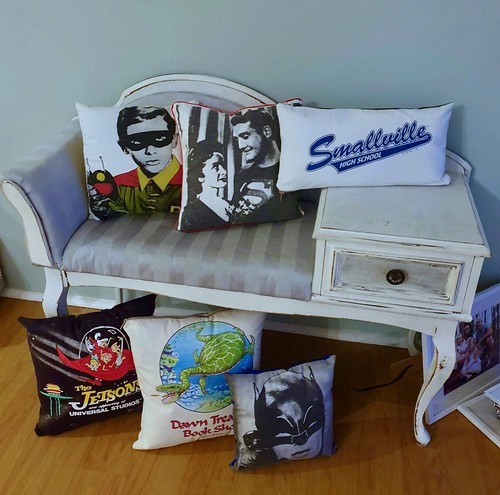 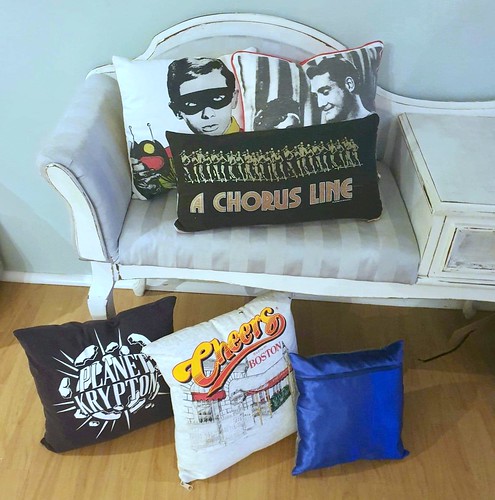 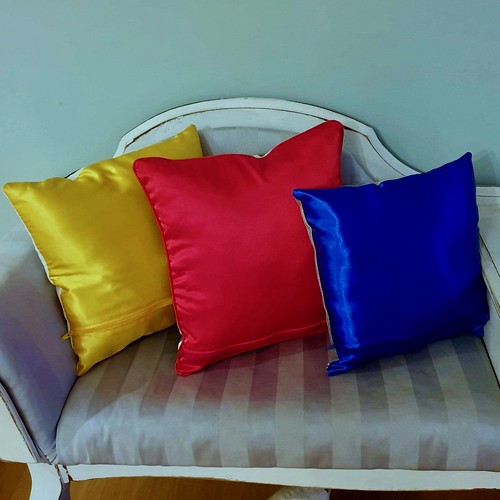 My niece did try to save the captions on the "Batman '66" shirts, but the shapes weren't working. They are beautifully lined with iron-on interfacing! Gorgeous.

I couldn't bear to toss them out but the yellowed underarm stains from 80s spray deodorants had made several favourites unwearable, no matter how much dieting. Not that I actually needed more scatter cushions, but I did still need these shirts in my life.
"Holy nostalgia, Batman!"
Therin of Andor

Just FYI, there's a guy on Etsy (CreativePal) that sells reproduction boxes of the Ideal Batman helmet and cape. I bought one for a helmet I picked up on Ebay, and it looks really nice.
Top

The Batman stuff I'd hate to part with would be, in the following order:

- A 1990 Batman poster by Steve Rude, featuring Batman with a flock of brown bats

- a pair of Pat Broderick Batman art prints from the same year, sold on HSN

That's about it for me.
Top
Post Reply
43 posts