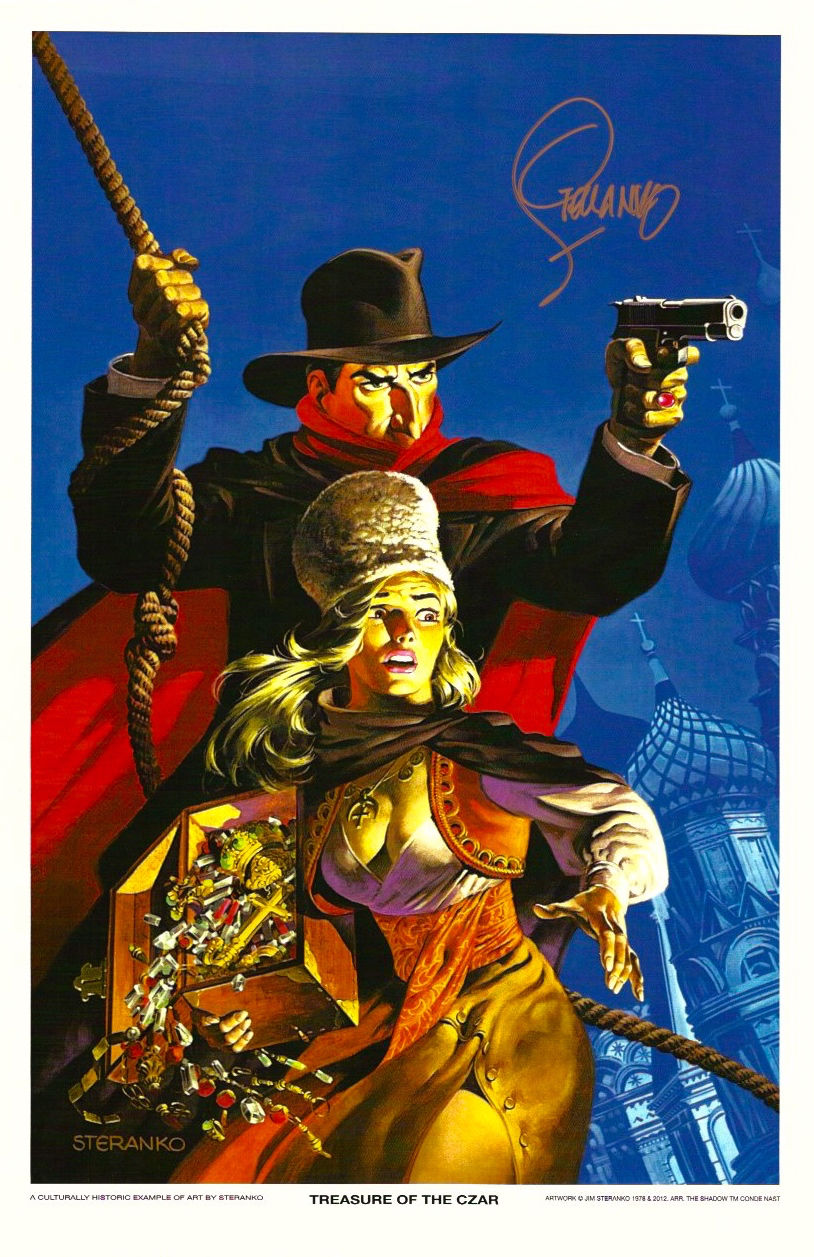 Any board members fans of The Shadow? Batman owes a great deal to this pulp character and the very first Batman story from Detective Comics #27 was a direct riff of an earlier Shadow Pulp from 1936 called Partners of Peril.

Interestingly, a company has started to produce full cast audiobooks of some of The Shadow (and Doc Savage for that matter) pulps. You can get them on Amazon or Audible dot com and they are like Old Time Radio Shows but with a slightly edgier feel to them since they adapt the pulps. They're also about 4-5 hours long with each adventure.
Highly recommended!

by A. Pennyworth
I did listened to some of the old time radio series in years past when I do my walking exercise, and I have collected the "Shadow-mobile", and the other Shadow toys/vehicle of this line. The Shadow car is a copy off of one of the ahi Batmobiles.

by THE BATPHONE!
I've always been intrigued by the shadow, but never have read any of the pulp stories...this thread might inspire me to do so!

by maniac cop 5
Thanks for the heads up, as i hadnt heard of these. Ive got a pretty good Shadow collection including the old Ideal Library hardcovers from the 30s and many items from Walter Gibsons personal library and collection. One whole wall in my toy room is covered with Shadow prints and art mostly by Kaluta and signed ones by Steranko.

THE BATPHONE! wrote: ↑
Tue Mar 26, 2019 7:31 pm
I've always been intrigued by the shadow, but never have read any of the pulp stories...this thread might inspire me to do so!

Start with the early ones-- in fact I'd go with THE LIVING SHADOW which is the first story. Around the first 12-15 stories have loose connections to each other as agents come and go. It's also the purest era of The Shadow in terms of what I think of him. He's not Lamont Cranston for one, and he's almost a supernatural being.

My favorite stories for those of you looking to jump in;
THE LIVING SHADOW
EYES OF THE SHADOW
THE SHADOW LAUGHS
THE SILENT SEVEN
THE BLACK MASTER
THE SHADOW'S SHADOW
THE BLACK HUSH

If you go to Archive.org they have two complete pulps scanned from the series so you can see what they were like, for free. One of the stories is THE BLACK HUSH which is about a power outtage in New York City which sends everyone into a panic.

by SprangFan
Big fan of The Shadow, and it's interesting you led off the thread with a Steranko image, because he's a big reason. Those paperbacks of the 70s with his cover art were gorgeous, and his long chapter on the Pulps in "The Steranko History of the Comics" got me obsessed with finding out more about pulps in general. Then Batman actually met The Shadow in two of my favorite stories from the 70s.

On balance, I think I like "The Spider" better just because the character and his world are flat-out nuts. Violence, mayhem and destruction unfold at near-Biblical levels issue after issue, and the hero himself is arguably insane. Allegedly it was Stan Lee's affection for this character that got him started thinking about a "spider" themed character and you can certainly see the roots of the Marvel style in the over-the-top melodrama of Norvell Page's novels.

"The Shadow" I would classify as more "moody and atmospheric" not the wall-to-wall action of The Spider in spite of all those great covers by Rozen (and others) showing him with guns blazing. Walter Gibson was a terrific writer who understood the appeal of the outre and mysterious as a Houdini expert and magician himself. The character had many layers to him, and those who stuck around for a while realized even "Lamont Cranston" was just another disguise.

When comic books went in the toilet in the 90s, it happily coincided with a number of reprint projects involving the pulps, so I transferred my affections to that genre and never (well, rarely) looked back.

Thanks for the tip about the audiobooks, I'll be sure to check them out.

by AndyFish
SprangFan and I are brothers from another mother.

The Spider was indeed The Shadow on steroids. By the third issue of his pulp series there would have been no one left in New York City because the populace had been wiped out.
The only thing I didn't like about The Spider was his disguise-- on the covers he looked great-- like a Shadow rip off with a black mask (they told the artists to do that) while on the inside he had the cape and slouch hat but also a hump on his back and a fright mask that had a hooked nose and fangs-- doesn't scream "Spider" to me at all. The Serial got it right-- they put him in a webbed costume. The primary reason I recommended the early novels is that they were much more blood and thunder-- The Shadow wasn't as slinky in those-- more a force of nature.

The Spider novels have been adapted to audio books almost to completion but they are done with the single narrator style which just doesn't appeal to me as much. Still fun though.

And Steranko really "got" The Shadow. He understood that he doesn't wear a standard Fedora and he doesn't wear a sun hat or a cowboy hat-- it's a wide brimmed Fedora. Often cover artists like Rosen made him look like he was wearing Aunt Petuna's gardening hat at times. The Steranko covers which graced the paperback reprints of the 70s are what brought me to The Shadow too.
All times are UTC-07:00
Page 1 of 1
Powered by phpBB® Forum Software © phpBB Limited
https://www.phpbb.com/