When I was a kid, my folks named my first dog Ralph, after the funny puppet on "The Jimmy Dean Show." (With Jimmy's accent it sounded like he was saying Ralph, when in reality it was Rowlf)

Fast forward to third grade and I become aware of some funny puppets on a new show called "Sesame Street." Although my third grade teacher Mrs. Wertish called it "See-Same Street." (I'll never forget that)

I had no idea that my dog's namesake was at all related to these funny puppets on...ahem...See-same Street.

Fast forward again to the late 70's when I became obsessed with "The Muppet Show." So obsessed, that at 19 I taught myself puppet-making, and built about 24 Muppet replicas, hoping to someday become a Muppeteer, or as they're now called, a Muppet Performer.

Fast forward to 2013 when I found a fabricator who could make bang-on replicas of Kermit, Gonzo and Animal. Of course, I had to add them to Planet Wallywood. And in 2017 I had a different fabricator make a replica of Mahna Mahna (I also have a penchant for the more obscure Muppets.)

This sparked an interest in getting back into building, so I figured I'd start with an easy one. But which character?

When I was sourcing fabrics for Mahna Mahna, I needed the perfect, ratty green fur for his vest. I found the perfect stuff. When it arrived I started thinking it make a great Oscar the Grouch. So I ordered the same type of fur, but in brown for Oscar's eyebrows. When it arrived I started thinking it would make a lovely Rowlf! And it all comes full circle.

Rowlf is a good character with which to make a gentle return into puppet building. Nothing moves on him, and his shape is pretty simple. Then I started researching and found out that unlike Cookie Monster, Beaker, Oscar and other "live hands" Muppets who had no skeletal understructure...Rowlf actually had shape under his fur! Shoulders, a back, a tummy, forearms, etc. So after I fabricated a head I was happy with, I started fabricating the understructure pieces.

Fast forward to today, March 27, 2019...my Rowlf is finally complete! I'm very proud of him and he'll be making his public debut at this weekend's WonderCon in Anaheim.

I'm on the path to do an Oscar next (complete with trash can) and after that an obscure Muppet called "Beautiful Day."

So happy to see this completed and watch his progress over these many months.

Fantastic! I believe Rowlf is considered the first Muppet. I saw him, Kermit, and others at The Smithsonian quite a few years ago.
Top

I always thought that Rowlf very much resembled Grover, but the first Grover was... brown!

Here is lovable, furry, old, brown Grover at the Smithsonian with my Andorian Sock Monkey, who *is* blue. 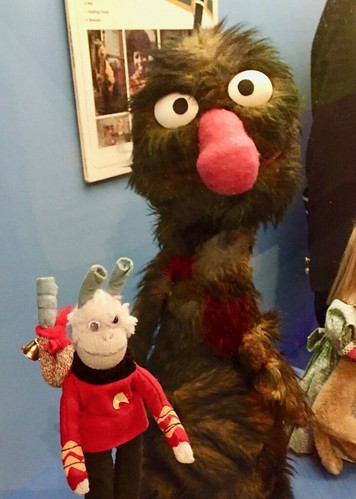 Thanks Therin! Early Grover always looked green to me on TV and in pictures. Amazing that he looks more brown in person. Early Oscar was also orange!! Funny how they decide to make changes.

And Jim, while Rowlf was one of the first Muppets, he wasn't the first. Sam and Friends on local TV in D.C. had a cast of weird characters including an odd-looking Kermit.

However WAS the first Muppet STAR, when they took him from a Purina Dog Chow commercial and put him on the Jimmy Dean Show. Those bits with Jimmy were hilarious!
Top