The last couple years have seen me getting into the habit of commissioning art jams -- that is, art pieces where each artist draws a different character in a group shot -- at conventions. In 2018, I had several artists at the local comic cons partner up to do a He-Man and the Masters of the Universe jam (since been inked and fully colored), and this year I had an 18-character Superman jam done (still in raw pencil stage). The artists who worked on both jams expressed an interest in doing a similar jam piece with Batman, so I've been trying to get the bare bones of that figured out before having a layout done for everyone to work from.

Due to the limits of my wallet and of time, I can only go with 20 villains, tops, plus Batman and Robin leaping down to attack them. The lineup I have in mind will be a mix and match of different male baddies from all over the mythos (some of the artists on the previous jams are sick of drawing female characters/cheesecake art), including a few from Batman '66. However, there are a few fine points I'm stuck on at the moment.

FIrst off, I'm undecided on which version of Mr. Freeze to use in the jam. Right now I have three possible costumes to choose from: his animated series look
https://scontent-ort2-1.xx.fbcdn.net/v/ ... e=5E434B24

Each of the three outfits has its own pluses and minuses, so I'm not sure which would be the best suit to use in an art jam, especially since I don't yet know who would be drawing him.

Second, I'm debating whether or not to have a vehicle for the bad guys as an element in the piece. In 1994, HR Giger designed a Batmobile for Batman Forever that was so extreme and unrecognizable that it was rejected instantly.
https://i2.wp.com/bloody-disgusting.com ... .jpg?ssl=1

I was thinking of having this rejected Batmobile repurposed as a ride for the villains that they could be standing on or around, but I don't know if it would take up too much space and/or distract from the characters. Even in a double-page spread -- which this jam will likely be -- I don't know if the Gigermobile would pose any problems for character placement or staging.

And finally...I don't know which Robin costume to go with. I know it's going to be Dick Grayson in the suit, but I can't decide what he'll be wearing. Should it be his original costume? The Neal Adams-designed suit he shares with Tim Drake in the cartoons and movies? An amalgamation of the two designs? i kinda think Dick's classic red vest would look good paired with the green pants and black boots of the Adams redesign, but it might be easier to just go with one of the established Robin suits and be done with it. Again, I'm kinda stuck.

Any suggestions you guys might have? I'd like to have this jam concept hammered down so I can get this thing going. I'm open to any recommendations y'all can offer.
Top

Personally, I don't think Freeze has ever looked better than he did in the suit Mike Mignola designed for the Animated Series:
https://www.pinterest.co.uk/pin/541980136385734872/

That design led me to purchase the action figure, which in turn led me to collect way too much of the line, even though I was supposedly "over" toys at that stage of my life.

Can't say I cared for the Kelly Jones design, which comes off more "robot" than "Freeze" to me. And the less said about the Arnold design, the better.

As for Robin, I dig the 90s Tim Drake look, or Neal Adam's earlier take from the 70s, which after one wear by "our" Dick Grayson eventually ended up on the Earth-2 Robin:
https://en.m.wikipedia.org/wiki/Robin_( ... arth_2.jpg

I guess it depends on what you're going for: Batman in all media? Best looks for each character?

That Giger design is awful. If the art's just for you, go for it, but I doubt 99% of year-end will know it's connection to the character, and no non-enthusiasts will.I

I'd love to see how the Superman jam turned out.

I've seen a LOT of Jam pieces over the years, if you want something that feels like a single illustration that is completely coherent find an artist to do pencil breakdowns, and then the artists have a skeleton to work on. It might also bring your overall cost down as the individual artists just have to finish a good breakdown.

I'd probably give the artists on each segment a choice of which version to put in there, some artists have preferences as to which version of a character they like.

I'm a fan of a lot of Giger's work, but that thing is atrocious.
Artist-Writer
http://WWW.ANDYTFISH.COM
Top

For context on the other jam pieces, here's the He-Man jam, which was completed 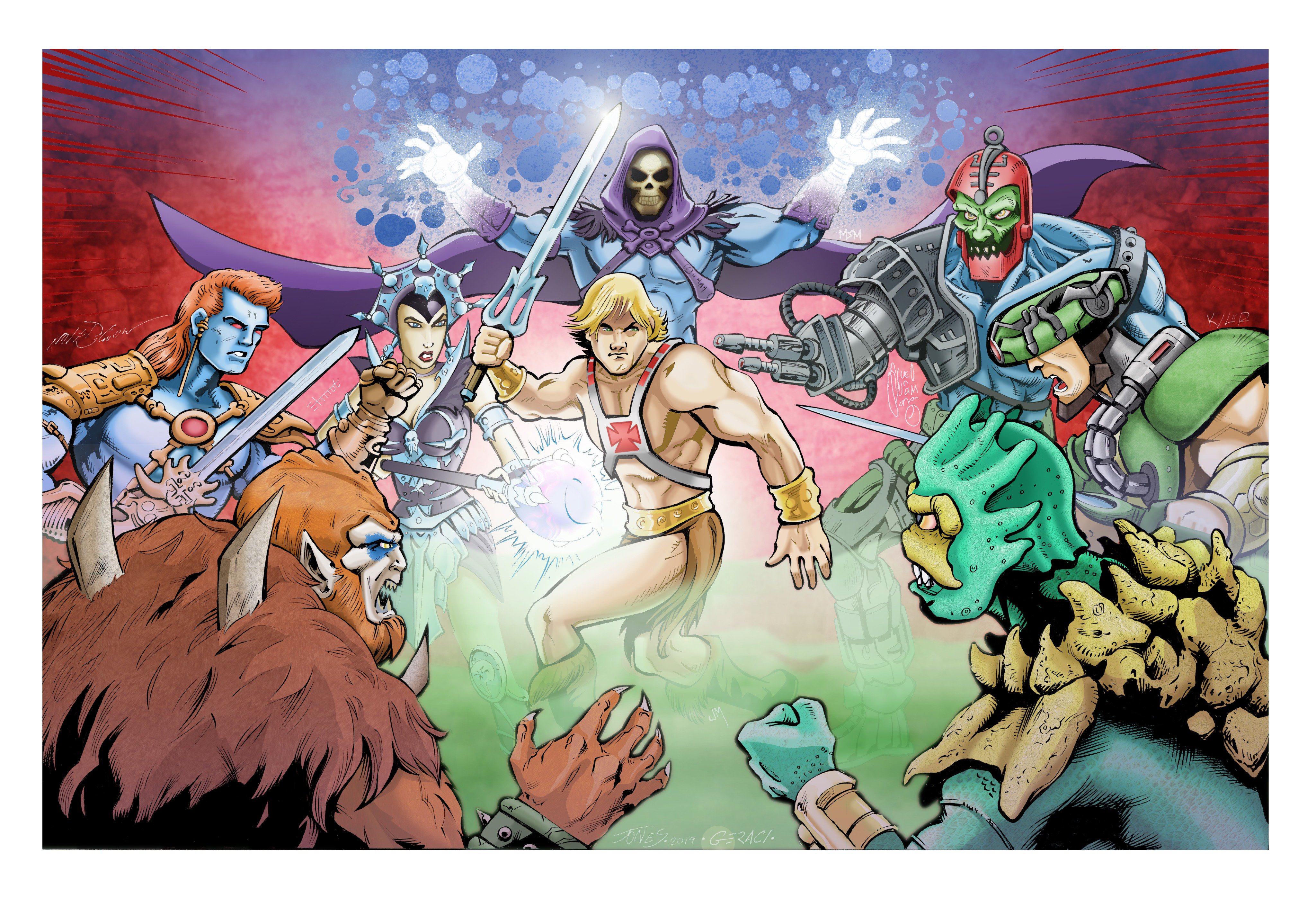 And here's the Superman jam, which is still in the raw pencil stage 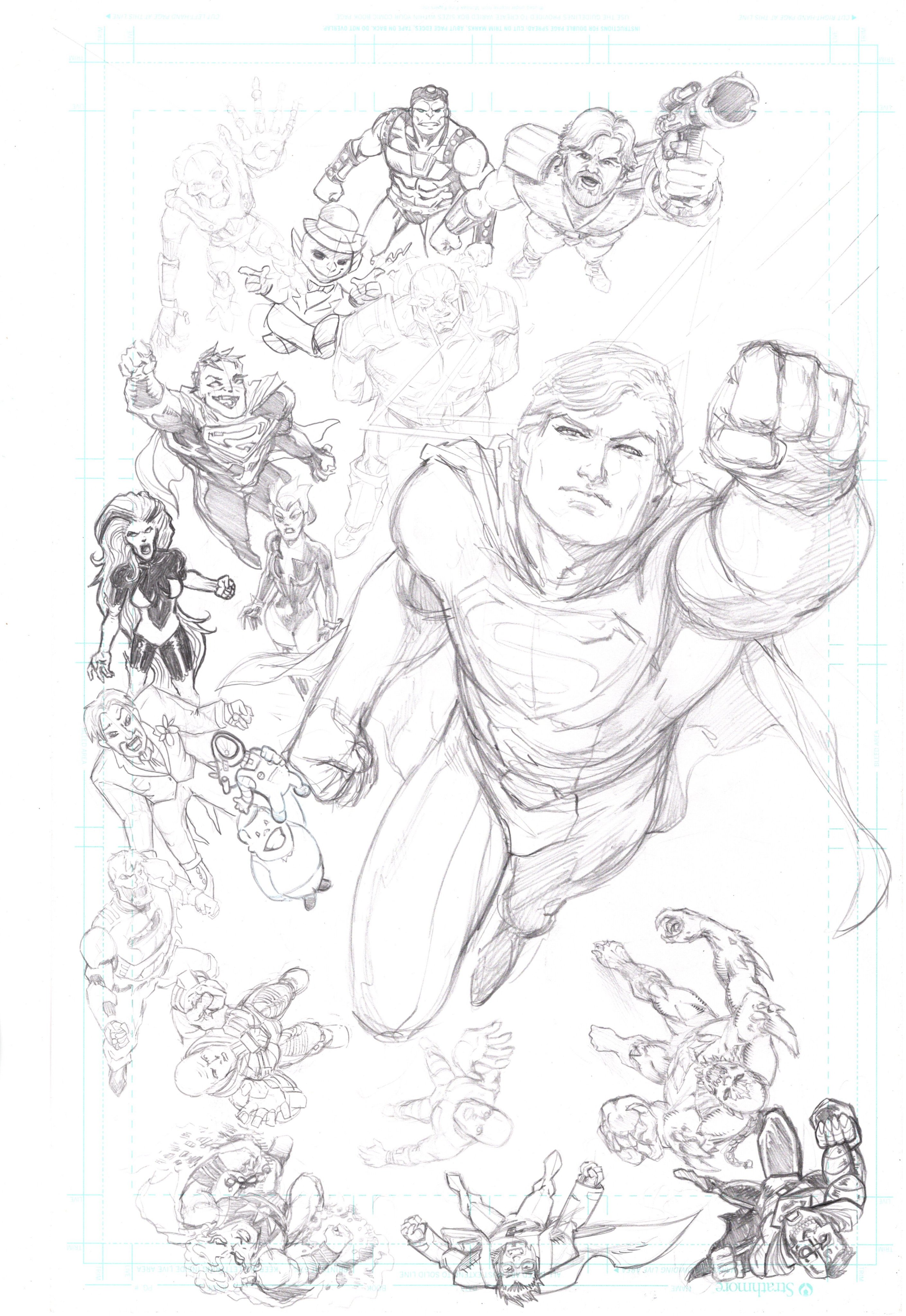 The way I've been having the jams done is this: one artist does the layout -- figure placement and basic staging -- and then draws in one of the characters to get it started. Following that, every character gets penciled in by a different artist. The He-Man jam was laid out by Jake Minor, who drew He-Man himself and had his brother Matt do Skeletor. (The third brother, Kevin, was the colorist on the final piece.) On the Superman jam, two artists partnered up on the layout because of the number of characters: Jason Westlake (who drew Brainiac) and Will Jones (who drew Darkseid and did Raqquill the Beast Man for the He-Man jam). DC and Marvel artist Drew Geraci was the inker on the He-Man jam, while Kingstone Comics inker and fellow Michigander Jason Moore will be inking the Superman jam once his schedule permits.

As far as the looks for each character go...most of them are going to be classic. I'm not going to be going gory, gross, or extreme like so many of the modern takes, simply because I like very, very little of the post-1986 Bat-stuff. The Joker, the Scarecrow, the Riddler, Bane, the Penguin, Man-Bat, Hugo Strange, Two-Face...all of them are going to be old-school comic book. Mad Hatter, Egghead, and King Tut are going to be straight out of Batman '66. But there's also going to be a few obscure baddies in the mix like Dr. Phosphorus, the Monk, and the Reaper, so there's going to be a mix and match of recognizable and minor. Really, I'm just trying to pin down which versions of certain characters are going to look the most impressive together in a group shot, whether it's their vintage looks or an updated version thereof. The He-Man and Superman jams were the same thing, picking and choosing what looked coolest and going with it. (Although with Tempus in the Superman jam, Scott Zambelli redesigned him to look more threatening than he ever did on Lois & Clark.)

With Batman himself, I already know what he's going to be wearing: gray and blue with the classic halo emblem. Most of the artists who've worked on the previous two jams want him in his iconic look as well, so that takes a lot of pressure off. And really, that's the vibe I'd like to go for with this: something where most eras of Batman get represented, but the overall feel is more timeless. It's also why I'm not only avoiding the gross-out, tasteless villains of the post-1986 comics, but also avoiding some of the goofier ones as well. Sadly, some of the vintage villains like Dr. Death, Dr. Daka, Dr. Tzin-Tzin, and the Wizard won't be included simply because of space limitations and cost. Maybe another time.

So yeah, that's about the size of it.
Top

Is Kurt Russell the model for Superman?
Artist-Writer
http://WWW.ANDYTFISH.COM
Top

I'm totally getting a Kurt Russel vibe there, too.

In fact, that might've been interesting to see on film.

Believe it or not, the resemblance to Kurt Russell was a total accident. Aldin "Buzz" Aw (Vampirella), who drew him for the jam, was originally trying for John Haymes Newton, the first of the two Salkind Superboys. But somehow, what came out in the final pencils was a young Russell instead...and everybody, including Buzz, was very happy with the end result. There was definitely a lot of speculation among everybody who worked on the jam as to what a Superman played by Russell might have been like.

It just ended up being one of those funny coincidences that worked out for the best.
Top

I'm feeling a bit of Curt Swan in some of those poses, especially Luthor and Doomsday.

Is that the redesigned Tempus at upper right, with what reminds me of my old disc-firing toy gun?

I see Nuclear Man made the party, too.

Is that the redesigned Tempus at upper right, with what reminds me of my old disc-firing toy gun?

I see Nuclear Man made the party, too.

That is indeed Tempus at upper right. His Lois & Clark counterpart just had an automatic pistol as a weapon...which wouldn't do much good unless he was packing kryptonite bullets. The reason he and Nuclear Man are in the jam is because I wanted to have a couple characters who represented very specific incarnations of Superman. Everyone else has has appeared in multiple iterations, whereas Tempus is exclusive to Lois & Clark and Nuclear Man represents the Christopher Reeve era. With that jam, it was all about including as many bad guys as possible to reference all the different incarnations.

With the Batman jam I'm planning, it's the opposite: narrowing down how many villains I can have done. There's just far too many in terms of sheer numbers, and a lot of the modern ones do nothing for me. Bane aside, I'm mostly going to be going to for vintage villains.
Top
Post Reply
9 posts • Page 1 of 1