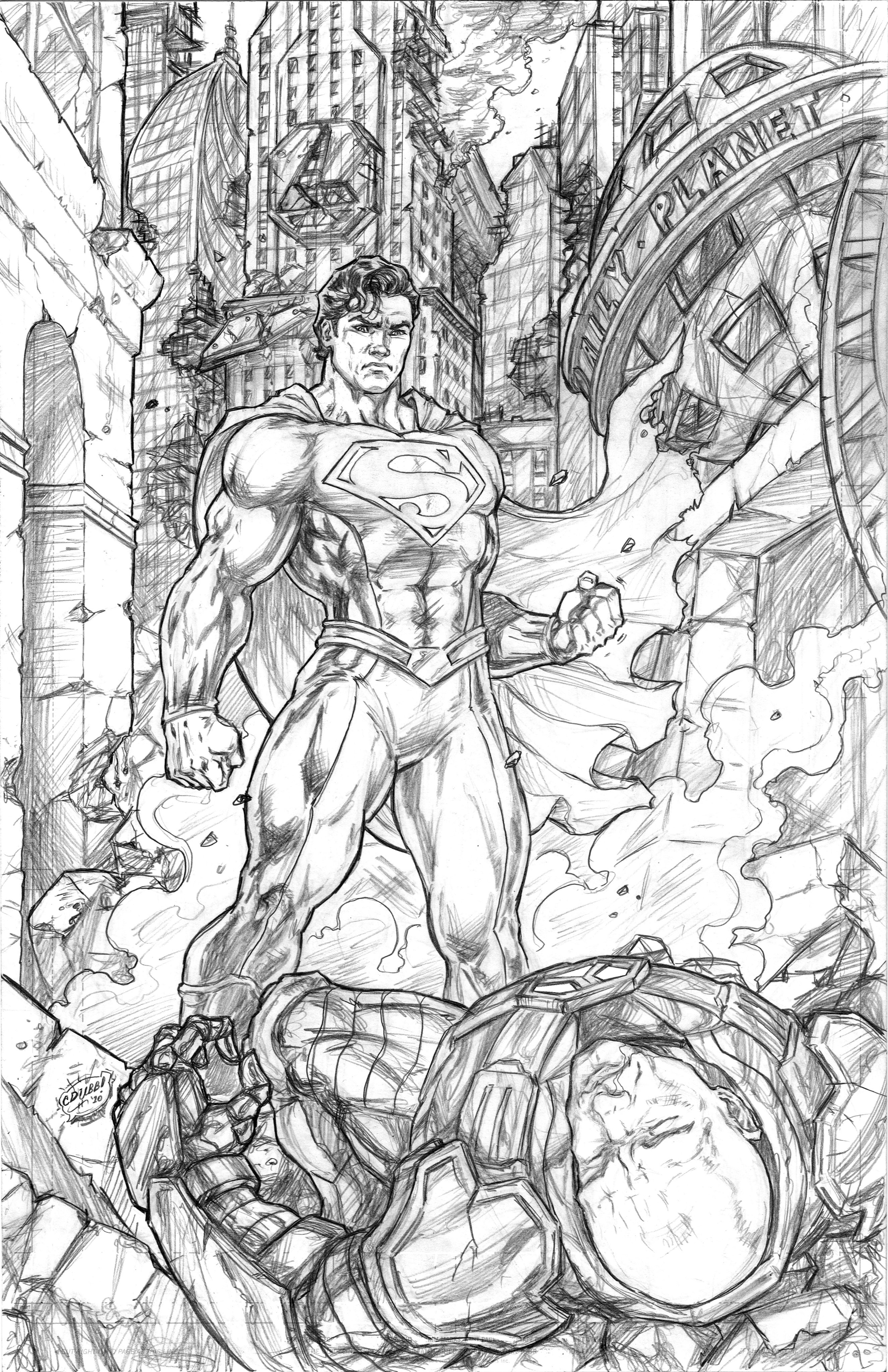 I'd had the pleasure of commissioning Chris Williams back in 2015 to do a Little Mermaid/Grease mashup (with his regular inker Jake Isenberg), and after seeing his art for the Marvel movies, I was interested in having him do a Superman piece. I'd also been wanting for some time to have a commission done of the Lois & Clark actors as if they'd been cast in a legitimately good Superman movie or TV show, with proper writing, costuming, and production values. So 2 + 2 = 4, and this was the end result.

One of my biggest pet peeves with Lois & Clark was how the show reduced John Shea's Lex Luthor to an evil Pepe Le Pew, obsessed with being Mr. Lois Lane to the exclusion of all else. (To my surprise and relief, Dean Cain disliked that decision, too.) Shea never got the opportunity to play Luthor as a full-blown comic book psychopath, so the idea behind this commission was to give him what I thought would have been a proper send-off...defeated after a full-scale comic book battle with Dean Cain's Superman. And while we were at it, since Cain never had a decent Supersuit, I had Williams suit Cain-Supes up in the excellent Pere Perez costume design from Smallville Season 11, which is probably my favorite Superman costume of all. (By the way, this is the same costume Kurt Russell-Superman wears in the big jam piece I posted in another thread.)

Add in a more juiced-up look for Metropolis -- wreckage caused by Luthor aside -- and everything came together nicely. I'll probably have this inked down the road, but for right now I'm pretty happy with this. And I dare say this would have made for a better end to Shea's Luthor than the frog-eating clone soap opera that sent the show into a death spiral.

Each to their own of course, but I must admit that I am both a fan of the L&C for what it was and also of the suit Dean wore once they settled on the final cape design mid-way through season one.

The artwork you've shared is cool in it's own right and definitely jam packed with some amazing detailed pencil work, but being totally honest - without your explanation of the differences in costume, I'm not seeing an obvious Cain/Shea likeness facially.
http://66batblog.tumblr.com
http://benbentleyphoto.com
Top

First, this is incredible art.
B. I remember Chain's Superman having slicked back hair, and Clark had more of the "loose" hair style.
#3. Amazing art.
@sdbatman66
@retrocoolnerd
https://www.youtube.com/channel/UCLfZhr ... K-KZxPt-gQ
Top

I can see hints of Cain...the vaguely "Asian" eyes, the nose, the long hair in back (so 90s!) but the suit confuses the issue. It's like if you put Indiana Jones in a hoodie and sweatpants...without the wardrobe to aid in recognition, there's no room for anything but perfection in the facial likeness. Thanks to batrunner1966 for pointing out the "slicked back hair" thing; I knew there was something not adding up for me. I remember thinking when the show aired that it was the first time in history that Superman got a worse hairdo than Clark Kent, but knowing it was because on that show, Clark was the more important character, with more screen time. In that sense, this is even more of a "dream project": what if Superman had Clark's cooler hair?

Since Shea wasn't bald on the show, since I don't remember him from any other projects and since his face is upside down, it's hard to say how close this take is.

That said, it's a great image of Superman and Lex in a generic sense, and the buildings and wreckage are well done (so many artists focus on "pin up" figures and never learn how to draw backgrounds, buildings, vehicles, etc). I'm not generally a fan of scenarios where Metropolis incurs heavy damage due to Superman's fights, but I do like images that tell a whole story in one frame. Also whether intentional or not, I like how Superman's expression seems to say, "Was this really necessary, Lex?" That fits my idea of Superman: he doesn't gloat or take pleasure in beating up his foes.

You're certainly amassing an interesting collection of commissioned works. If you're gonna collect, it might as well be a unique collection, full of one of a kind pieces.