"Where have you been, Scott?" A Video Message to the Board

Thank you for the video, Sir. Due to personal and professional obligations, I am no longer as active on the board as I once was, but I do like to check in from time to time. My Best to you, Mr. Sebring.
Top

Well spoken Scott. Still enjoy this Happy Place as our old friend used to call it.
You're Never Too Old to have a Happy Childhood
Top

Glad to see you are still alive and kicking old man (for the record, Scott is only about 3 months older than me, so any and all "jabs" are done in love, lol).

Now that we know where you've been, let me ask you, where have I been?

Since probably most of the current members have no idea who I am, I was the "Barney Fife" to Scott's "Andy Taylor" of this (and the previous) board up until about 8-10 years ago. I am still a member but am not around enough to really be much help with the day-to-day stuff anymore, which honestly Scott is more than capable to take care of by himself usually anyway. Ben was brought on to help us monitor things as the community grew to higher and higher numbers, and was and remains a great addition to the admin staff here. Running this place of fun is a lot of work, make no mistake, but as with any labor of love, it is necessary so that the community benefits the most. These men are your board leaders and do one heck of a job making sure that we all can visit and enjoy the board without incident.

Also, for those members new to me, I have been a proud, card-carrying member of this board since 1998, the board itself (original version) has been around since 1997. Woo hoo!

Without giving a history lesson here, before there was officially an "Off Topic Lounge" (Previous iterations of the board weren't furnished with this necessity), we the moderators used to spend more time we than wanted steering conversations back on track. Now with that said, the kind, yet smart-aleck side of my personality would do this with visual cues I created for (in my best Foghorn Leghorn voice) "just such an emergency". To give you an idea of what this looked like circa 2004-2005, here are some of those greatest hits of my "off topic alerts".

P.S., please keep in mind, this was before Scott was the owner/administrator and we were both just moderators for David's original board (which burst into flames about 15 years ago, I think). In fact, I might have started this BEFORE I was a moderator, so I guess I was a bit of a jerk back then (sorry everyone). For those who have watched the video above, Scott mentions Efrem Zimbalist Jr. and you'll notice I have included that alert here, being that it didn't see much time "in the holster" anyway. LOL.


The first and original Wom Wam (as they came to be called by the membership): 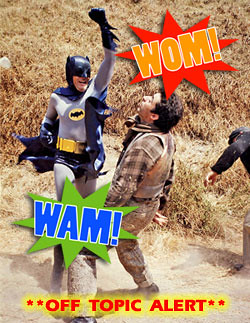 Which was closely followed by the "official" version: 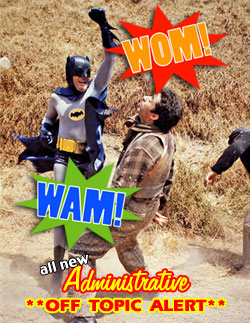 And a host of others: 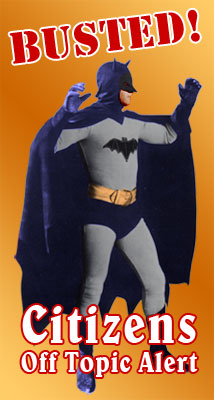 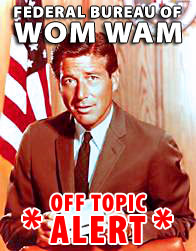 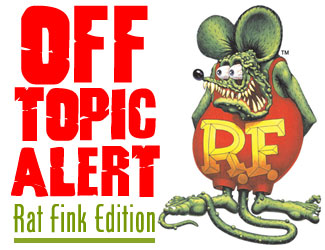 And last but certainly not least, myself with a Wally Cowl jammed onto my noggin (that photo was taken in the now-famous "Chaney Room" in Planet Wallywood oh-so-many years ago). 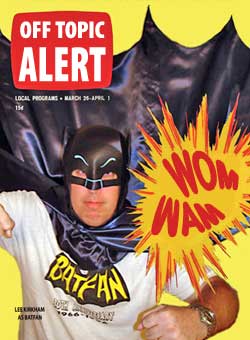 Ahhh memories. WomWam was coined due to a former member by that username who could not stay on topic for their life and often tried to start new off topics within any given thread.

Glad to see things are well with you Scott, I still enjoy this board, made some great friends here! I tend to be more of a lurker lately, but have some stuff that I am working on that I will be posting about soon.
Top

I just watched your video buddy.
Boy I need to get on here more. I didn’t know you retired suiting up. I was wondering why you didn’t do Burt’s Hollywood Star. I have retired myself. I happy your still here.
Take care buddy.
Top
Post Reply
21 posts