Back around 1977, I recall an ad for a Batman toy I’ve never seen or heard mentioned since. I think it was advertised in this issue: https://dc.fandom.com/wiki/Batman_Vol_1_290. If it wasn’t that issue, it was the one before or after.

The ad art looked amazing! Batman had this blue device on his wrist with a bat symbol button that shot out a grappling hook. I ordered the toy from the comic book.

Before it arrived, I saw it on the racks at Kmart and bought it. Talk about deceptive advertising! I was expecting this big plastic thing, and it was only a wristwatch sized cheap spring shooter that shot a little plastic fishhook sized claw with some yellow nylon line tied to it.

It was as lame as could be, ha ha! When the one I’d ordered from the comic book came, I think I just put it in a drawer and forgot about it.


Fast forward to today...I can’t find a picture of this stupid thing nor any evidence it ever existed! Oh no! The Mandela Effect!!! I guess I could buy those issues and look thru them. Nah, one of you guys has got to have a picture of it.

Ok, I found some adverts but no photo of the actual piece of junk toy. At least I found proof of its existence! 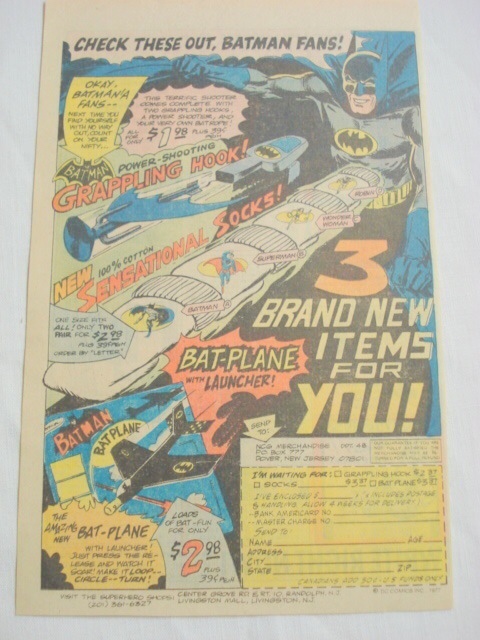 This is funny...stand down, guys. I finally found it on my own! Thanks for nothing!! It is hilarious what a P.O.S. the thing was...now I need to find one, for no explicable reason!
Top

Interesting. Never saw one back in the day. Just checked eBay and nothing listed right now. Keep looking.
Top

Spider-Man is contacting his lawyers as we post.
To the Bat-Elephant!!
Top

Heh, I had the Spider-Man version.
Top

The ad art is by the Joe Kubert school-- might be Kubert himself-- that's great stuff.
The card art is by Ernie Chan one of the Batman artists of the day-- which is pretty cool in itself, they don't often use the current artists for marketing it's usually a house style.
Artist-Writer
http://WWW.ANDYTFISH.COM
Top

I had the Spidey as well. Wish I still had it...
Top

I had everything on that page except for the Batman wrist shooter. I never saw an actual photograph of it until now. Thanks
Top

I had the Spider-man one back around 1975. Never saw the Batman one before. The Spidey one even had a TV commercial for it.

Maybe I was a little harsh. When I was 12, I was a little disappointed. However, I noted it was made by AHI I think that’s Azrak Hamway International, which is related to Mego. I am a huge Mego fan, Action Jackson fan, and Worlds Greatest Superheroes fan! For me, Mego Batman and Robin go with the Adam West TV show and the Filmation show.

The toy...ha ha. It’s something that would be affixed to a 12” action figure nowadays. I saw that little string...ha ha! I thought I could climb buildings with it, but hey...I was what...12? I find it funny.

BTW, the Batman comics from 1977 were awesome! I recall there was a mini Batman revival around that time and the TV show was on after school. I had a stack of Batman comics. IMO, the artwork from the ‘70s was far superior to Frank Miller’s famous Dark Knight Returns series, but I’ve come to love Miller’s take on Batman. FWIW...
Top

Oh...you reminded me of something else. Around ‘77, the Sears catalog had an RC Batmobile and RC Spider-Man car. I got the Batmobile, my brother got the Spider-car. Mine worked, his didn’t ...sorry, Johnny! The spider car just sat there with the motor running inside. I think Dad found a screw came loose inside and fixed it. ...good stuff. I think I wore the Batmobile out. I don’t know what appened to all the stuff I had, but I digress.... 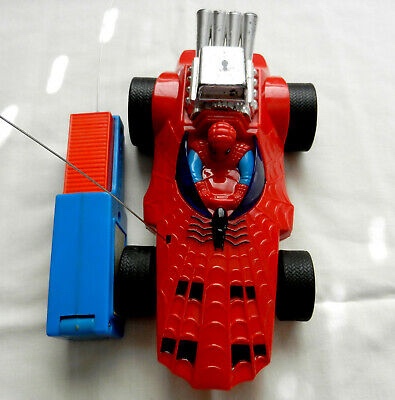 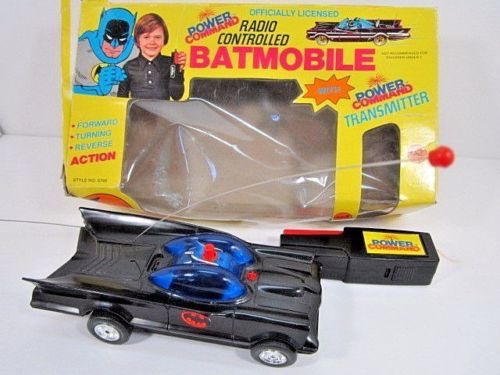 I think the literal Joe Kubert School (the art-instruction institution, which probably had/has a different name than that) may have contracted to do commercial work as a way of giving students practical experience. The Heroes World catalogs of the mid-to-late 70s, which featured superhero-related toys, T-shirts and the like and often had greater page counts than standard comics, were all illustrated like these ads, in a clearly Kubert-esque style. Maybe Joe did all the work himself (I don't think he was doing a ton for DC in those years), but I have a lingering impression there was student artwork in it too. (Maybe I read it in the catalogs back in the day; I no longer have any to check.)
Top
Post Reply
23 posts