I was thinking Adams or Marshall Rogers. How big is it?
Artist-Writer
http://WWW.ANDYTFISH.COM
Top

SprangFan wrote: ↑
Sun Jan 05, 2020 11:26 am
Not sure why he's in combat mode in the Batcave, but I'm getting an awesome Neal Adams vibe off that second one. Are they pricey?

It doesn't specifically say Adams on the packaging, but it has one of his drawings on the inside flap, although it from Odyssey and not the Bronze Age. It was a Gamestop exclusive released in 2018, from what I found online. I think my local store just had one left over. It was on the top shelf and I almost overlooked it.

The other statue has Jim Lee's name on the box. It is available on Gamestop's website if you don't live close to one.

It is about the same size as Diamond Select statues are. I don't know the exact measurements, but that should give you an idea. I like how it has a flap that opens so you can see the statue from three different angles if you leave it in the box.

This was only my second time going into Gamestop, since I didn't realize they sold toys, and I'm not a gamer.
Top

Thanks- not a gamer either.
Found one on Bonanza for $70 ~. From the angle there it looks like Jim Aparo’s work.
Neat item.
Artist-Writer
http://WWW.ANDYTFISH.COM
Top

Can't go wrong with Aparo either, but from that photo it looks more "Adams" than any figure or statue to date that's actually had "Neal Adams Batman" on the label. Either way a strong Bronze Age vibe. Thumbs up from me, though I don't have room for more statues.

I've only been in Gamestop a couple of times. I didn't realize they sold toys. I did pick up these two Batman statues while I was there.

Yes, the old joke lately is that GameStop is more of a toy store than a video game store. Many are speculating that they're going out of business this year.
Music. BAT! Music.
Top

Hey there,
I haven't posted in a dog's age!
I got the Bradford Exchange Snow globe this week!

The extra-long ears and narrow face are almost inching us into Wrightson territory. But however you slice it, very Bronze Age. I wish there were more items with a BA vibe to them, which means not just the traditional colors but also a physique that says "athlete" instead of "steroid junkie".

Not sure I'm crazy about all the airbrushed "shading", though...


I got the Bradford Exchange Snow globe this week!

That actually came out pretty well.

All right so Wrightson inked by Aparo then!

Aparo, of whom I was a big fan, always overpowered his penciler on the rare occasion that he inked someone's work. Shockingly (sarcasm) I agree with Sprang, I love the athlete version of Batman and I find the ridiculously muscled version laughable. It's gotten to the point that he looks like he's in one of those dog attack training suits now.

That snow globe rocks! Wow! I like that it looks more like the opening cartoon than the actual show as it was originally advertisted. I have zero room for any more things but this might be a find room for it situation.
Artist-Writer
http://WWW.ANDYTFISH.COM
Top

Aparo, of whom I was a big fan, always overpowered his penciler on the rare occasion that he inked someone's work.

I only remember him inking John Byrne on the first issue of the "Untold Legend of The Batman," but yes, he did overpower the pencils, there. That being said, I thought they made a good pairing and was always disappointed they didn't collaborate on the remaining two issues.

As a lad, I considered Aparo a second fiddle to Neal Adams, but if you consider the quality of work Aparo did, and in much, much, much greater quantity than Adams, maybe Jim should get the nod as the #1 artist of Batman's Bronze Age (he even did all his own lettering!).

On the other hand, something happened in the late 70s where Aparo's art got much looser and more "cartoony" and he kind of lost me.

By the time of "Knightfall", he was being inked by others, with IMHO disappointing results. At that point, I kind of moved on. 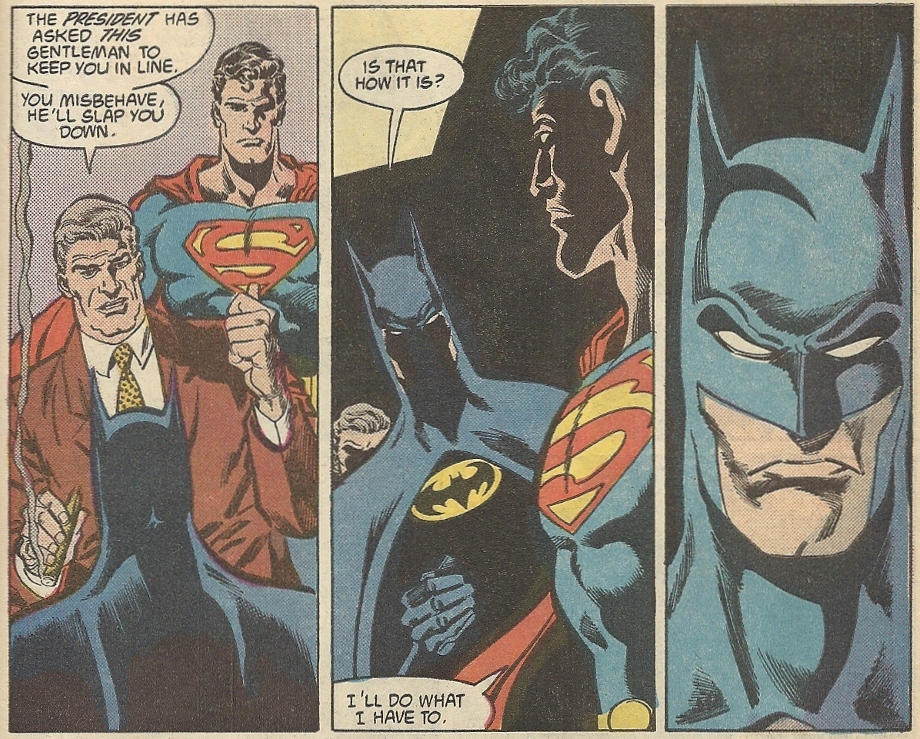 But that early work, and before that his stuff on Charlton's "Phantom," was primo.

Aparo's early work bested Adams IMO because he had both realism as well as more dynamic styling as your first illustration shows.
Agree 1,000,000% that as the 80s crept in his style got far too simple to the point that it looked like clip art being used over and over again. I suspect, and have zero evidence to support it, that Aparo was using an inker in his early work-- much more shadowy, much more aware of form, and then let that person go. There were a lot of ghosts working in CT around his prime period. Or the reverse could be true. My suspicion comes from a conversation I had with him late in his career where he mentioned he enjoyed collaborating much more than doing all the work himself. I didn't know if he was referencing current work or that of the past. But the two styles are different enough that it warrants thought.

Regardless, Aparo's last really good work was in BATMAN FAMILY #17 which is 1978 or 1979-- the ink still showed form but it had lost of lot of the life of his earlier work. Past this and the art looked overlit with very little shadow.

I really like that!
Some days you just can't get rid of a ... SHARK!
Top

That's an interesting idea about a possible uncredited collaborator. I used to wonder if the sudden shift in style was due to some kind of health event, or just age, but it wasn't a gradual decline, more like another Jim Aparo overnight replaced the first, and went on for years. (Insert McCartney-esque conspiracy theory here).

I think it's possible Aparo just decided he couldn't go on producing such detailed pencils and inking them, too, if he was going to churn out enough pages to pay the bills. Or maybe he just got more assured with his inks. Either way maybe he just switched to looser, less defined pencils and figured he could do most of the "drawing" in ink, speeding up the overall process. But most artists are more cautious working with ink, so things got stiffer, safer and less dynamic. And those loose pencils fared even more poorly under an inner like Mike DeCarlo.

It'll have to remain an unsolved mystery, I guess. Even when he was still alive, there would have been no polite way to ask, "So why was your old stuff so much better?". Cool that you got to talk to him, though.

Sorry to derail the thread, folks.

Is the thread derailed? So many members of the Batboard seem to be focused on Facebook-- since I'm not there and never will be I look forward to some life here.

I think your theory makes sense too-- without detailed pencils you end up with lesser results, so that may be it too. It is an impossible conversation to say "Hey, Mr Aparo-- big fan! Of course your earlier stuff was so much better-- what happened??"

Derailing further-- I had a similar event with Bernie Wrightson-- one of my other favorite artists. His version of Batman was rare to see up until the 90s or so, pretty much SWAMP THING #7 which I thought was absolutely brilliant work even with the insane ears-- loved it. When they announced he was coming back for a limited Batman series in 1988 called THE CULT I was so pumped for it-- but when I actually saw it I was disappointed in the artwork-- it was still very good but it lacked the beautiful inks of his earlier work. A lot of that was because at the time of SWAMP THING he was very close with Mike Kaluta, Walter Simonson, Howard Chaykin, Jeffrey (later Catherine) Jones and Barry Windsor Smith later with some of them forming the co-op art space The Studio-- and many times they would pitch in to ink each other's work, so that might have accounted for the stronger and smoother ink lines.

Talking to Bernie and Mike Kaluta I was looking at some of Bernie's originals and he came out and said he was disappointed in his work since his accident-- it's been reported that he was in a car accident but he told me there that he had slipped and fallen on some ice and landed on his hands creating nerve damage that affected his grip. 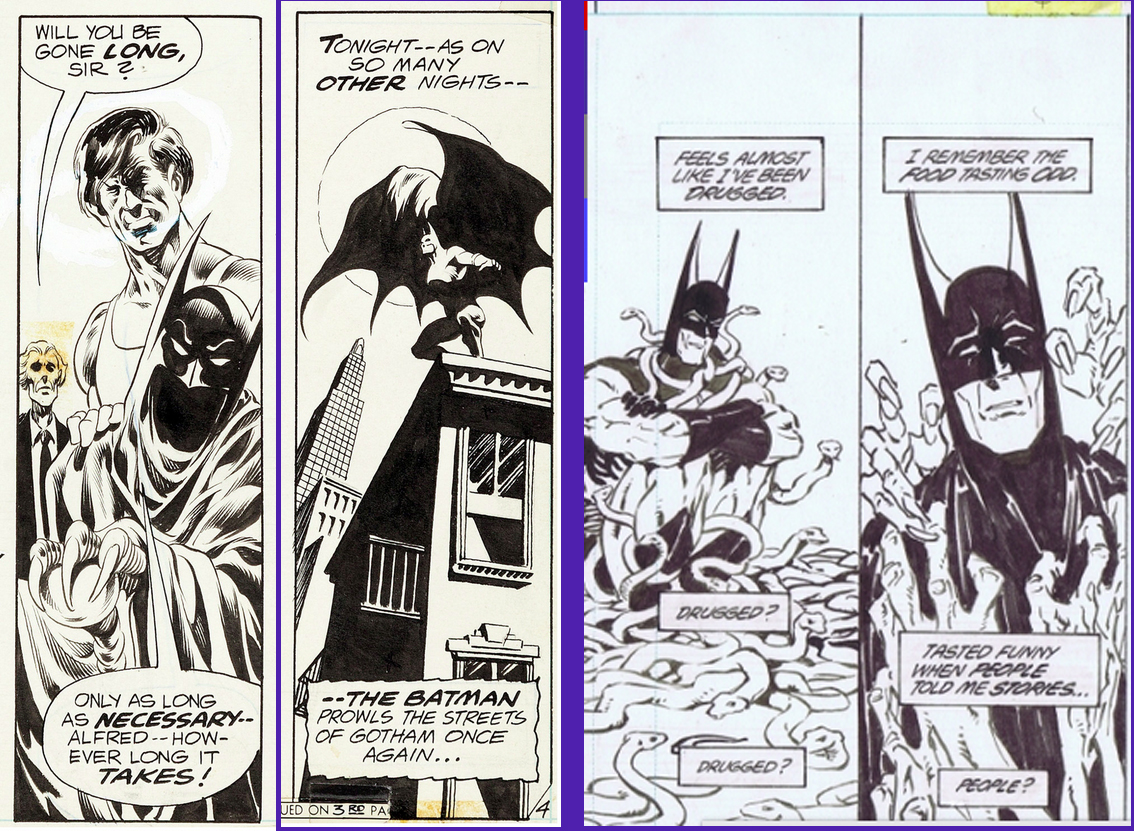 Prime Wrightson from SWAMP THING #7 on the left-- his later work on THE CULT on the right.
Artist-Writer
http://WWW.ANDYTFISH.COM
Top

SprangFan wrote: ↑
Mon Jan 06, 2020 12:45 pm
As a lad, I considered Aparo a second fiddle to Neal Adams, but if you consider the quality of work Aparo did, and in much, much, much greater quantity than Adams, maybe Jim should get the nod as the #1 artist of Batman's Bronze Age (he even did all his own lettering!).

Quantity does not matter when giving anyone the #1 artist title of Batman's Bronze Age. As much as I love Aparo's work (even back at Charlton), he did not revolutionize the language of comic art--Batman art like Adams. Adams not only had a unique mastery of anatomy (something that troubled so many comic artists) but had a photographer's eye/mind which allowed Batman to take advantage of the physically dynamic acrobat/martial artist and explore his more mysterious side, as a figure of the night as he was meant to be, instead of a one-two-punch guy in a stiff costume.

There's no way to measure how much of an impact Adams had on Batman, but his work was as synonymous with the character as Romita's was to Spider-Man, Kirby's to the Fantastic Four or Kubert to Sgt. Rock. In other words, defining and inseparable from the artist.
Beneath Wayne Manor
Top
Post Reply
1976 posts