TO THE BATPOLES #127: It’s a “Challenge” Just to Sit Through “Legends”

The Spiderman live action series has never gotten its proper due IMO. I really wish though they'd kept Joanna "Isis" Cameron who was great in the two part "Deadly Dust" episode.

Although the episodes that were combined into syndicated two hour movies were released on VHS, the show has never had a DVD release amazingly.
Top

Tim and Paul, you really should look into the Toei Spider-Man series from the 70's. Grounded in traditional tokusatsu, the greatest superhero show ever done (well, featuring DC/Marvel characters at least). The stuntman alone that played Spider-Man took incredible risks and the action is amazing.
He flies and fights-BATMAN!
Purity and virtue-BATMAN!
Cowards run away!
Batman saves the day!
Also, Boy Wonder Robin.
Batman and Robin-caped crusaders at night!
BIFF! POW! BAM! BATMAN!
Top

Also, as to why the show was put into production, it probably was because Superman The Movie was released in December of 1978. Legends was probably put into production by DC and TV execs hoping to cash in on the hype and 'ride the wave' surrounding that release, using their other heroes. The timing (being released in January of 1979, just a month or so after Superman's release) of the release couldn't have been a coincidence. Just like how when GINO (Godzilla In Name Only, the 1998 American Godzilla) was released the TV movie Gargantua (another giant monster movie) premiered the same night Godzilla did.
He flies and fights-BATMAN!
Purity and virtue-BATMAN!
Cowards run away!
Batman saves the day!
Also, Boy Wonder Robin.
Batman and Robin-caped crusaders at night!
BIFF! POW! BAM! BATMAN!
Top

Nice job, guys. This certainly was the quintessential 'taking one for the team.'

At the time, I was unaware of the first, uh, 'special,' but knew of the second one, probably because I already was used to the roast format. I think I tuned in and bailed pretty quickly. I suspect if Newmar had been involved I might have watched a bit more (Holy Dirty Young Man Market!).

And yeah, the comics/superhero TV market wasn't doing well. I actually had watched when CBS dumped the busted pilot for Dr. Strange in early Sept. 1978, and was impressed by the performance of Jessica Walter (see HDYMM) as the main baddie. The problem was she was way more compelling than the zero of a hero.

And despite the obvious draw of Lynda Carter, Wonder Woman had become quite tired by season 3. I understand the Nazi plotline was rough from a budgetary standpoint with the period costumes, cars, etc., but the modern-era WW never felt right. Especially by season 3, Diana Prince basically was a glamorous secret agent with designer fashions, designer eyeglasses, a chic ponytail, oh and 2 or 3 times an episode she would spin and turn into the *slightly* more glamorous Wonder Woman and square off against some lame season 3 type Bat-villain and toss a couple of his/her henchmen into a pile of empty cardboard boxes. Whoopee!
'I thought Siren was perfect for Joan.'--Stanley Ralph Ross, writer of 'The Wail of the Siren'

I was a huge fan of the Nicholas Hammond show when I was a kid-- never missed it. Sadly, it doesn't hold up for me. I get the concept of keeping things 'real' but it lacked the humour of the comics and it really could have used a decent super villain. Hammond was a guest here in Boston at the same venue that the great 66BATMAN MESSAGE BOARD live action event took place at oh so many years ago. I gave the show a quick pass through but the crowds were so big I not only couldn't get an autograph I couldn't find him.

My favourite live action version of Spider-Man remains the 1978 Japanese Version, made at the same time as the Hammond Show-- it's part Spider-Man part Power Rangers (and it's actually the inspiration for Power Rangers) but best of all it's fun unless you're someone who can't stand tweaking a character's backstory. 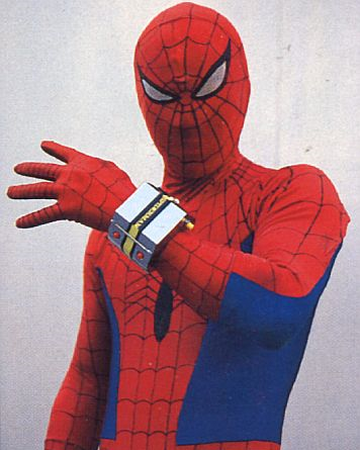 And speaking of tweaking, the CAPTAIN AMERICA Serial (1944) is one of the highest regarded among serial devotees, but if you're looking for anything related to Captain America you're in the same ballpark as Japanese Spider-Man-- that is; none.

The reason is that originally Republic Pictures was making a serial for the comic character Mr Scarlet and then at the last minute switched to Captain America, rather than coming up with a new script to match they just went ahead with that they already had. They did the same thing when the fumbled the rights to SUPERMAN and instead turned that serial into MYSTERIOUS DR SATAN (1940) and ADVENTURES OF CAPTAIN MARVEL (1941) << which is the first live action superhero ever, and IMO the best serial of all time.

Back on topic, Adam and Fred told me the plan with these HB produced specials was to make them a regular series if they took off, which thankfully they did not. I think if you have a VERY young child and you want to introduce Superheroes to them the first special isn't a bad pick.
Artist-Writer
http://WWW.ANDYTFISH.COM
Top

"We'll be right there, Commissioner. Robin is just vacuuming lint off the Batmobile."
"Holy nostalgia, Batman!"
Therin of Andor

Haven't been able to get on in a while. Most people have already covered what I thought.

I remember being highly disappointed with the show when it originally aired. The laugh track bothered me. I didn't like that my comic book heroes were being mocked. Now, I'd be ok with it if the show was funny, but it wasn't.

As I've mentioned, I got into Batman via reruns of the show in 1976-1977, but the station that showed Batman took it off the schedule, so this was the first live action Batman I got to see since then. Sure, it is only two years, but that seems like a lifetime when you're a kid. I didn't get to see the "real" 1966 show again until 1982.

Since in Comics Continuity at the time, the Huntress was the daughter of the Earth 2 Batman and Catwoman. I'm surprised we didn't get a lame family sitcom with Catwoman and Batman dealing with the trauma of their daughter wanting to be a crimefighter. Still, could that have been any worse than what we got?

Tim and Paul, I didn't realize you guys were pretty much "Marvel only" as comics fan. You need to read the Englehart/Simonson/Milgrom/Rogers/Austin run ASAP. Sorry to get off topic, but does that mean you guys haven't read the Wein/Wrightson/Redondo Swamp Thing issues, either?
Top

gothosmansion: I've read a few of the Wein/Wrightson Swampi stories and own reprints of the Englehart/Rogers DETECTIVE run (the highlights, anyway), but we are moving into post-'66 BATMAN/DETECTIVE as a podcast topic right now, so I'll finally crack those reprints open! I know, I know, we're just a teensy bit late to that party...
Top

P “Junior Batman” Y wrote: ↑Tue Jan 21, 2020 10:48 am gothosmansion: I've read a few of the Wein/Wrightson Swampi stories and own reprints of the Englehart/Rogers DETECTIVE run (the highlights, anyway), but we are moving into post-'66 BATMAN/DETECTIVE as a podcast topic right now, so I'll finally crack those reprints open! I know, I know, we're just a teensy bit late to that party...

I wasn't casting any aspersions. I might even be a little jealous at the thrill of discovery that is awaiting you on some of these.

If you don't have the entire Englehart/Simonson/Milgrom/Rogers/Austin run, you can pick up reprints pretty cheaply in the Shadow of the Batman Baxter series from the 1980s. It is best to read it as one long story.
Top

That’s exactly the reprint set I’ve got!! Didn’t realize it was complete, which makes the news all the better.

Weren't these specials produced during Fred Silverman's tenure at NBC? It seems he tried reviving any property that he could get his hands on to get the network out of the ratings basement: Gilligan's Island, the Munsters, the Brady Bunch (Brides), even the Flintstones, so why not Batman? I watched both of the specials when they originally aired, and, like the others, was disappointed in the execution. Just seeing what had become of the Batmobile horrified me. At the ripe old age of 13, I felt that not only was my childhood slipping away, but so was my affinity for these properties. Thankfully, a few months later, I saw Superman: The Movie and realized that my fascination with fantasy and the superhero genre was as strong as ever!
Top

Listened to the podcast and played a drinking game for every "um" said and was hospitalized forty seconds into the podcast. Guys, cut the ums.
Artist-Writer
http://WWW.ANDYTFISH.COM
Top

AndyFish wrote: ↑Tue Jan 28, 2020 1:14 pm Listened to the podcast and played a drinking game for every "um" said and was hospitalized forty seconds into the podcast. Guys, cut the ums.

AndyFish wrote: ↑Tue Jan 28, 2020 1:14 pm Listened to the podcast and played a drinking game for every "um" said and was hospitalized forty seconds into the podcast. Guys, cut the ums.

I probably have listened to all but 2 or 3 of their podcasts and it never has struck me as a problem. I find 'you knows' more of a turnoff anyway. Just one listener's .02.
'I thought Siren was perfect for Joan.'--Stanley Ralph Ross, writer of 'The Wail of the Siren'

'She had a devastating, hypnotic effect on all the men.'--A schoolmate describing Joan Collins at age 17
Top
Post Reply
30 posts