TO THE BATPOLES podcast #105: Fifty Ways to Wreck the Joker

TO THE BATPOLES podcast #105: Fifty Ways to Wreck the Joker In the Funny Feline Felonies, Joker fakes getting kidnapped by Catwoman, only to then let her lead him around by the nose. He seems more childish than evil. What's wrong with season three Joker? That's one issue on our minds as we go through this two-parter. We also explore the provenance of the "Kitty Car," the ways in which this arc displays both male chauvinism and feminism, and the numerous extra characters and cameos that Stanley Ralph Ross included in this script — and an important cameo that all the other bat-commentators have missed!

Also, a close look at Warden Crichton's office, the Los Straitjackets version of the Batman theme, and your mail!

High C alerted me to the production error in this episode, and I've just uploaded a corrected version! If you delete and re-download the podcast, you should be good. Sorry for the messup!
Top

Fifty ways to wreck the Joker? Obviously this way was, 'Make a new plan, Stan (Ross)'
'I thought Siren was perfect for Joan.'--Stanley Ralph Ross, writer of 'The Wail of the Siren'

Water does indeed begin to expand at lower temperatures, at about 4 C, and when it freezes at 0 C expands significantly. One of the few forms of matter exhibiting this behavior. Short reason, because water is a network-forming matter and the bonds between its hydrogen atoms become more pronounced at these lower temps and the molecule's structure becomes more open. So maybe that sprinkler system just uses really cold water

. It is more likely though that the water causes a reaction with the cat's whiskers-water can cause loss of strength in some ropes, just like hot water can cause fabric shrinkage instead of expansion (which is no doubt where they got the idea that heat makes the cat's whiskers contract). Or simply the 'logic' of Gotham City Science where decibel levels that would destroy the universe with change left over are seen.

And yes, you still have at least one female listener, one that's just really really busy these days

As cool as it was to see the Joker, he was only there to follow the Season 3 rule of every multi-parter has to be a villain team-up. The only thing he really contributed was the lethal Joker buzzer trap and an extra man in the battlefield. I'm also guessing it's because Joker is a popular Batvillain and without these episodes, he would've only been in two episodes not including the stunt double in the Dr. Cassandra episode.
Top

You guys made some excellent observations about this one. The Joker and Batman both were dumbed-down big-time. Joel Eisner talked about Joker's deterioration in his book and in the To The Batpoles blog that, I am fairly certain, is not affiliated with your podcast. However, he saw the transition beginning with the pop art parody and I'm sure you two would disagree.

I think part of the problem with the Joker's characterization is you had people writing characters out of their comfort zone. I don't think it's a coincidence that SRR wrote Joker poorly and Stanford Sherman wrote Egghead poorly. I know writers should be more flexible, but these guys perhaps weren't as much as they should've been. To be fair, if I time traveled back to 1966-67, I'd probably write Siren better than I could write Clock King, for instance.

GREAT point about both the Sleazy Hotel and Knab's penthouse being across the street. A strange neighborhood, indeed. It reminded me of the climactic scene in Wail of The Siren in which there is a 'HOTEL' sign visible on the rooftop. So I guess the Wayne Foundation building is next to a fleabag hotel...

I think the writing of Batgirl again is bad. As you guys noted, her stealing evidence has to do with the Greenway writers believing women only want to one-up men. I mean, put it this way--Batgirl names herself after Batman and imitates his methods, costume, etc. Shouldn't she have been written more as an apprentice wanting to learn from the sensei, as opposed to a glory hound trying to solve crimes before he does??

That said, Paul made a good point about Yvonne not delivering the 'tea leaves' line sarcastically enough. She delivered it coquettishly, IMO, and that wasn't the correct line reading.

Some quick hits: Again, Paul's impression of henpecked Egghead was spot-on. ... I liked Paul calling it the Hotel du Sleaze. ... 'Policewoman Mooney' was a female GCPD cop seen prior to Nora Clavicle. ... The Gilligan's Island mind-switching ep was in season 2, not 3. It featured Vito Scotti, of course. ... I agree about how Eartha should've been first in the credits given how her character is the driving force, but perhaps they deferred to Cesar because of seniority. They both were paid the same, I know that.

And finally, the Little Louie Groovy wig apparently was yet another 'darling' of Ross'. Board member 'irishmiss,' on a previous incarnation of the board, posted a recap of the original draft script for the Catwoman 'voice eraser' arc. Before Chad and Jeremy came on board, the musical act was a fictitious Beatles-esque foursome. IIRC, one of them took off his 'moptop' wig and was partially or completely bald...
'I thought Siren was perfect for Joan.'--Stanley Ralph Ross, writer of 'The Wail of the Siren'

I enjoyed your show guys, but, since the next episode covers the script, aren't you torturing yourselves by covering the Joker/Catwoman team-up two episodes in a row?

I hadn't even thought about Batman interviewing the jury members. With the near-encyclopedic recall he had on earlier episodes, how could Batman not spot that they were former crooks?

I hate that Batman was stupid enough to fall for Joker's handshake trap, but at least it gave Batgirl a chance to rescue Batman & Robin, since she was so often the damsel in distress. Generally, I would like for all the heroes to rescue themselves instead of having to depend on someone else, so it was nice to see Batgirl rescue herself from the contracting twine trap.

I figures Cesar got top billing because he was already popular in his role as the Joker. Since this would have been Eartha Kitt's Catwoman debut, if aired as shot, the producers had no idea how viewers would react to her. Also, since Cesar was one of only three villainous actors to return for all three seasons, his loyalty should have been rewarded with top billing.
Top

You would have thought Dozier learned a lesson that villain team-ups were not such a grand idea, since the movie--with four of the Rogue's Gallery--failed to be a runaway hit with audiences. While there were other factors leading to the disappointing performance of the movie, the big hook--the first time the biggest Bat-villains teamed-up--was anything but a smashing success.

Regarding The Reactor car, in the Bewitched episode, Darrin said the car "makes the Batmobile look like a skateboard!". So I guess referring to the Batmobile--at the time when its best known for its use on the TV series--meant *sniff-sniff* Batman was just a TV series??

While the Greenway crew turned the Reactor into a preschool craft project with the giant tail, eyes, and ears, Filmation--obviously inspired by the Reactor--created their own cat-car for 1968's The Adventures of Batman but integrated cat features to an arguably more successful degree: 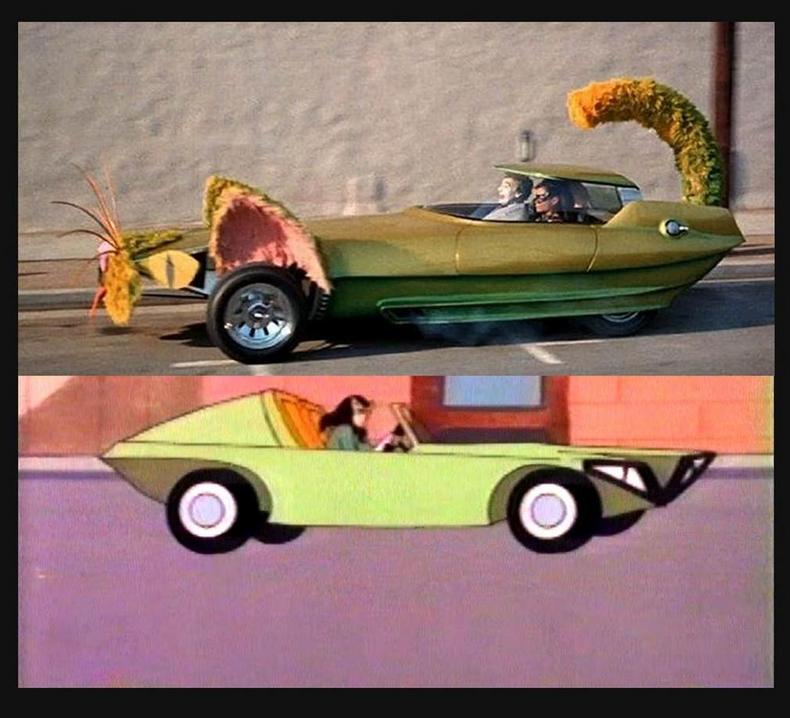 About Romero getting top billing--that's not really an issue: he was arguably the most famous guest star in the series' history, playing THE Batman villain, and with Kitt was new, I would not expect her to get top billing, no matter how much her character was the lead of the story.

I've never thought Batgirl referring to tea leaves, stars & crystal ball being part of woman crime-fighter's arsenal to be sarcasm on her part. From her first appearance, she was never portrayed as working out crimes/problems in the way Batman and Robin did in many a season one Batcave episode--in other words, acting as a detective. She was always sold as this sassy, teasing character that would prance into a room, rest her hands on her hips and out came the sass, with a "well, I"M doing this the FEMALE WAY! So there!" vibe. As I've said before on this board, Batgirl was already a cultural dinosaur by 1967 when compared to other female action characters on TV of the day.

The courtroom scene....hard evidence that Batman was not good at the kind of ribbing/satire of the legal system and/or politics. Its heavy-handed and childish, as opposed to the kind of low-blow commentary used on series such as The Monkees, or even Gilligan's Island (when coming out of super-capitalist Republican Mr. Howell's mouth).

Further, you guys mention how Batman's "civic responsibility" type comments seems more like Legends of the Superheroes, and that's a solid observation, because season three was such a watered down, kiddie version of what the show used to be, that it was more like the "Batman is all a joke" perception of the series that was so prevalent in the decade to follow.
Beneath Wayne Manor
Top

You would have thought Dozier learned a lesson that villain team-ups were not such a grand idea, since the movie--with four of the Rogue's Gallery--failed to be a runaway hit with audiences. While there were other factors leading to the disappointing performance of the movie, the big hook--the first time the biggest Bat-villains teamed-up--was anything but

Just curious, did you have something more to say here? Your thought seemed to get cut off like a chopped-up scene from a syndicated Bat-episode.
'I thought Siren was perfect for Joan.'--Stanley Ralph Ross, writer of 'The Wail of the Siren'

High C--I caught that too, and added the rest. Thanks for the good eye!
Beneath Wayne Manor
Top

An article published the week before the first Catwoman/Joker episode:

An amusing item about the production from November 1967:

December 14?? Seems to have been written before they swapped the Eartha episodes and ran "Catwoman's Dressed to Kill" on that date!
Top
Post Reply
13 posts • Page 1 of 1