Since I've been on a roll of bringing up forgotten Batman stuff, I might as well mention a short-lived villain who I had high hopes for...and was instantly disappointed by. In this case, the Banner, from Larry Hama and Scott McDaniel's brief Batman run post-"No Man's Land."

When the new creative teams for the Batman titles were announced in late 1999, the Banner was being hyped up as a major new foe, a techno-terrorist angry with the government for abandoning Gotham City after it got wrecked by an earthquake. That, plus the character name, indicated to me that this guy was going to be something like an evil version of Captain America, which would have made for a terrific Batman villain (and still would, given current politics). So in my head, I was picturing the Banner looking similar to Flagg/Patriot from Rising Stars, or even the various Captain America takeoffs Rob Liefeld had been doing at the time.

Alas, while I was expecting something akin to these: 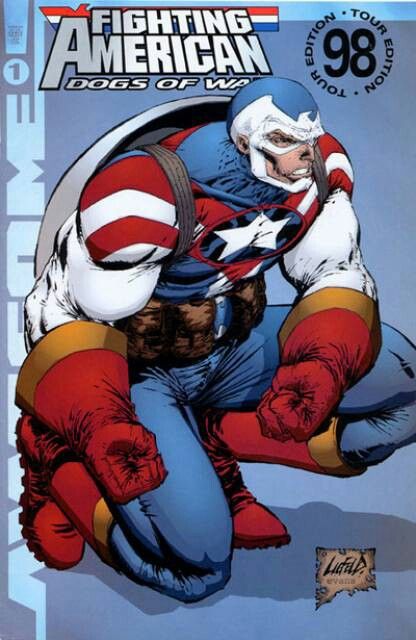 What DC actually gave us was this:

And this isn't even the original first glimpse we saw of the Banner. A very rough design sketch by Larry Hama was posted to the Internet...and was so poorly received to the point of vulgar insults that it got yanked in short order.

Also, the blurb about him being a techno-terrorist? Yeah, that was a lie. He was just a doofus with a machine gun and a band of unseen supporters hanging around him. The dude was a total pushover who got owned in his first appearance, and after a couple guest spots in Bronwyn Carlton's Catwoman book he vanished into the ether. The most he ever accomplished as shooting Batman in the head up close...but since Batman's mask was armored, he just shook it off with no ill effects. (That was a running gag with Hama; Batman would take everything from direct bullet hits to blows with baseball bats to the head and not even flinch, and every time he or someone else would talk about how his head was armored up.)

Admittedly, while there have been plenty of terrible Batman villains since 1986 -- and Hama would offer up some other total losers before he got replaced by Ed Brubaker -- I'm having a hard time imagining another villain who was so built up to be a major player and wound up being a half-baked loss. All I could think reading the Banner's debut story was "That's it?" Based on the character name and what DC had promised for the character, I expected way more than this. Keep in mind that "No Man's Land" was a massive year-long crossover story. Any new villains coming in off the shock of an event like that would have to be really splashy and cool to (a) justify the hype and (b) maintain reader interest. For this guy to be the first major new villain out of the gate...what a total waste. Even now, I still feel disappointed over the squelched potential.

Hope you guys get a good laugh out of this guy. It's pretty much all he's good for.
Top

Re: A forgotten Batman villain: The Banner