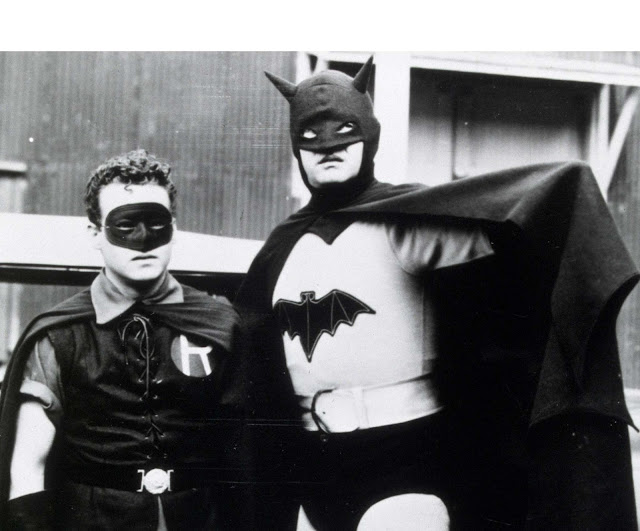 Poor Bob Lowery-- I liked him as an actor in the 40s-- he was in several Charlie Chan films, and he even had a good guest spot on SUPERMAN-- but rumors have persisted that he was the second choice for the '49 Batman and he wasn't as tall as the actor who was originally cast-- having no budget they didn't refit the suit so the ears flop and the chest emblem sits low on his stomach.

I don't know how true the whole thing is, but I know his stuntman looked a lot better in the suit that he did (check the episode where he climbs on the train).

With the discussion of the Adam West logo being too low, I tried a quick composite to see how Lowery's costume looks if we tighten the ears and shrink and raise the logo; 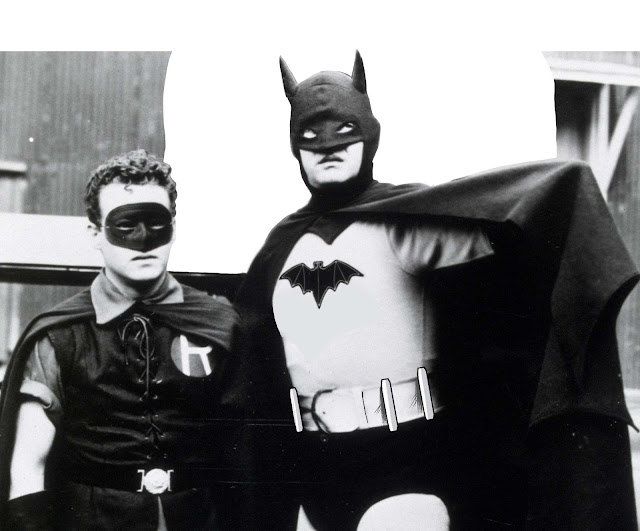 I think it looks pretty good. I didn't do anything to the ears other than straighten them. They are the size they already were-- and I added some capsules to the belt-- amazing how the logo moved up makes him look more trim.

Well, kids, this is why I buy my clothes from a tailor.
Artist-Writer
http://WWW.ANDYTFISH.COM
Top

That looks so much better!
"Batman told him a super funny joke. When the creature didn't laugh, that was proof!"
Top

Speaking of the Adam West emblem being too low, there was a Batman episode where he enters a museum and his emblem is much higher like in the comic books. Then in other scenes in the same episode the emblem is lower when he exits the museum.
I think it was the episode where the Joker had statues of famous comedians.
Top

Interesting. Given the story (urban legend?) that the '66 show was at least partially inspired by showings of the old serials at the Playboy Mansion, could it be that Adam's logo was intentionally placed too low to make it look more comical?

The real problem with the cowl is that it seems made for a much larger head. It's collapsing in on itself in the front, which is not only what brings the ears down and forward, but also makes the eye area "pucker" in. It looks like Bruce Wayne has a head like a Talosian on Star Trek.

The fact that the eye holes don't line up with his eyes tells me the idea that he was a last minute replacement has merit-- it would have taken all of about an hour to modify the cowl by a tailor but then it would have added $3 to the budget something that producer Sam Katzman would have avoided.
Artist-Writer
http://WWW.ANDYTFISH.COM
Top

AndyFish wrote: ↑Fri Feb 21, 2020 2:16 pm it would have taken all of about an hour to modify the cowl by a tailor but then it would have added $3 to the budget something that producer Sam Katzman would have avoided.

So right Andy
John was an old friend of mine and he had told me that they used a rubber band to keep the ears from flopping around. Crude and in expensive but it worked. If you look closely you can see the rubber band stretched from ear to ear across his forehead. LOL

Oh the other hand John's Robin boots were custom made and the most comfortable he had ever worn. He said he wished he still had them .
Top
Post Reply
7 posts • Page 1 of 1