An Egg Grows in Gotham.

I had a blast being part of it, so thanks for inviting me, Ben!

I was on my Kindle as I had worked earlier in the day on my PC via Skype. So I wanted to get out of my work environment. I found out later on my Kindle was doing updates or something and somehow my mic kept getting muted. I'm not always that quiet.

As my post in the recent Third Season thread indicates, I'm actually a fan of the absurdist side of the show, so I was laughing throughout most of the episodes today.

I was probably the only one, but I loved the banker getting a ticket for jaywalking. 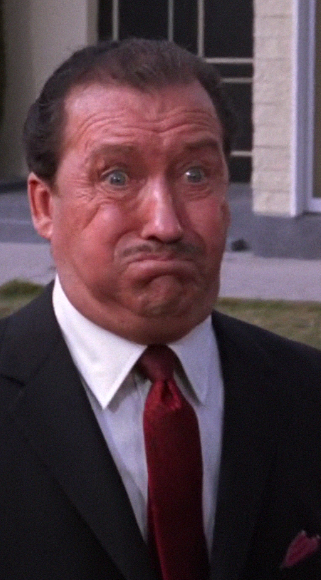 That's Jonathan Hole, who appeared frequently in one of my other favorite shows, Green Acres. He's always hilarious and is one of my favorite character actors. I thought he was funny in today's episode; then again I think Nora Clavicle is hysterical, so I'd have been outvoted.

I also enjoyed talking Sunset Strip with Scott, which we should do again sometime, or maybe in the non-Batman section. I've been reading a blog of sorts by Stevie Rachelle, who was in the band Tuff and signed to Atlantic, just as grunge hit. Definitely NSFW but a fun time to look back on.
Top

I know i'm beginning to sound like a "Holy broken record", but last night's VBC was another genuinely really enjoyable one. A big thanks as ever to all of you who have shown up to any and all of the these because you guys and gals really do make Video Bat-Chat what it is.

It's wild *flicks eyebrow* to think that it's already been 15 weeks since we brought VBC back, they've been real weekly highlight for me during this period of lockdown and I can only hope have provided a few hours of precious distraction/enjoyment for others too.

Already looking forward to doing it all over again next week!

That had to be a late night for you Ben.
dell
Top

The Carpet King's Shag-Adelic Crimes/The King Gets Crowned, Baby
'I thought Siren was perfect for Joan.'--Stanley Ralph Ross, writer of 'The Wail of the Siren'

Well it's all relative, some might say it was early by that point...It was getting on for 4am here in the UK when we got wrapped up