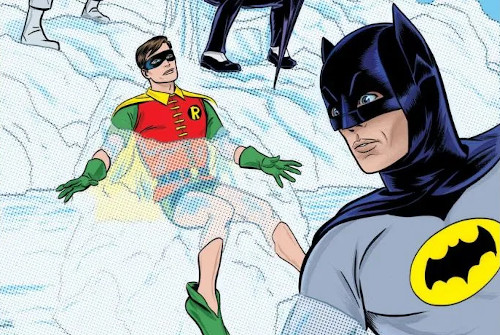 TO THE BATPOLES! podcast: We discuss the second issue of the Batman ’66 comic book, and William Dozier’s ten rules of thumb for making the series. Did the show stick to these rules? Should it have?

Not quite finished listening to the entire episode as yet, but regarding your Schimmel/Schivel debate - I reached for my copy of the first draft script for the Sanders-Freeze outing to shed some light...

Admittedly, Lorenzo really didn't hold any punches when it came to his feedback on Hodge's treatment and first draft, but that said I don't think the changes he enforced with involved the Mr Freeze's alter ego.

As for whether Adam delivered the line as "Schivel", well that's open to a potentially endless "blue dress/gold dress" style debate

Another great episode. I especially enjoyed the discussion of William Dozier's "10 Rules" memo, which I had not been aware of before.

The most fascinating thing about Dozier's memo may be that Batman hadn't even been on the air three weeks when he composed it. The note is dated Jan. 27, 1966, which was the original airdate of the series' sixth episode, "Batman is Riled."

Dozier's comments about the weakness of the Zelda episodes—and their reliance on two "heavies"—evidently came after the episodes wrapped, but weeks before they aired (on Feb. 9 & 10, 1966). It's remarkable to me that Dozier evidently judged the Zelda script a dud before seeing any ratings, particularly since the author of that script was Lorenzo Semple Jr. I wonder if Semple shared Dozier's dim view of it?
Top

Hey guys - a little late but thanks so much for the Doh Prize! I've given it a place of honor in my home:

(I don't have it sideways, do I?)
"To the medical eye, such childish claptrap means only one thing, young man: You need some sleep."
Top

For all of the flack Dozier gets from fans, his "Ten rules" memo was largely the right call, especially his asking directors to watch the pilot. If the series held to the suggestions of his memo (including Dozier having to listen to his own advice), we would have a very different series to discuss today (i.e. one held in higher regard) since that memo was pretty much flushed down the Bat-Toilet at the start of season two.

I'm not sure if keeping the Semple ship on a steady course (or failing that, keeping some of the tone and energy from the movie) would have resulted in Batman being more successful as in running say, into the 1968/1969 TV season, but I cannot help thinking the creative problems and budget short cuts that led to the disaster that was season three would not have happened at all, and if that was the case, why wouldn't ABC renew it?

My biggest disagreement with the memo was Dozier's opinion on the Zelda episodes' script leading toa "bad result" due to having two villains. The Zelda arc was--in my opinion--are among the greatest of the entire series, with Baxter & Kruschen delivering slick, intelligent villains who were as memorable as any of the "Big Four" that season.

Overall, there was still a serious edge to this 2-parter, with Aunt Harriet being the subject of one of the best cliffhangers, while the hired killers shooting themselves to death was an edgier outcome that was completely lost in the remaining two seasons. That's the kind of fate you would expect for villains on The Green Hornet, but it worked on Batman because the early direction of the show was not--contrary to popular belief--in the same tone as what would come later, such as the Joker prancing around like a goon in a gallery, wind-up mice, Bat-weddings or Bat-skeletons.

What's really amusing is that Dozier speaks of adding more gadgets to the Batmobile, when Barris often claimed he added the wealth of the cars gadgets almost from the start. Obviously, that was not the case. More Barris legend building, I suspect.
Beneath Wayne Manor
Top

The constant nervous snickering you guys do in between almost every line gets really grating. Maybe work on eliminating that and tightening up your show somewhat? A great 45 minutes is better than a meandering 90. Tighten it up and you’ll have a better product.
Top

Thanks for using my idea for the back half of the show. I enjoyed your discussion of the Dozier memo. Kudos 50-plus years later to Dozier for trying to catch lightning in a bottle and figure out the blueprint for the show. Of course, as you guys said, he could not keep it going.

Don't get me wrong, some of what he said was silly. Fewer female baddies because The Duo cannot engage them in bash-pow fights?? As you said, they can cheer from the sidelines while Batman and Robin take on the henchmen.

Dozier was right about trying to keep the look and feel of the first two arcs. Of course, that wasn't sustainable, not merely because of the loss of the Semplian ideal but because the caliber and worldview of directors changed, especially by season 3 when Oscar Rudolph basically became the house director. I'm not saying he was a terrible director--he wasn't. But he was a sitcom director, and liked to get over-the-top reactions and sitcommy double-takes. Know this: Beginning with Mr. Pilot, Robert Butler, who directed the first two arcs and three of the first six, most of the season 1 helmers had experience directing dramatic shows.

In the spring of 1959, when Rod Serling was starting to put together The Twilight Zone, his people researched potential directors, and for comedies, they came up with four names. One was Oscar Rudolph. (This info is from Martin Grams' book, The Twilight Zone: Unlocking The Door To A Television Classic). Rudolph directed 30 of the last 52 episodes of Batman.

Granted, as you guys said in your season 2 wrapup (on Aug. 17, 2017!!!), once Dozier decided to mine his Rolodex for guest villains, the slide in quality was somewhat inevitable. I know it's pure speculation, but I wish, in an alternate universe, that Bookworm creator Rik Vollaerts could have been the script editor post-Semple rather than Charles Hoffman. Certainly Vollaerts had a better feel for fantasy/sci-fi than Hoffman. In the spring of 1968, he put his proverbial hat into the ring for Star Trek's season 3 script editor, per author Marc Cushman. Whether Vollaerts would've been interested in such a gig in May/June 1966 is unknown.

As for #7, the infamous 'sexy dame' note, I should point out that Joan Collins was made a Dame of the British Empire in 2015.

'She had a devastating, hypnotic effect on all the men.'--A schoolmate describing Joan Collins at age 17
Top
Post Reply
8 posts • Page 1 of 1