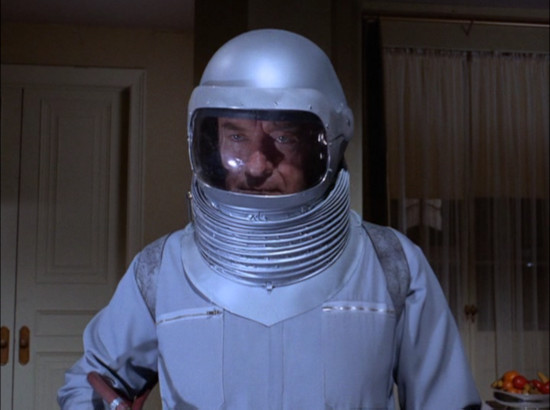 Mr. Zero? Dr. Schimmel? No, Mr. Freeze! In Max Hodge’s first draft of “Instant Freeze,” the comics villain Mr. Zero, for reasons we discussed last episode, became Mr. Freeze. But the script contains many more references to his “real” name, Dr. Schimmel, than made it to what was broadcast. Why? Where’d this unexplained parade come from? What would the show have been like with more animation effects on the screen, outside of the Batfights? All this and more as we dig into a preliminary plot summary and the full first draft of Mr. Freeze’s first TV appearance.

Not literally, of course. I'm sure he's sweating up a storm in there.

Imagine if they'd added some colored lights, maybe baby blue, into the helmet just below his chin. Maybe some Darth Vader-ish knobs and colored switches on a chest plate. Then this costume would've been more on-par with the other villains of the show.
- Boy Genius
Top

Another excellent show, guys. Everybody might not love a parade, but I sure love the script episodes!

What strikes me about this one, and all the early first season ones for that matter, is the attention placed on how The Duo should act and sound, and the overall tone and feel of the show, e.g. the GCPD shouldn't save The Duo. You occasionally get snippets of that later, but rarely.

Many of the annotations by Horwitz later on, especially by mid-season 2 and season 3, are less about quality control and more about streamlining the process. That could mean less dialogue, fewer set pieces or fewer characters, mostly in the vein of budget savers. Yes, that is important, and it takes place in season 1 too, but making sure Batman and Robin are written correctly eventually became an afterthought, particularly in Robin's case.
'I thought Siren was perfect for Joan.'--Stanley Ralph Ross, writer of 'The Wail of the Siren'

'She had a devastating, hypnotic effect on all the men.'--A schoolmate describing Joan Collins at age 17
Top
Post Reply
3 posts • Page 1 of 1