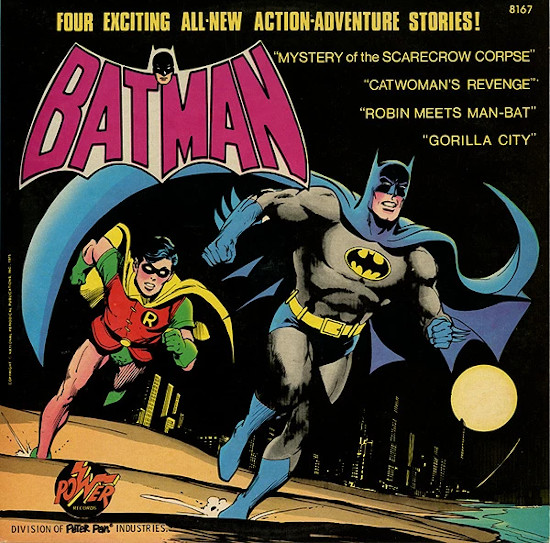 We somehow missed Power Records stories of Batman and other superheroes in our youth, but guest JB Anderton has turned us on to them. We discuss what these Bat-records taught 1970s kids about psychosurgery, low production quality, super gorillas, and … death!?

Thanks for having me on the show. Really enjoyed our conversation! Since our recording, I ordered the '66 Batcave playset from a third party within the U.S. as none of the Chicago-area Target stores are stocking any of Mcfarlane Batman '66 merchandise. It should arrive as early as today (fingers crossed).

UPDATE: It arrived the next day. Pic in the thread in the "Bat Merchandise" section.
BAT 77 - My '70s Batman Childhood
Subscribe to the Podcast at http://bat77.libsyn.com
Visit me on Facebook.com/bat77podcast
Top

Great episode. JB was the perfect guest to discuss this with. I'm sad to hear his own podcast is ending soon, though.
- Boy Genius
Top

Power Records, where so many characters sounded like escapees from The Bowery Boys movies pretending to be superheroes. Yikes, and then some. What's strange is that the late Peter Fernandez's voice leaned in that, "Hey--youse punks wanna sock inda mouth??" direction while he voiced Power Records characters, but years earlier, his work on Speed Racer did not sound that way at all.

I have vivid memories of Power Records, with my family getting a few. Strange thing is that initially, we played them often, but the interest in PWs dropped off of a cliff only a few months after getting them. I've always believed that was due to being comic collectors who had the issues the PWs were based on (the Marvel titles, in any case), so aside from the novelty of hearing voices applied to superheroes, it was a one-shot adventure, one-time interest, while the real comic stories & characters moved forward.

You guys had a side discussion about Batman big screen actors, and for me, the list of great Bat-performances is a small one, as most never captured the kind of behavior one would think a Batman would have if he were a real person, or show how experienced he is by not coming off like a cosplayer prancing around at a comic convention (essentially, balding, comedic nerd Keaton, smirking Clooney and stranger-than-fiction Kilmer). On that note, only Bale and Affleck almost perfectly delivered Batman in ways paralleling elements of his 70s - 90s character arc, with the bonus of Bale giving us a look at the character early in his career, while Affleck have a spot-on performance as the older, to-the-point and jaded Batman, which is the way he's often written in Bat-books of the past 30 years.
Beneath Wayne Manor
Top
Post Reply
4 posts • Page 1 of 1